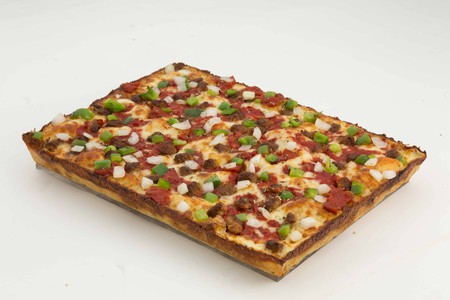 Signifying and celebrating the diversity of Detroit, our list of iconic food dishes contains unique inventions, refined delicacies, simple American classics, and fusions of cultures. From breakfast until the early hours, these 10 specialties are ready to fuel your next trip to the Motor City.

Distinctive from its Chicago counterpart in several ways, Detroit-style deep-dish pizza is among the city’s most iconic dishes. Since the 1940s, a number of famous pizzerias and chains, from Buddy’s and Loui’s to Cloverleaf and Niki’s, have been serving up these square delights to hungry locals and visitors. Famous for their buttery and crisp crust, subtly spiced tomato and mounds of mozzarella, what’s not to love. 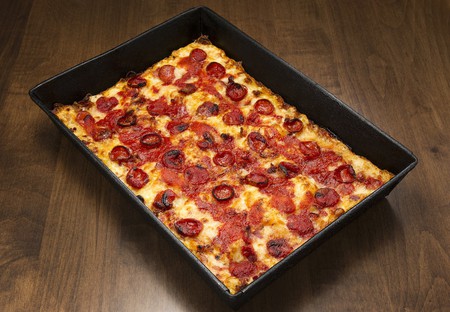 The Motown Museum Pizza at Buddy’s | Courtesy of Buddy's Pizza

Of all the cities that have their own spin on the Coney Island hot dog, Detroit’s may just be the most iconic. Made from a natural skin casing hot dog, chili, mustard and sweet chopped onions, it’s a relatively straightforward proposition, but a satisfying one nonetheless. Its fame has certainly been helped by the healthy rivalry between the city’s two most famous Coney Island restaurants, which just happen to be next door to each other. 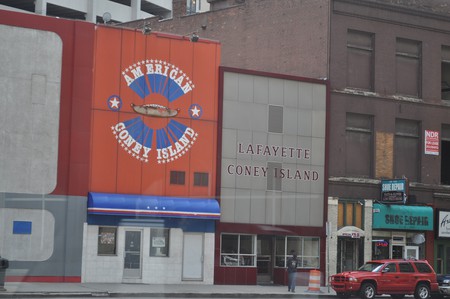 As a true example of “fusion” food before that was even a thing, the Asian Corned Beef chain was started in 1978 and now has six locations across the city. Most famous for its range of Egg Rolls featuring corned beef, cheese, cabbage and other fillings all wrapped up in a crispy fried roll, it’s a cheap and typically Detroit snack for many residents.

Speaking of cheap, ideally late-night eats, this long-standing fast food institution churns out burgers, sliders, hot dogs and coffee 24 hours a day, seven days a week. With two locations, one in Southwest Detroit and one in Madison Heights, many a night out in Detroit ends with a bag full of greasy Telway sliders and barely a dent in your wallet. Cash only.

Restaurant, Seafood
Facebook
Email
Twitter
Pinterest
Copy link
Share
Map View
Another timeless Detroit restaurant and dish, Scotty Simpson’s Fish & Chips opened in 1950 and proudly has had only three owners since. Their iconic fish comes in a golden, secret recipe batter, served with hand-cut chips, unique coleslaw, tangy tartar sauce, and a roll. It’s a combination that hasn’t changed in over 60 years, much like the décor.

Slows has taken Detroit barbecue by storm since opening in 2005, receiving much national and regional media coverage. It was featured on Man vs. Food in 2009, during which Adam Richman sampled the Triple Threat Pork and the Yardbird sandwiches, the latter of which went on to finish in the top three on his subsequent show, Adam Richman’s Best Sandwich in America. Slows now has four locations for you to sample that famous Yardbird, which has pulled chicken in honey mustard sauce, mushrooms, cheese, and bacon.

The Yardbird remains awesome. Always here for you. #yardbird#amishchicken#foodpics#detroit

Dutch Girl Donuts has been a constant in Detroit since 1948. Their delicious and time-honored donuts are excellent value and have remained remarkably unchanged over the years. Still in the same family that founded it and a relatively small operation, quality has never been jeopardized. It’s also open 24 hours a day for those late-night cravings.

Not a dish but certainly a Detroit icon, the Boston Cooler is a pretty simple, two-ingredient drink. Also known as a Vernors float, it is made with Vernors, a ginger ale from Detroit, and vanilla ice cream. Some say the ice cream also has to be from Detroit, Stroh’s in particular. The only question, then, is whether to simply float or to blend. Find them on menus around the city.

The ham sandwich may be a simple dish, but when done right, it can certainly be iconic. Located on Michigan Avenue, Mike’s Famous Ham Place has been perfecting its ham since 1974. The ham sandwich has an impressive ham-to-bread ratio, with the ham being cut into thick chunks right off the bone. If Mike says it’s famous, who are we to argue?

A Big Boy is not exactly an iconic Detroit dish, but the chain remains a Michigan staple. The company has its headquarters in Metro Detroit as well as having 70 of its 78 locations in Michigan. The signature Big Boy was the original double deck hamburger, predating the Big Mac and Big King, making it pretty iconic.