Porchfest: The Grassroots Music Festival Played on Porches Throughout Boston 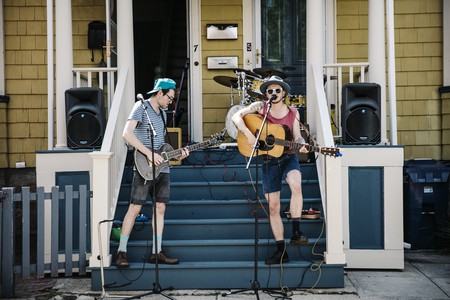 Every year in July, a warm summer breeze carries a medley of melodies across Boston’s Jamaica Plain neighborhood. Stroll along Centre Street and you might find yourself drawn to Afro-pop tunes, a brass band or a poetry reading. This is Porchfest, a festival where musicians and artists perform for free in various outdoor spaces, which has been bringing communities across North America together since its inaugural event in 2011.

On the lush lawn of the Loring-Greenough House, music lovers sprawl on picnic blankets and bop their heads to the beat of a steel-drum rendition of Justin Bieber’s ‘Sorry.’ Sprinkled across nearby Eliot Street, musicians draw passers-by to porches, yards and driveways. A folk tune strummed on an acoustic guitar emanates from the stairs of the First Church, while one singer croons a song befitting of a Parisian café from the stoop of a stately Victorian, shaded by a curtain of ivy. Sipping lemonade and savoring popsicles, everyone can find a performance that hits the right note at Porchfest. 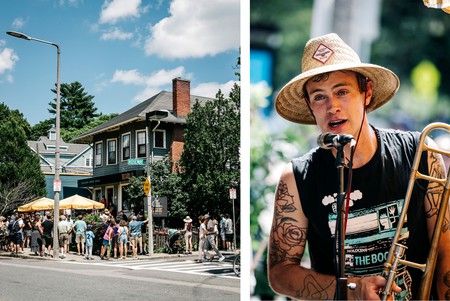 Porchfest is a DIY outdoor music festival where musicians set up shop on various outdoor stoops and spaces and perform for free. The event originated in Ithaca, New York, in 2007 and featured just 20 bands. The idea itself emerged from a conversation between neighbors and some outdoor ukulele playing, but eventually, the festival’s impact echoed for miles. Now, musical talent across the United States and Canada can jam out at nearly 130 Porchfests, with more popping up each year.

The first Boston-area Porchfest took place in 2011 in Somerville. Led by the Somerville Arts Council, the festival is still going strong, with 240 music groups attending the 2019 event. The Somerville Porchfest paved the way for three more to emerge in Boston Proper (Jamaica Plain, Roslindale and Fenway as of 2018) and 14 across Massachusetts. 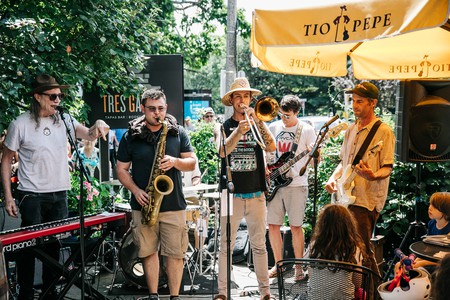 Jamaica Plain’s vibrant streets have historically been a haven for artistic types in Boston, making the neighborhood the perfect canvas for a Porchfest to take place. “I live on a street where I can hear an opera singer warming up and a guitar player working on a solo,” says Rick Berlin, a Jamaica Plain (JP) resident and musician who has played Porchfest nearly every year. “This is something that suggests it’s still alive as an artistic location.”

After JP Porchfest’s first year in 2014, the festival expanded its scope to include not only musicians but also dancers, poets, comedy, theater and even circus arts – the only Porchfest ever to do so. It also grew from 65 bands to 180 artist groups in its sixth year, which took place on July 13, 2019, and was a genre-spanning hit. It featured everything from Afro-pop tunes by Kalifa and Koliba to Middle-East- and Baltic-inspired art rock from Minouchka and poetry readings from members of Never Too Late to Be a Poet (a senior writing group) – all playing a part in attracting and entertaining this year’s nearly 10,000 attendees. 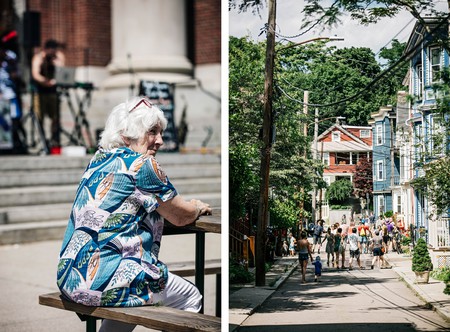 The JP Porchfest also stands as a shining example of Porchfest’s mission to bring communities together through art, taking special care to ensure diversity and inclusion spanning age, class, race and performance genre. This diversity is not only evident in the festival’s performers but also in Porchfest’s audience members. Everyone from elderly couples to young LGBTQ families pushing strollers meander up and down Centre Street, each following a different enchanting tune.

“In our communication with other Porchfests around the country, we are told that JP Porchfest is unique because of our diversity mission,” says Mindy Fried, who co-founded the festival with Marie Ghitman in 2014. “We live in a neighborhood that is considered very diverse but, in fact, is segregated by economics and race and culture. We wanted the festival to be a mechanism to bring people together across the divides of race and class and culture and immigrant status.” 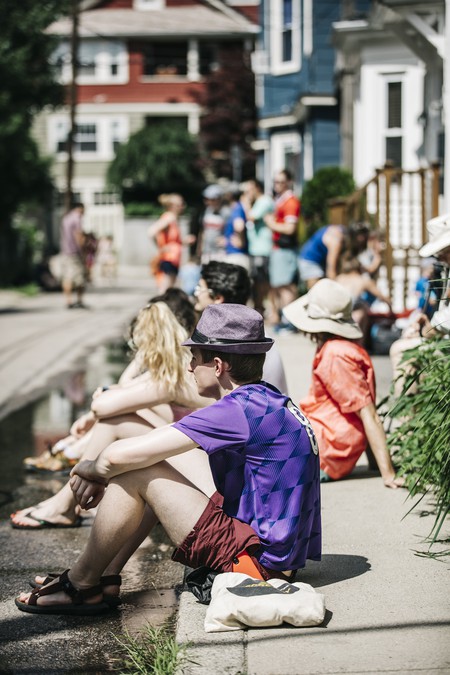 The pair also engaged the neighborhood beyond its musical talent. Fried and Ghitman prompted residents to offer up their porches in order to include artists who don’t have outdoor spaces and who don’t live in Jamaica Plain. They also partnered with community activists and organizations – such as the Jamaica Plain Neighborhood Development Corporation, which manages affordable housing in the neighborhood – to encourage a variety of individuals to partake in both the performance and planning sides of the festival. 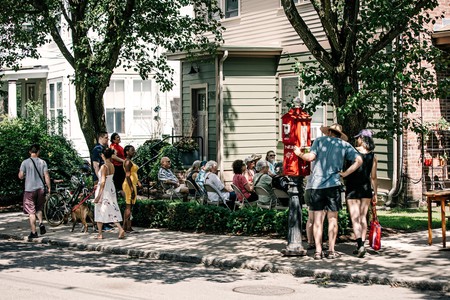 Accumulating accolades such as a community service award and the title of ‘Best Neighborhood Festival,’ Porchfest’s impact extends beyond the yearly event. “In our effort to build community, we’ve realized that it’s not enough to organize one festival per year. So, we have begun to develop what we call wraparound events throughout the year,” says Fried. “This is one way that we can keep the community connected, pay artists for performing (which we can’t do in such a large event like Porchfest) and raise money for local non-profit groups.” 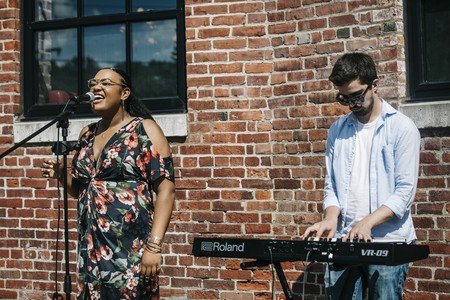 In 2019, Ghitman and Fried passed the Porchfest torch on to Devin Ferreira, a long-time participant, and Eli Pabon, the previous coordinator of the dance porch – the festival’s designated space for local dance troupes to show off their moves. The pair intends to build on Porchfest’s strong foundation and continues to foster the togetherness the festival has created among JP residents and participating artists.

“The most beautiful part of it is the community building that ends up happening,” says producer Eli Pabon. “Most of the performers and porch hosts don’t meet until the day of the event. It’s so great to read the email threads the day after the event, with performers gaining new fans and porch hosts excited to host those performers the following year.” 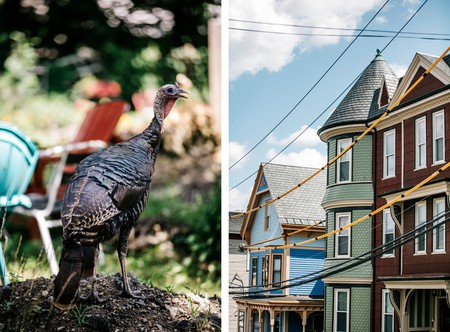 In addition to the respect and appreciation between artists and Porchfest patrons, Berlin confirms this camaraderie exists between performers as well. “It’s not judgmental, so it’s a liberation for people who might never have played in front of an audience before, as well as for people who play esoteric music and have a hard time finding a venue,” the local musician says. “You may not know everybody, but you feel a sense of belonging – at least for a few hours – in this divisive world we’re in right now. Music is a glue.” 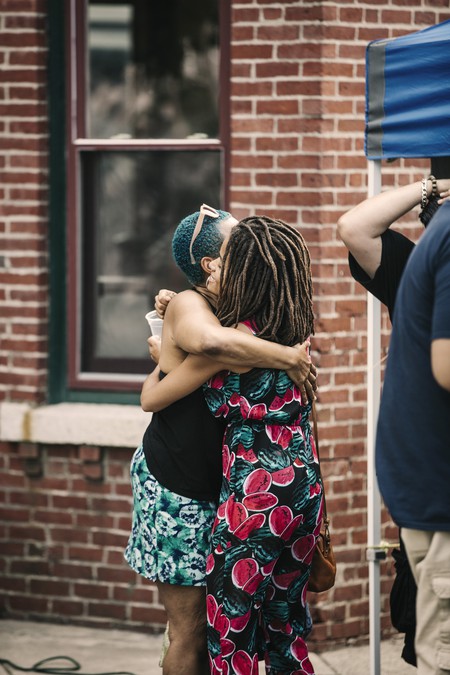 The JP Porchfest has been a launching pad for many rising artists, such as indie rockers Damn Tall Buildings, who drew a 300-person crowd during their 2016 appearance. Lending an ear to these up-and-coming stars and supporting Boston’s local music scene provide a glimpse into the ethos of Porchfest, but they are no substitutes for attending the festival, swaying to the beat and feeling a sense of belonging. “Porchfest – it’s almost like you’re back in the ’60s,” says Berlin. “Friendship and music and love and all that stuff. But this is without the acid.” 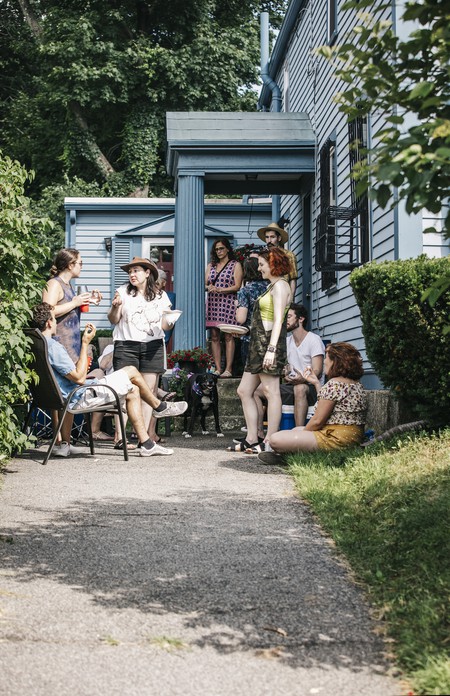