How To Spend a Weekend in Boston 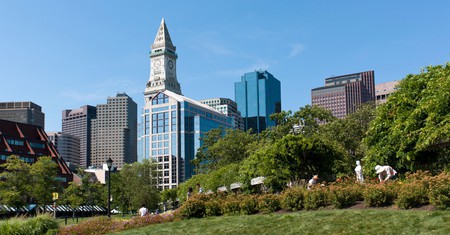 Boston is a relatively small and very walkable city, making it the perfect place to spend a long weekend without ever getting in your car. Whether you’re a foodie, a history buff, a sports fan or all of the above, Boston is New England’s cultural center and offers great options for everyone. 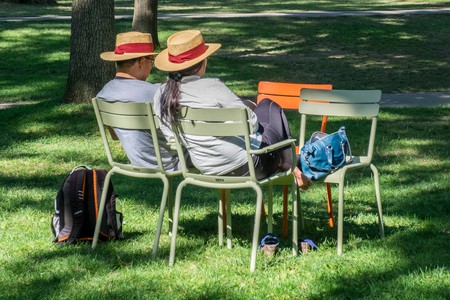 Friday: The North End, Beacon Hill and the Harbor

Shake off your travels with a coffee and a breakfast sandwich in the North End, a historically Italian neighborhood famous for its cobblestone streets lined with mom-and-pop Italian food joints. Lavazza and illy supply just about every business here, except for the Thinking Cup, which serves Stumptown coffees and freshly baked pastries and sandwiches. You’re sitting on the Freedom Trail here, so it’s a great jumping-off point for history buffs.

Walk around the charming cobblestone streets on your way south to picturesque Beacon Hill, Boston’s preppier neighborhood. Immaculate 19th-century brownstones line narrow streets, with green plazas and antique gas lamps that add to the atmosphere. It’s a small neighborhood that you can cover by foot easily in an hour, and you don’t need to be Ansel Adams to get great photos here. 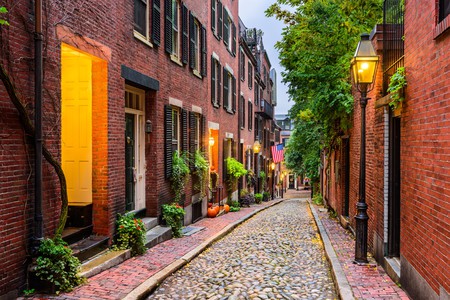 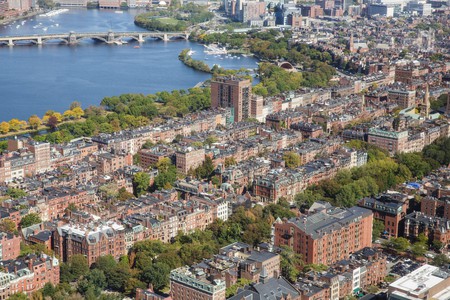 For lunch, get your first taste of New England seafood at The Barking Crab. This place has all the staples, including oysters, lobster rolls, clam chowder and fish tacos, but the covered outdoor seating is its killer feature. 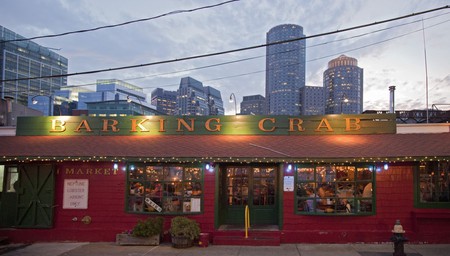 It’s hard to beat the views along the Boston Harborwalk, which is just a short walk across the channel. This pedestrian-only walkway along Boston Harbor showcases its many piers, marinas and waterfront parks. Not only is it much less crowded than the Freedom Trail, but it also offers easy access to some of Boston’s major attractions, such as the New England Aquarium and Faneuil Hall Marketplace.

Faneuil Hall is an old meeting space and market building from 1742 that the city reused and converted into dozens of retail shops and restaurants. With jugglers, musicians and all kinds of buskers performing, it’s a lively spot that’s fun to walk around.

A brisk walk from Faneuil Hall is the New England Aquarium. It has an impressive and majestic interior with a giant, four-story cylindrical tank in the center, complete with a penguin colony surrounding the bottom. The ethereal glow is really something to see. However, if you don’t have time to wait in line, the seals in the outdoor tanks are open to the public and worth a pit stop for a quick peek. 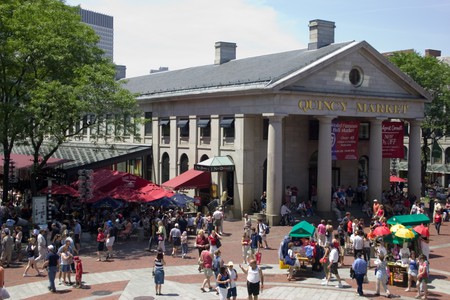 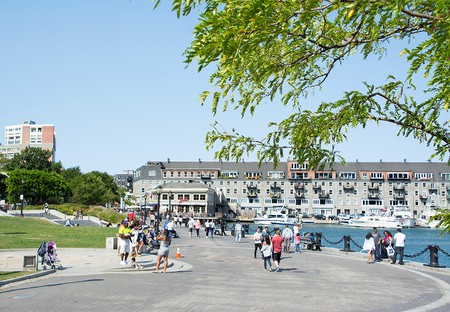 For happy hour (or oyster hour as it’s often called in Boston, due to strict liquor laws), the Outlook at The Envoy Hotel might have better views than any other bar in the city. Located on the roof, which is open to the public, it’s an open-air bar with 180-degree views of Boston’s skyline and harbor. As it’s popular with the after-work crowd, it’s best to get here before 4.30pm to avoid waiting in line.

Walk or take the subway (called the T) to the South End and be spoiled by Boston’s hippest dinner spots. The neighborhood features rows of gorgeous brownstones and is considered one of the trendiest areas for restaurants. Head to Toro Boston for Spanish tapas for the serious foodie. Visit Kava Neo-Taverna for Greek and Mediterranean cuisine or the high-quality gastropub, The Gallows.

The Museum of Fine Arts (MFA) is open until 10pm on Fridays, making it a surprisingly fun pre- or post-dinner activity. It also offers a rare chance to explore the museum when it isn’t crowded. Its world-class collection is diverse (ranging from Modern art and paintings by European masters to Japanese samurai garments and Egyptian mummies). Also, it serves beer and wine every first Friday. While it could take weeks to see everything here, the purchase of a ticket allows one additional re-entry within 10 days by using the same stub. The key here is to prioritize – check out the Art of the Americas Wing for sure and maybe another gallery or two based on your interests. 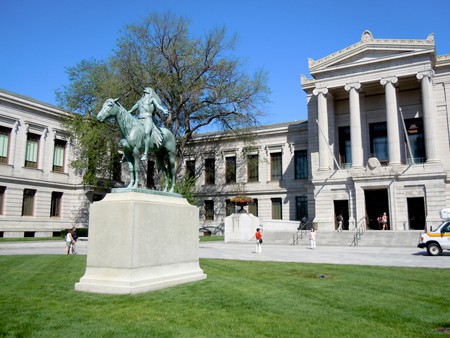 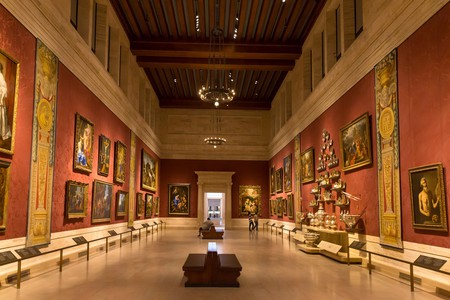 Afterward, head back to the North End and finish the night with something sweet. Mike’s Pastry pulls the crowds, but you’ll find a better ambience at Caffé Vittoria, an old-school Italian café with antique espresso machines and home-made gelato. Business picks up with the after-dinner crowd, making this a fun place to wind down or perk up before a late night out. 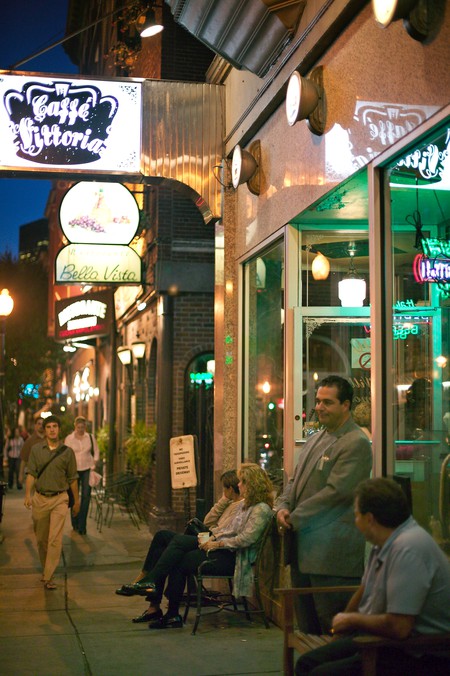 Saturday: The Back Bay and Cambridge

If Boston’s coffee scene conjures images of Dunkin’ Donuts, think again. Crouched in the shadow of the city’s South Station bus and train terminal, Gracenote Coffee might be Boston’s smallest coffee shop. However, this standing-room-only roaster in the Leather District is first class, offering some of the best coffee in the region.

After getting some fuel, head to the Boston Public Library (BPL), a vital multimedia cultural center. Part library, part architectural heritage site, part theater and part National Public Radio station, the BPL is a great example of how rich a library can be in the culture of a city. Peruse the collection and architecture here as well as surrounding Copley Square, which is also home to the Boston Marathon finish line.

Just half a mile away, the Prudential Center offers the most sweeping panoramas of the city and beyond. The Skywalk Observatory at the top of the Pru boasts 360-degree views accompanied by a personal audio tour that tells you what you’re looking at along with the history of the sights. 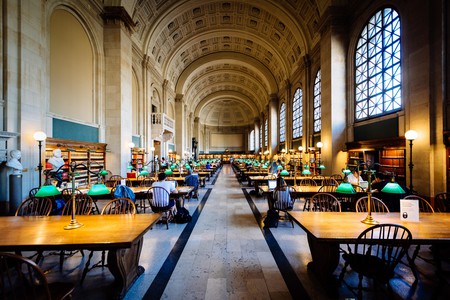 Take the T across the river for lunch in Cambridge. Darwin’s Mount Auburn café is a Harvard hang-out the best sandwiches in Cambridge. It also sells groceries and craft beer. If it’s a warm and sunny day, consider taking a picnic lunch over to the shores of the nearby Charles River.

Close by, Harvard Yard looks just like it does in the movies. Regal red-brick buildings with quaint green quads make this place unmistakably New England. It’s worth checking out, as are some of the underrated open-to-the-public museums sprinkled throughout campus. However, to end your collegiate architecture stroll here would be a shame; instead, continue to Harvard’s nearby rival, the Massachusetts Institute of Technology (MIT). The architecture here offers a counterpoint, from Frank Gehry to Finnish minimalism. MIT’s approach is decidedly less traditional but no less attractive. 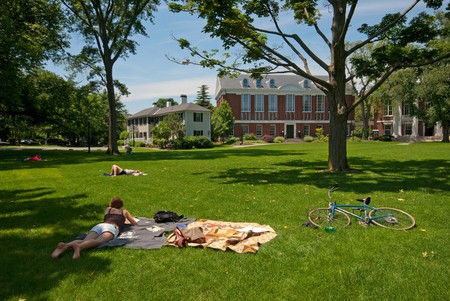 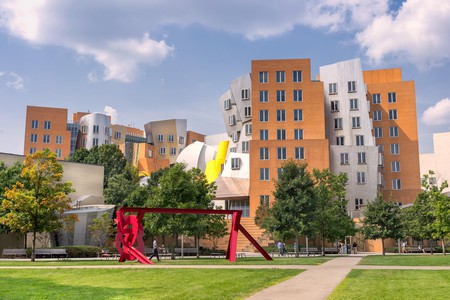 As you might expect, Boston has a boatload of Irish pubs, but if you want the real deal, head to The Druid in Cambridge’s Inman Square for an afternoon pint. This neighborhood bar has a welcoming atmosphere without trying too hard, with friendly bartenders, cheerful decor and live music most nights.

For dinner, Oleana is legendary for its consistently incredible and innovative Middle Eastern cuisine. Even if you can’t snag a reservation at this popular spot, the first come, first served seats at the bar are just as fun.

After eating, check out the Cambridge nightlife. The Sinclair might be the best place to see a concert in Boston. It’s not too big, but not so small that you’ve never heard of any of the musicians. Music genres vary, but most performers here are Pitchfork darlings that haven’t hit the mainstream quite yet. Chances are that the next time these bands pass through town, they’ll be playing somewhere bigger.

Sunday: The South End, Back Bay and Fenway

To begin your day, the South End Buttery offers some of Boston’s best pastries, which you can eat at the café or take to go if you get a late start.

The South End is the center for Boston’s independent shops and restaurants. On Sundays from May through October, it also hosts the South of Washington (SoWa) Market, a colorful collection of pop-up shops and food vendors on Harrison Avenue. Even when the market isn’t open, the South End’s independent boutiques offer some of the finest shopping in the city, from home furnishings at Lekker Home to dapper clothing at SAULT New England.

For lunch, walk to Trident Booksellers and Café in the picturesque Back Bay. The restaurant sits right in the middle of an independent bookstore, making it the perfect place to grab a snack while browsing the stacks for your next read. This busy café is popular for brunch and has plenty of vegetarian options. 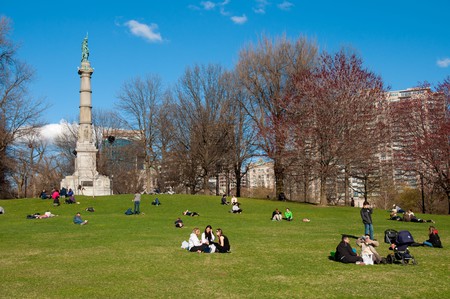 Afterward, meander down Newbury Street for high-end clothing and other shops. Pop into whatever suits your fancy, from quirky Newbury Comics to The Fairy Shop/Harry Potter Shop or the interior of Gothic Revival cathedrals and numerous art galleries. This stretch will take you across the Back Bay until you get to the center of Boston. Take a break from shopping and admire the city’s iconic twin parks, Boston Public Garden and Boston Common. While small, they’re packed with activities and winding paths between flowers and draping trees, offering immaculate gardens flanked by Boston’s tallest skyscrapers. 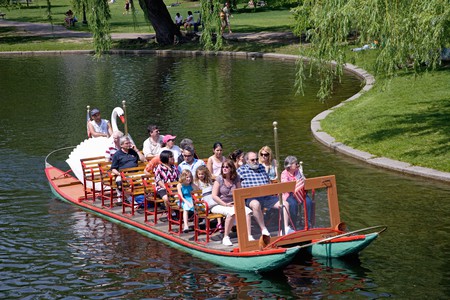 Riding the Swan Boats in the Boston Public Garden is a must | © Visions of America, LLC / Alamy Stock Photo 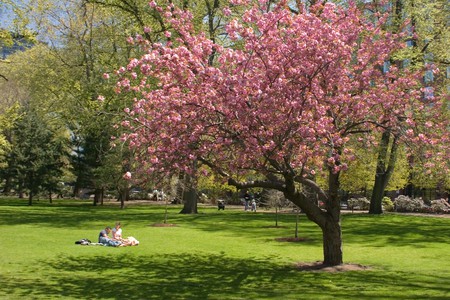 Head up the Commonwealth Avenue mall towards the Fenway neighborhood for dinner at Hojoko, a Japanese izakaya at The Verb Hotel. This casual sibling of high-end sushi restaurant O Ya serves funky Japanese dishes with a rock’n’roll theme.

Starting in the afternoon or early evening, there’s no more quintessential experience in Boston than going to a Red Sox baseball game at Fenway Park. The atmosphere is electric, and on a warm evening, there’s nothing like it. Look online for tickets, or go on a tour of the ballpark if there aren’t any games that day. If you’re coming to Boston in baseball’s off-season, chances are the city’s basketball team, the Celtics, or the ice hockey side, the Bruins, are playing at TD Garden near the North End. While not quite as historic, they’re still a great experience to witness the insanity of Boston sports fandom. 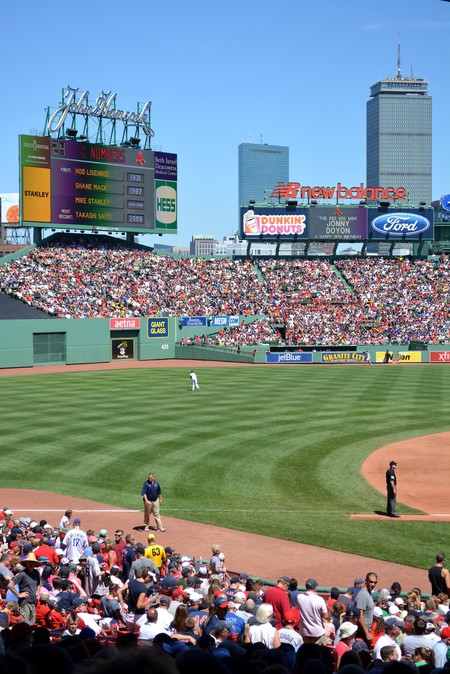