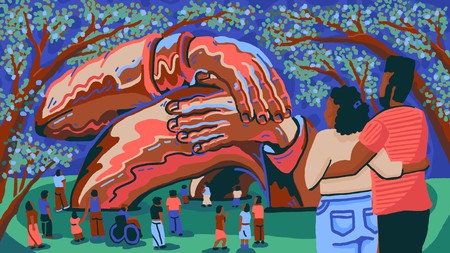 The Embrace memorial in Boston honors the time Dr Martin Luther King Jr and Coretta Scott King lived in the city, their contributions to the Massachusetts capital, and their legacy. The organizers hope the statue will open dialogues in a city still grappling with inequality.

In late April 1965, a month after his famous march from Selma, Alabama, Martin Luther King Jr gathered a group of 22,000 protesters in Boston’s Roxbury neighborhood. Alongside his wife, Coretta Scott King, he marched from Carter Playground, through a light rain, almost three miles (4.8 kilometers) to the Parkman Bandstand on the Boston Common. Though King attended Boston University and lived in the city for three years, this would be his only major public speech in Boston.

Now, over 50 years later and just steps away from that bandstand, The Embrace memorial, a 22-foot-tall (6.7-meter-tall) bronze sculpture of interlocking arms, is set to go up in his and Coretta’s honor. The piece is meant to be a tribute to the Kings, their love and their work fighting injustices together. The statue also puts a focus on the continued fight against discrimination in the city today. 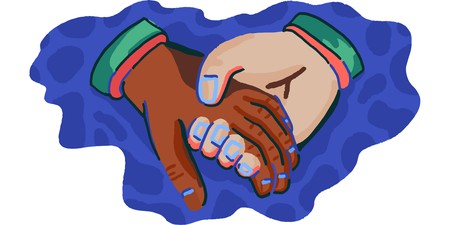 The idea for The Embrace originated in September 2017 when King Boston, a private, non-profit foundation, began discussing creating a memorial in honor of both Martin Luther King Jr and Coretta Scott King. The organization aimed to highlight not only the Kings themselves but their work and time in Boston, where the couple met and began their activism. King Boston held a competition and chose the design by Hank Willis Thomas and the MASS Design Group from 126 applicants. The interlocking arms were inspired by a photograph of the Kings in a hugging embrace after MLK learned he received the Nobel Peace Prize in 1964.

“I think [The Embrace] will put love in the public square again,” says Marie St Fleur, executive director of King Boston (which is funding the sculpture) and a former state representative in the Massachusetts Legislature. “And not romanticized love, but that hard love that requires rolling up your sleeves, having some conversations and facing the challenges together so we can get to the next better place… It was a love that was built on struggle. The love that was built on the harsh challenges that they had to endure to break the hold of segregation.”

The Kings themselves had a close history with Boston. Martin Luther King Jr first arrived in the city in 1951 to work on his PhD in systematic theology at Boston University, where he learned about the work of Mohandas (popularly known as Mahatma, meaning ‘great soul’) Gandhi, which fostered many of his ideals of nonviolence. Before he graduated, he met Coretta, who was studying opera at the New England Conservatory of Music. The couple married in 1953 and had their first home together in the South End.

King, who often referred to Boston as a second home (he was from Atlanta, Georgia), left the city in the mid-1950s and didn’t return until April 1965. This time it was upon invitation from the Massachusetts Legislature, which invited King to speak in front of a joint session. The next day he led his only march in the city to Boston Common.

It was there, at the Parkman Bandstand, where King spoke for about 25 minutes. He spoke about the racial injustices – especially in terms of housing, economic disparity and discrimination – facing Boston’s residents of color and predominantly black neighborhoods.

“The vision of the New Boston must extend into the heart of Roxbury,” he said, according to The Boston Globe newspaper published the day after. “Boston must become a testing ground for the ideals of freedom.”

Over 50 years later, those ideals of freedom are still in continuous development. Boston, which went through the violent busing crisis in the 1970s and struggled with de facto segregation well into the ’80s, has made large strides in becoming a more tolerant place. However, the city’s black residents, who make up over 23 percent of Boston’s population, still experience inequalities in many subtle and not-so-subtle ways, even as the city continues to become more diverse.

In May 2019, a group of black students visiting the Museum of Fine Arts, Boston said they were subjected to racist remarks from staff members and other guests. Athletes visiting Fenway Park have reported several incidents of racist slurs and taunts coming from the stands. On top of that, a 2015 joint study shows the median net worth of a black household in Boston is just $8 compared to $247,500 for whites. That same study also found that 80 percent of white residents own a home compared to one-third of black residents.

“Boston is a beautiful and amazing place. But Boston has always been a paradox,” says St Fleur. The city holds a strong history of prominent abolitionists and those who fought for equal rights, as well as a long history of racism. The Embrace is meant to become a stepping stone to addressing those inequities. “There’s a history of the good, but there’s also a history of challenges [in Boston],” explains St Fleur. “And we need to have both of those histories exposed so that we can move forward and continue to build that shining city on a hill.” 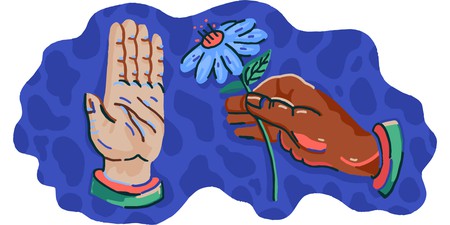 Situated in a spot on Boston Common that overlooks the Massachusetts State House and the Parkman Bandstand, where King spoke in 1965, The Embrace provides a “platform for continuing [the Kings’] work throughout the city,” according to King Boston.

Francie Latour runs a diversity initiative at the Broad Institute of MIT and Harvard and runs Wee The People, a social justice project for kids. She first heard about the King Boston project when The Embrace sculpture was announced as a finalist. However, Latour says she wants to see more.

Latour thinks Boston should take a more direct look at how racism has operated in the structures of the country, similar to what King spoke about at the Parkman Bandstand in 1965. She wants to see more portrayals or acts that can better “speak to my lived experience as a black person.” In order to address the racial gap, she says the city should investigate the lopsided metrics in income, health and wellbeing, and lifespan.

“What Boston needs I don’t think is any different than what we need as a society, which is to unlearn what we’ve been taught for a very long time about how things got to be the way they are,” says Latour.

King Boston believes The Embrace is at least a step in the right direction. “I think we have to tell the full story,” says St Fleur. “I think that’s what that space allows – for us to tell the inclusive story about the better ways to open up on the tough things that occur and then how we move together towards the solution. The memorial on the common provides a space for reflection and highlights the fact that Dr King and his wife left us a legacy of the importance of nonviolence… and their true belief that love could push out the darkness.”

King Boston plans to open a Center for Economic Justice in Roxbury that’s currently in its early planning stages. A partnership with the Twelfth Baptist Church, where King attended services, for MLK-related programming is also in the works. The last step of the organization’s full $12 million project is creating a documentary on the Kings and their work in Boston. They plan to unveil the memorial in 2020.