Everything To Know About the Boston Duck Boats and Tours 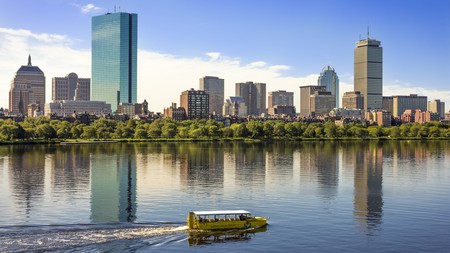 From Boston’s historic homes to the bustling waterfront, it can be a little overwhelming to make sure you hit all of the city’s most noteworthy sites. But there isn’t much of a better way to fit everything in than the Boston Duck Tours.

Since 1994, the “duck” boats have been a staple in the Massachusetts capital, carrying thousands of passengers in peak season across the city. Today, the fleet consists of 28 replica World War II amphibious landing vehicles that take you through Boston and into the Charles River. Here’s everything you need to know about one of Boston’s most popular tours.

With tours taking place every day from the end of March through the end of November, the Boston Duck Tours run every 20-30 minutes (depending on departure area) from 9am to about an hour before sunset. Passengers have the ability to get tickets and board at three locations, including the Prudential Center, Museum of Science and the New England Aquarium.

Once onboard, local drivers take guests on an 80-minute tour of the city, hitting numerous historical and significant sites along the way. You’ll slow down to see the Boston Public Gardens, Beacon Hill, JFK Residence, the Old State House and more than 20 other sites.

During the ride, the quirky ConDUCKtors spew out historical facts and interesting tidbits. Each guide takes on a different persona, bringing a unique – and often humorous – twist to the tour. There’s Bobby Oar, Vincent Van Duck, Robin the Riveter, Lenient Louis the Plunderless Privateer, Captain Super Swift and a crew of many other characters. 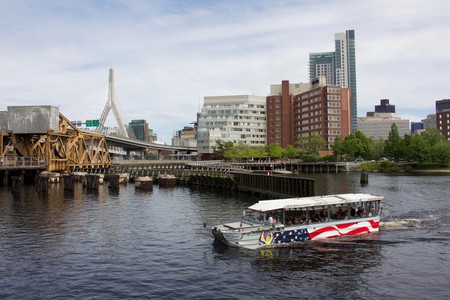 Get on the Charles River

One of the more popular locations along the ride puts visitors right into the Charles. At different points on the trip (depending on your boarding spot), the “Duck” turns from truck to boat, and the drivers take passengers on a 20-minute glide over the river.

Entering the river around the Museum of Science, participants see Boston’s West End and Beacon Hill neighborhoods from the water before cruising under the famous Longfellow Bridge. The excursion gives wide, sweeping views of the Boston and Cambridge skylines and intimately displays the Back Bay, including the beautiful Esplanade, before turning back.

If you’re lucky, you’ll be one of the several passengers picked to drive the boat along the river portion of the tour. 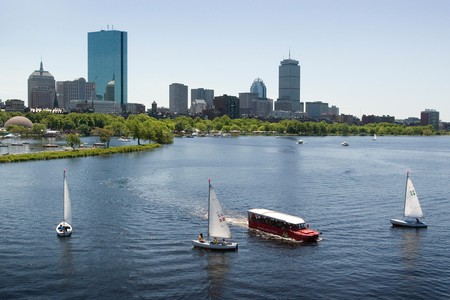 Ride in a little piece of history

While the present-day boats are all replicas, the Boston Duck Tours started with an original fleet of World War II amphibious landing vehicles that were converted for passengers. Code-named “DUKW” (which is where the current name comes from), the last original WWII vehicle was taken out of the fleet in 2014, but the company still owns one for special occasions.

The replicas are known as “truck ducks.” First built in Kansas, these models were purposely made for tourism and have a stronger hull with an enclosed top. The oldest boat dates back to 2006 with the newest being from 2014.

To localize the fleet, the company named each of the 28 duck boats after a Boston landmark or neighborhood, with the name painted along the side of the vehicle. Boats include Back Bay Bertha, Beacon Hilda, Espla Nadia, Olga Ironsides, Symphony Hal, Fenway Fanny and many others. 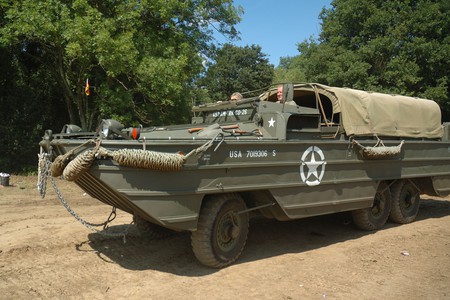 Ride in the same boats as Boston’s champions

Starting in 2002 with the New England Patriots’ first Super Bowl win, Boston Duck Tours and its boats became the “Official ChampionSHIP” of Boston’s four major sports teams. Whenever one of Boston’s teams wins a championship, the company sends out its “Rolling Rally,” a parade that consists of almost the whole fleet and welcomes the players onboard to travel around the city among crowds of cheering fans.

The duck boats have hosted the championship parade a total of 12 times between all four sports teams since 2002, including six times for the Patriots, four times for the Red Sox and one each for the Bruins and Celtics.

On the day of the championship parade, the summer tours are shut down, and all the boats go towards hosting the rally. In the case of the Patriots, whose Super Bowl parade is in the winter, the fleet is brought back into service for one day in February to celebrate. After you’ve experienced Boston Duck Tours, why not check out our list of the must-visit attractions in Boston. 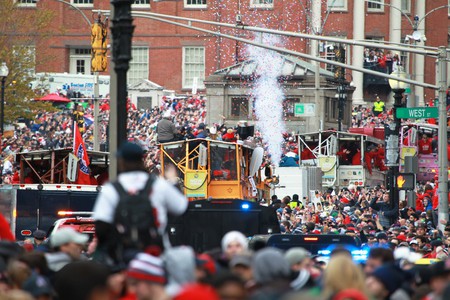