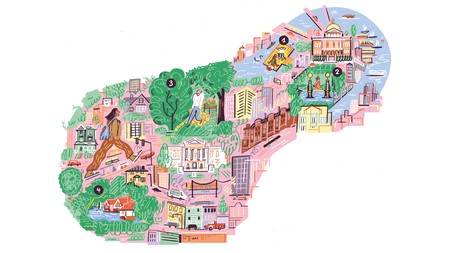 Boston goes by many names: the Cradle of Liberty, the Athens of America, and Culture Trip’s favourite, Beantown. It is also home to the Emerald Necklace, which is the name given to the loose collection of lush green spaces that pepper the city. Culture Trip gives you the tour.

A pale-pink-and-white magnolia the size of a fist detaches from a branch on Commonwealth Avenue, separated from hundreds of others by a spring breeze, its petals scattering along the brick walkway below; in five months’ time, the same pavement will be covered in blazing orange and red leaves. In Boston, the seasons change with intensity, like a sudden gasp of air. And that change is made all the more obvious by the sheer number of trees, gardens, paths and connected parks weaving through this old colonial city.

Starting at Boston Common in the centre of Downtown, the Emerald Necklace encompasses a string of nine parks, linked by parkways and waterways, spanning more than 11 kilometres. Whether you’re lazing on the docks along the Charles River Esplanade, wandering the wood-fenced Victory Gardens in the Back Bay Fens or strolling down quiet, overgrown dirt paths towards Jamaica Pond, here’s how to peacefully lose yourself in nature.

1. Boston Public Dock on the Esplanade

The Charles River – with its long park, known as the Esplanade, stretching down its side – is the bloodline of Boston. Locals come to run the trails, bike the pathways, walk over the bridges and launch sailing boats on the water. While there are numerous noteworthy sites along the Esplanade, such as the Hatch Shell outdoor amphitheatre or the Owl’s Nest beer garden, the dock offers a place to lounge like a true Bostonian and take in the best view of it all.

Lagoon Bridge is the pinnacle of Boston Public Garden. Built in the 1860s, the short, white stone bridge over the pond at the centre of the park offers a commanding view of the oldest public garden in the USA. Pause to take in the willows dripping into the water, statues peeking out from the plants and flowers, and the sound of buskers strumming guitars.

It may be best known for its baseball venue, but the Fenway neighbourhood’s true park is the Back Bay Fens. There’s a rose garden, World War II memorial and sports fields, but the Fenway Garden Society’s Victory Gardens – plots of land created to help boost food supplies during WWII – are the park’s most endearing feature. Wind around the narrow alleys to spot neat vegetable rows, flower beds, stone pathways and picturesque benches.

Further down the Emerald Necklace path, past the peaceful Riverway and Olmsted Park, Jamaica Pond is a world away from the city hustle. The vast body of water is ringed by paths running through quieter, wilder woods. The circular trail directly surrounding the edge of the pond is usually busy with runners and pushchairs, but it’s worth it for the Boat House. The quaint edifice dates back to 1913 and from here you can rent boats to take out on the water.