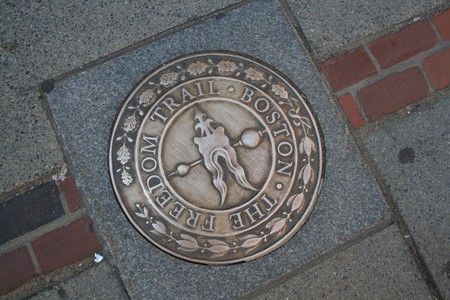 Every Bostonian knows the significance of the Freedom Trail, a path famously marked by red bricks throughout the city that commemorates significant locations of the Revolutionary War. In many parts of Boston, you can’t walk around without crossing the famous red brick line that runs 2.5 miles through the city. There are 16 official sites on the Freedom Trail but, if you’re visiting and don’t have time for a whole tour, be sure to check out these highlights.

This iconic tower is often skipped by tour guides because of its proximity. It’s located in Charleston, across the river from Boston itself, but it’s worth the trek. It commemorates the Battle of Bunker Hill, fought in 1775 in the beginnings of the Revolution. If you climb the 294 steps to the top, you’ll be rewarded with a spectacular cityscape – and a free workout.

While most American students know of Old North Church from the story of Paul Revere’s ‘Midnight Ride,’ not as many think to actually visit the home of the ‘one if by land, and two if by sea’ signal. Still in operation today as an Episcopal church, Old North Church is a time capsule of what Sunday mornings would have been like in the 18th century. It also contains the only sculpture of George Washington in his best likeliness, as quoted by Marquis de Lafayette. 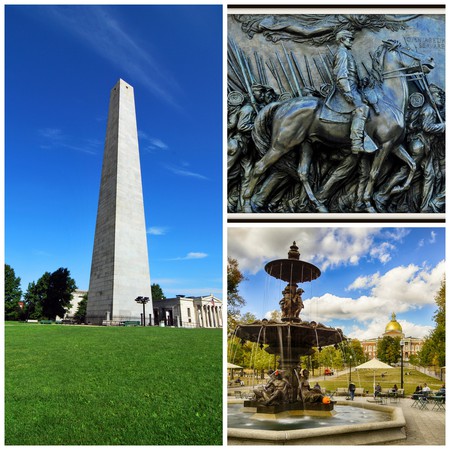 This landmark is by far one of the most important locations of the Revolutionary War. In 1773, this is where colonists met and decided to boldly dump British tea in the harbor, an event that helped spark the Revolution. This nearly 300-year old structure holds many dramatic stories of Boston’s history, and today you can even rent it for special events.

In 1863, President Abraham Lincoln admitted black soldiers into the Union Army. Represented in this memorial is The 54th Regiment of Massachusetts Volunteer Infantry – the first black regiment from the North in the Civil War. Led by white officer Robert Gould Shaw, the regiment is most famous for an attack on Fort Wagner in Charleston, South Carolina, in an effort to capture the city. Shaw and many of his men were killed, and Sergeant William Carney became the first black solider to be awarded the Congressional Medal of Honor. The monument was dedicated in 1897.

Dating back to 1634, the Boston Common is the oldest public park in the country. Its uses have varied drastically – from a field to graze cows to a camp for British redcoats to a celebratory space for fireworks and parades. Today, the Common remains a multipurpose space, used for fireworks on New Year’s Eve, a gathering place for public speaking and protests, and simply just as a place for relaxation. The 44-acre patch now includes a wading pool in the summer, ice skating rink in the winter, ball fields, and plenty of grassy spaces.

As you can tell by now, there are quite a few ‘firsts’ in Boston and Faneuil Hall holds yet another – the first town hall meeting. Because of this, historians often call it ‘the home of free speech’ as it became a vital meeting place for revolutionaries. Originally built for commerce by Peter Faneuil, the hall was where the colonists first protested British legislation like the Sugar and Stamp Acts. In modern times, hundreds of new citizens take their Oath of Allegiance here and it is still used as a public space for debate. Behind Faneuil Hall is the restored Faneuil Hall Marketplace, the most visited site in Boston every year.