Boston Neighborhood Spotlight: Everything To Know About the Back Bay 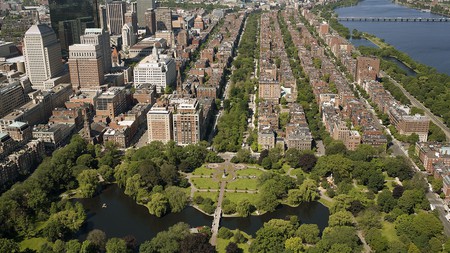 With its brownstones, Boston Marathon finish line, shopping on Newbury Street and waterfront views along the Charles River Esplanade, if you only had one day to get to know Boston, you should probably spend it in the Back Bay.

The Back Bay is home to Boston’s tallest skyscrapers and its glitziest shopping, restaurants and hotels. But if you only stick to the famous commercial strips of Newbury Street and Boylston Street, you’d miss so much of the neighborhood. 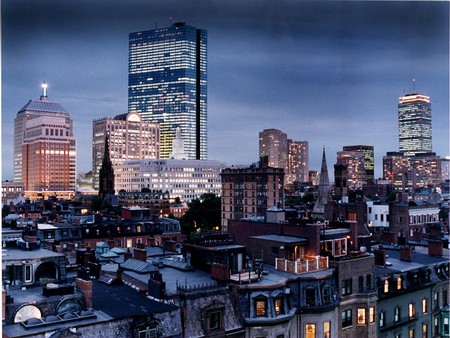 “Back Bay is a great place to just roam,” says Courtney Flynn, manager of Trident Booksellers and Cafe. Flynn encourages people to zigzag their way through the neighborhoods’ parallel avenues to get a true sense of the place. Flynn’s parents opened Trident here on Newbury Street in 1984, so she and her family have witnessed both the things that have changed and the things that have stayed the same.

Unlike the retail on Newbury, Marlborough Street and its parallel neighbors Commonwealth Avenue and Beacon Street haven’t changed a bit. “My favorite place to walk down is Marlborough Street; I like to pretend that I live in one of the single-family brownstones,” says Flynn. She encourages visitors to meander down Commonwealth Avenue Mall, rubbing shoulders with the residents walking their dogs.

If you head in any direction, you’re likely to hit one of the Back Bay’s beautiful parks, from Copley Square (a grassy plaza shrouded by skyscrapers) to the Charles River Esplanade (Boston’s waterfront haven for runners, cyclists, sailors and other outdoorsy types). The access to outdoor spaces together with the beautiful historic buildings make Back Bay one of the most desirable places to live in the city – though it wasn’t always that way. 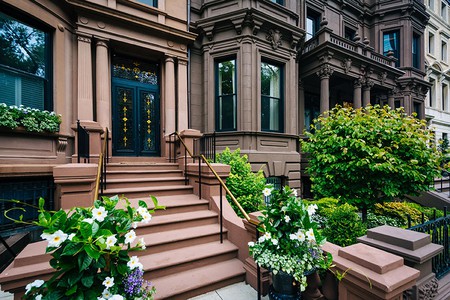 Up until the 1860s, the Back Bay was quite literally that – a bay of the Charles River, and not the gorgeous oceanfront kind. As it was a time before modern plumbing, the marshy bay was strewn with trash and sewage that would be carried down the river at high tide. In order to clean up the smelly area, expand the taxable land in the city and connect Beacon Hill with the Fens, work began to fill in the marshes with earth from surrounding neighborhoods and towns. This project resulted in the beautiful, flat waterfront region that today might be the most quintessential neighborhood in Boston. Wealthy citizens and developers purchased plots and built rows of Victorian and Edwardian brownstones, inviting the city’s most affluent residents to move in.

Flynn partially attributes Trident’s longevity to these local Back Bay residents, but they rely on the entire diverse range of people who filter through the neighborhood every day. “We kind of meet in the middle of the neighborhood. We’ve got regulars who live in the brownstones who come in every day, but we also have students [from Northeastern University, Boston University and Berklee College of Music], as well as tourists discovering the Trident while they’re here.” 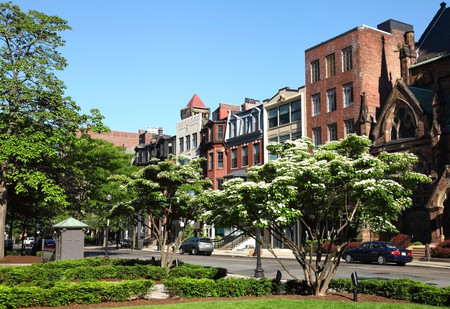 With gardens and shops, Newbury Street and Commonwealth Avenue are some of the most well-traversed paths | © DenisTangneyJr / Getty Images

Where to eat, drink and shop

Shopping is a big draw in this neighborhood, but so is the food. The Back Bay has a huge range of restaurants and bars covering cuisines from New England to Nordic. Saltie Girl serves creative New England seafood with a full range of preparations. Meanwhile, Parish Cafe offers a delicious and high-concept sandwich line-up, with each sandwich created by a different Boston chef, resulting in a menu that reads like a who’s who of the Boston culinary scene. Lolita is a high-end Mexican restaurant with a Gothic-esque, Day of the Dead interior and quirky touches like cotton candy accompanying your check. At the other end of the neighborhood, Chef Chang’s is a cheap and friendly hole in the wall serving authentic and spicy regional Chinese food. If you don’t mind the line (that inevitably runs out the door), Santouka Back Bay always does the trick, especially on a cold night.

Just a block over from Santouka, Trident is one of the last remaining independent shops on the western end of Newbury Street, which Flynn describes as the “hipper, cooler end, whereas the other side [closer to the park] is more high end.” For visitors, she recommends starting the day on the side closer to the Fens and making their way towards Boston Common on the opposite end of the neighborhood. Along the way, check out some of the other boutiques on the shopping strip. Local chain Newbury Comics sells many facets of pop culture, from vinyl records and streetwear apparel to movie memorabilia. Hip Japanese boutique Topdrawer sells design-forward accessories aimed at young travelers.

The route is dotted with charming bars and pubs. The quaint Irish pub The Bebop gained some serious cred when Bruce Springsteen dropped in to have a pint and watch some Berklee students perform one night in 2019. The tiny back patio at Casa Romero serves up killer margaritas, cold Pacificos, and home-made chips and salsa. If you’re feeling high brow, head to the OAK Long Bar + Kitchen inside the Fairmont Copley Plaza for a martini or two. Eataly, the sprawling Italian food superstore, is an experience in and of itself, and it’s hard to beat the patio seating on a sunny day when it rolls out a gelato cart and Aperol spritz bar. 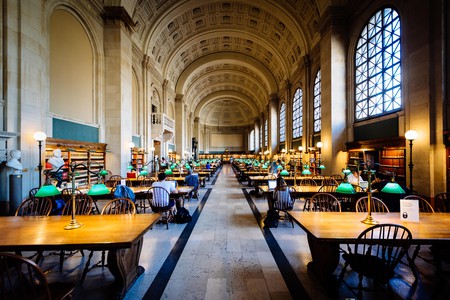 Don’t miss out on Copley

Boylston Street is Newbury’s busy commercial neighbor, and generally speaking, Newbury is more pedestrian-friendly. But it would be a shame to miss the Boston Public Library, especially the courtyard that looks straight out of a European palace. It’s also worth checking out the Boston Marathon finish line and the famous running shop Marathon Sports, where outside you’ll see a memorial to those killed in the 2013 bombings.

You can also spend the afternoon at the Copley Square Farmers Market, where vendors sell fresh produce, candles, soaps and other take-home trinkets. This street also provides access to the Prudential Tower, with an observatory at the top that has sweeping views of the Back Bay and Boston beyond. Among the lines of brownstones, you might be able to spy college students between classes, tourists weaving through shops and Bostonians on their way to brunch.

“Back Bay is so many things, but really it’s so Boston,” reflects Flynn.

Newbury Comics is all about pop culture, selling vinyl, clothing, gifts and, of course, comics.

This Japanese shop is like a high-end tool kit. You can peruse this sleek and understated (and environmentally friendly) establishment for premium bags, notebooks, eyewear and other gadgets. 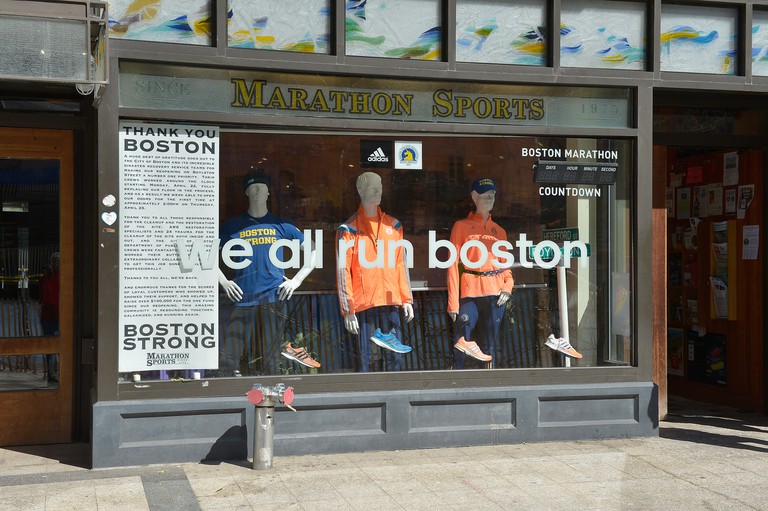 Marathon Sports lies in the heart of Copley Square | © Paul Marotta / Getty Images
Boston is a city for runners, and this shop is like a shrine for running. Located a few steps away from the Boston Marathon finish line, this Marathon Sports (it’s part of a chain that dates back to 1975) has seen many triumphs since it opened in 2001. 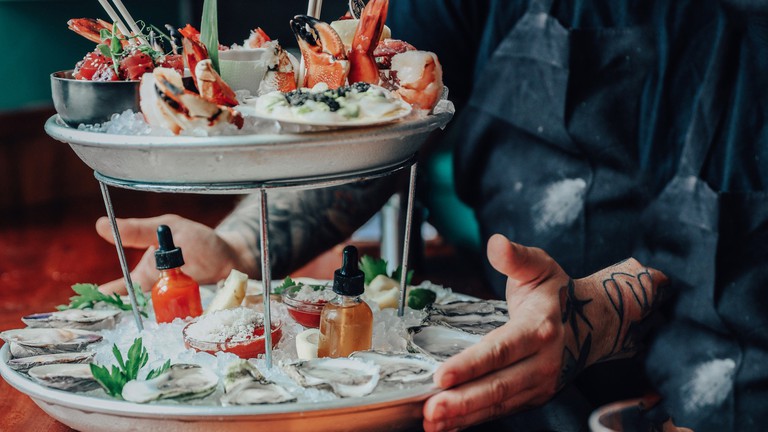 Saltie Girl offers some of the best seafood in town. The trendy restaurant lies inside a brownstone and seats fill up quickly, so be sure to make reservations.

If you didn’t realize sandwiches could be fancy, come to Parish Cafe, where you’ll be blown away by innovative combinations crafted by top chefs in the area. Some involve applewood-smoked bacon, cranberry-chipotle sauce, tomato-caper relish and tarragon-mustard aioli, to name a few.

This hole-in-the-wall Chinese spot offers all the flavorful noodles, dumplings, fried rice and bok choy dishes you could want. 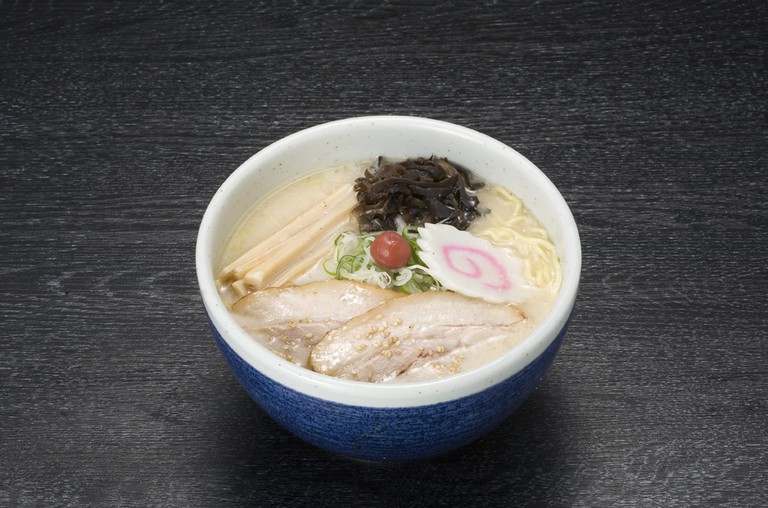 The ramen experts at Santouka have perfected this warm soup. Try its specialty, the tonkotsu shio ramen.

Suitably named after the famous jazz style, The Bebop is an Irish pub and live-music venue specializing in local music. And since it’s positioned within the territory of the Berklee College of Music, it offers quality performances.

In addition to excellent classic Mexican fare, Casa Romero serves margaritas, mezcals, cocktails and beer. Enjoy your favorite concoctions in its adorably decked out back patio. 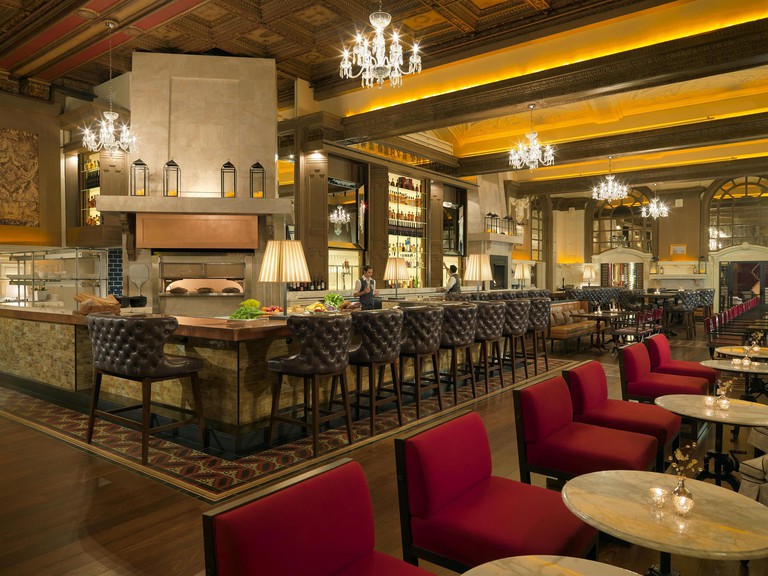 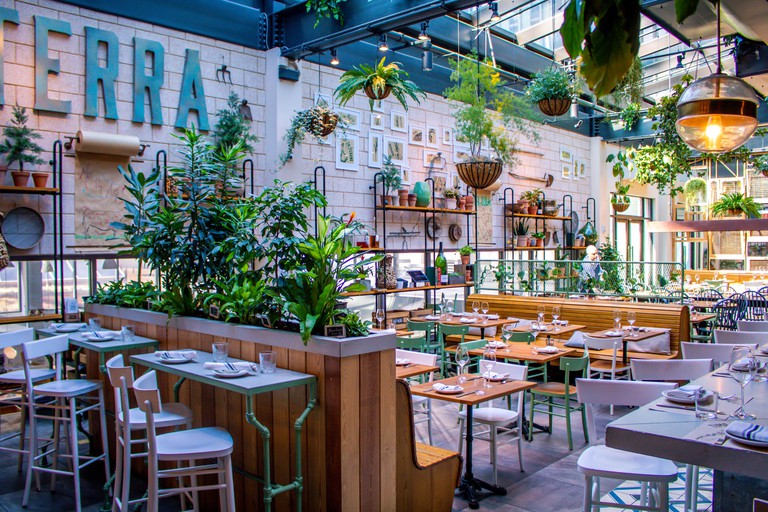 Eataly is all about Italian food and ingredients | Courtesy of Eataly

This indoor market hosts numerous booths and counters displaying the best Italian offerings, from pasta and pesto to wine and lattes. 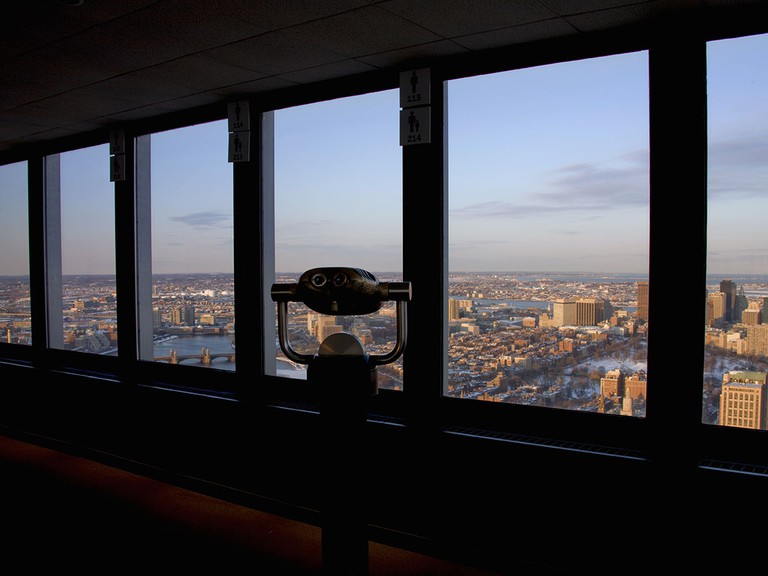 The Skywalk Observatory is 700 feet (213 meters) tall | © altrendo travel / Getty Images
Sit on top of New England with a 360-degree view of Boston and the surrounding area below. Admission comes with a free hand-held audio guide of the sights. 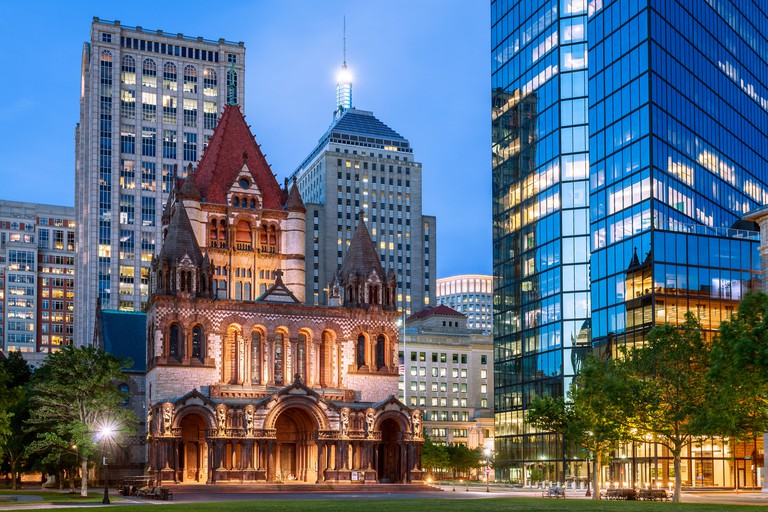 The 19th-century Trinity Episcopal Church lies in Copley Square | © Joe Daniel Price / Getty Images
Home to the Boston Marathon finish line, the first free municipal library in the US and a lively farmer’s market, Copley is a beautiful square to explore. 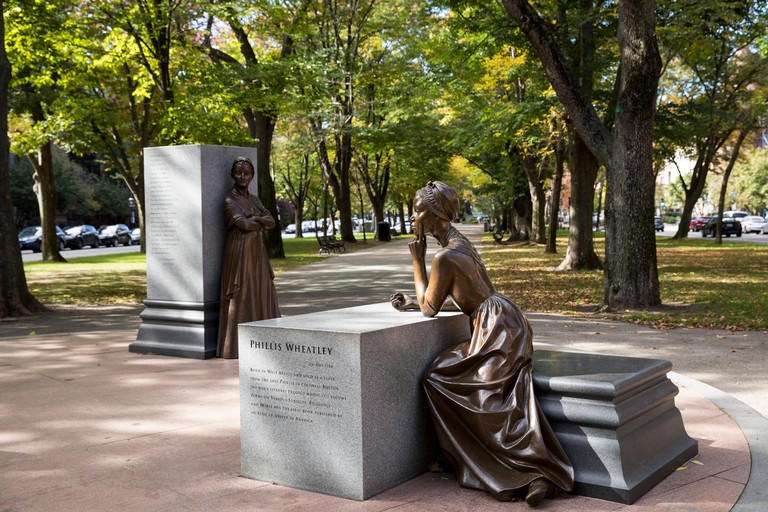 The Commonwealth Avenue Mall has many statues and memorials, including the Boston Women’s Memorial | © Tim Graham / Alamy Stock Photo

Designed by Arthur Gilman, the Commonwealth Avenue Mall is a lush greenway dotted with large trees, statues and memorials. With the Public Garden at one end and Kenmore Square at the other, it is popular with tourists and residents alike.