Boston Neighborhood Spotlight: Everything To Know About Jamaica Plain 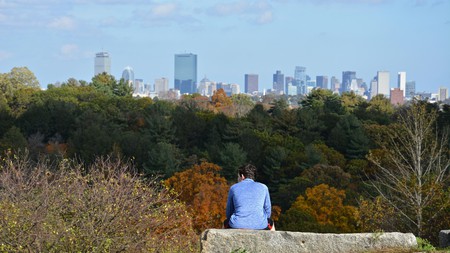 Nestled between Brookline and Roxbury, Jamaica Plain is a dense and lively residential neighborhood with an artistic community, diverse residents, a slew of local independent shops and a neighborly atmosphere that welcomes visitors. Culture Trip details the creative vibe of the area, including some of the best places to eat, drink, shops and socialize.

Friendly and frisky, artsy and eclectic, JP (as residents call it) charms with its mix of Victorian architecture, lush parks and vibrant clusters of independent shops and restaurants. While the neighborhood has grown expensive as more young professionals move in, its residents have made efforts to fend off gentrification (just ask Whole Foods, which faced a bitter public battle when it opened here in 2011), and JP has largely managed to resist being overrun by chain retailers.

With large immigrant and LGBTQ populations, the inclusive ethos of JP has long been defined by a fierce independent streak and a wholehearted embrace of diversity. “There has always been a sense of community and a sort of ragtag excellence that’s endearing,” says Jeremy Kean, a JP resident of 10 years and co-owner and chef at Brassica Kitchen + Cafe on Washington Street. 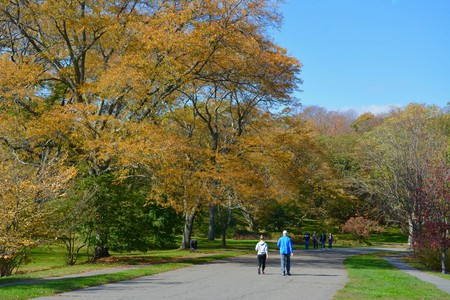 An eclectic and tree-hugging community

You can get a taste of that neighborly atmosphere at JP’s many events and festivals. The jubilant and freewheeling Wake Up the Earth Festival in May – a tradition since 1979 when JP residents defeated a proposal to run a highway through the area – celebrates spring’s arrival with live music and dance performances, artisan vendors, cultural and craft activities for kids, youth theater and a lot of food.

JP is well known for its creative, free-spirited side. “We fell in love with the neighborhood for the green space and the hippies,” says Kean. His restaurant was a natural fit for the neighborhood, he adds, which has, in turn, welcomed their artful vibe and offbeat hospitality. “We are essentially the living room we would entertain in if we all lived together.”

Kim Mitchell, a Jamaica Plain resident and the owner of Boing! Toy Shop on Centre Street, loves the variety of independent and often quirky shops and restaurants outside her doorstep. When friends or family visit, she says, “I love grabbing coffee or a sandwich from City Feed, and dinner at Vee Vee, Brassica Kitchen or JP Seafood, to name a few.” 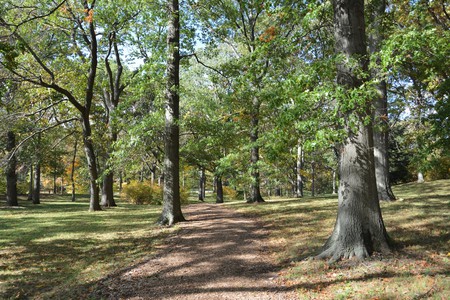 Jamaica Plain also offers a lot of breathing room when you need a break from the activities and local shops along its thriving, walkable commercial strip. The neighborhood is home to a number of jewels in Boston’s Emerald Necklace, a string of parks encircling the city like a rambling wreath, designed by famed landscape architect Frederick Law Olmsted. This abundant green space is another thing Mitchell loves about her neighborhood. “It’s rare to find this much open space in an urban setting,” she says.

Olmsted Park and Jamaica Pond mark the west side of the neighborhood, the latter a glacial kettle pond surrounded by a 1.5-mile (2.4-kilometer) trail and dotted with small boats in good weather. Above the Orange Line subway that runs through the spine of JP is the Southwest Corridor, which offers a bike path to Downtown Boston punctuated with pocket parks and playgrounds. Towards the southeast is Olmsted’s epic 485-acre (196-hectare) Franklin Park, which hosts a zoo and the nation’s second-oldest 18-hole public golf course. And in the southwestern corner, the 281-acre (114ha) Arnold Arboretum of Harvard University is both a meticulously cultivated research institution and one of Boston’s most beautiful parks for a stroll. 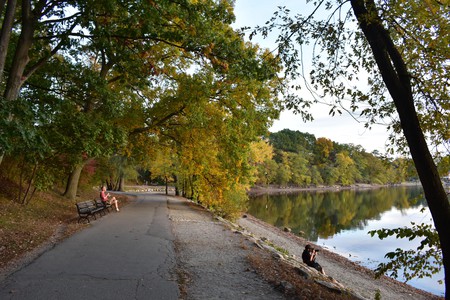 Whether running or relaxing, there are always locals around Jamaica Pond | © Scaff / Alamy Stock Photo

Meanwhile, with so many parks and playgrounds nearby, and some of the best Airbnb rentals in Boston, JP makes for a family-friendly home base if you’re visiting the city with kids. Parking is easier than in Downtown Boston, but the Orange Line subway is always nearby if you want to ditch the car. “JP has always been very kid-friendly,” Mitchell says. “Most restaurants are welcoming to kids, so overall it’s a fantastic place to visit with the whole family.”

Mitchell’s favorite family-friendly restaurant is Bella Luna and the Milky Way, especially during the summer when the patio is open, she says. “But no visit is really complete without a visit to the Arboretum and ice cream at JP Licks,” she adds.

Founded in 1981, JP Licks is perhaps the king of frozen treats in an ice-cream-obsessed city, with 16 locations around greater Boston. The original serves up more than two dozen flavors of ice cream and hard frozen yogurt (including gluten- and dairy-free options) on Centre Street. 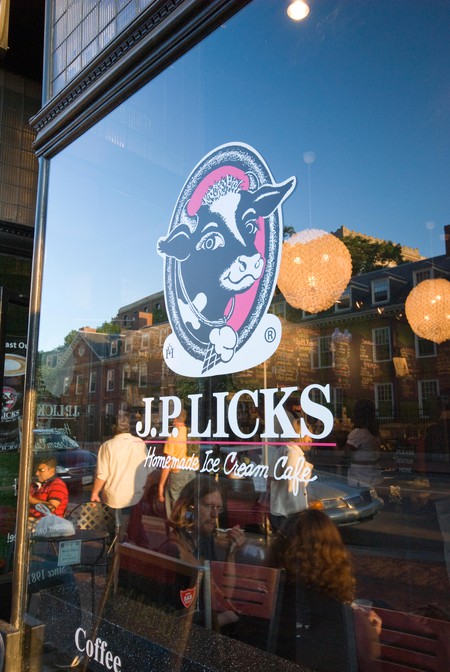 Other local institutions and hotspots include the Brendan Behan Pub, a well-worn and dog-friendly Irish pub in Hyde Square with a rollicking traditional Irish music session on Saturday evenings and a perfect pour of Guinness. It’s cash only, and there’s no kitchen. However, you can order delivery or bring takeout from nearby restaurants – try a Cuban sandwich and a side of plantains from El Oriental de Cuba or The Old Havana, both across the street.

Around the corner, The Haven is a superb Scottish pub serving elevated fare in a cozy setting, while the sumptuously decorated Frogmore dishes out Southern staples inspired by South Carolina’s Lowcountry, including shrimp and grits, and braised short ribs. The homey Tres Gatos on Centre Street combines all the good things – an intimate wine and tapas bar with occasional live music and a small store selling books and records in the back. And the Galway House is a beloved, no-frills tavern with affordable drinks and an extensive seafood menu.

Over on Washington Street, the Midway Cafe is a loveable dive bar and music venue that hosts a steady line-up of concerts and theme nights, including its long-running Queeraoke night on Thursdays. Across from the Forest Hills T stop, Brassica Kitchen + Cafe serves a busy brunch and more mellow, inventive dinner menu. And up the road near Stony Brook station, you’ll find the main (and very good) reason most tourists end up in Jamaica Plain: the Samuel Adams Brewery, which offers tours and samples of new and experimental brews from one of the pioneers of the craft beer movement.

Just be careful not to have too much fun, or like so many Bostonians who have discovered the quirky charms of JP, you may want to stay forever. 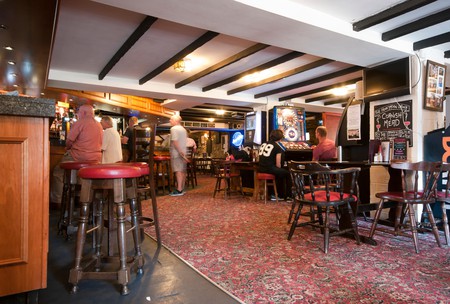 Founded in 1981, JP Licks is perhaps the king of frozen treats in Boston. The original location on Jamaica Plain’s Centre Street serves a wide variety of ice cream and frozen yogurt (including gluten- and dairy-free options), coffee and other goodies.

Bar, Pub, Beer
Facebook
Email
Twitter
Pinterest
Copy link
Share
Map View
This well-worn, dog-friendly and cash-only Irish pub in Hyde Square has traditional Irish music sessions on Saturday evenings. Friendly bartenders pour a perfect pint of Guinness, but there are about two dozen other taps to tempt you. While there’s no kitchen, you can order delivery or bring takeout from nearby restaurants.
Open In Google Maps
378 Centre Street, Jamaica Plain, Boston, Massachusetts, 2130, USA
+16175225386
Visit Website
Give us feedback

This superb Scottish pub serves elevated fare – and, naturally, an impressive selection of whisky – in a cozy setting.

Bella Luna and the Milky Way

This hip, family-friendly restaurant serves up inventive entrées and wood-fired pizza (plus a great kids’ menu and Nutella calzone) in an artistic, exposed-brick setting with regular live music. The location – across the street from the Sam Adams Brewery – is a plus, too.

This artful spot across from the Forest Hills T station has a homey living-room feel. The restaurant transforms from day to night with more casual offerings early and a cutting-edge dining experience later. Pop in for the bright and busy brunch (where the crispy chicken sandwich is the rage) or something from the inventive dinner menu to elevate your evening. 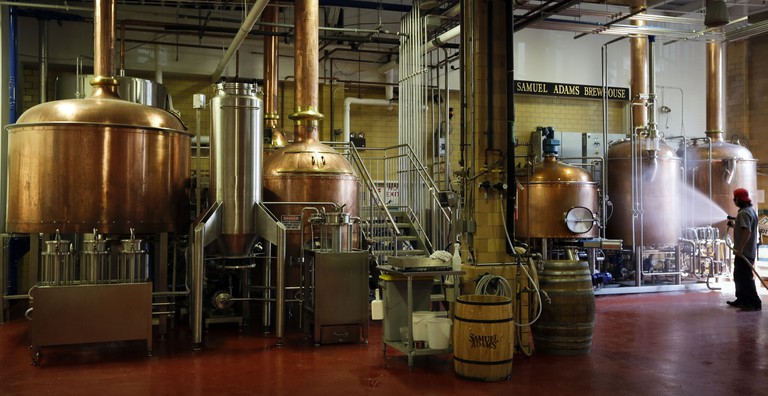 The Sam Adams brewery offers tours and tastings in a lovely setting | Courtesy of Samuel Adams Boston Brewery
Despite its international reach, Sam Adams is still a small, independent brewer, and its original Jamaica Plain brewery, which opened in 1988, remains the birthplace for all of its new recipes and styles. While there are various brewery tours available (except on Sundays), you can visit its Tap Room to sample experimental small-batch beers.
Open In Google Maps
30 Germania Street, Jamaica Plain, Boston, Massachusetts, 2130, USA
+16173685080
Visit Website
Give us feedback

The Midway Cafe is a friendly dive bar and music venue that hosts a variety of concerts and theme nights.

With the motto “To actively promote and support the philosophy that good play helps build good minds,” Boing! Toy Shop is the perfect pit stop for families. In addition to fostering young minds, the shop proclaims a commitment to encourage diversity and equality. 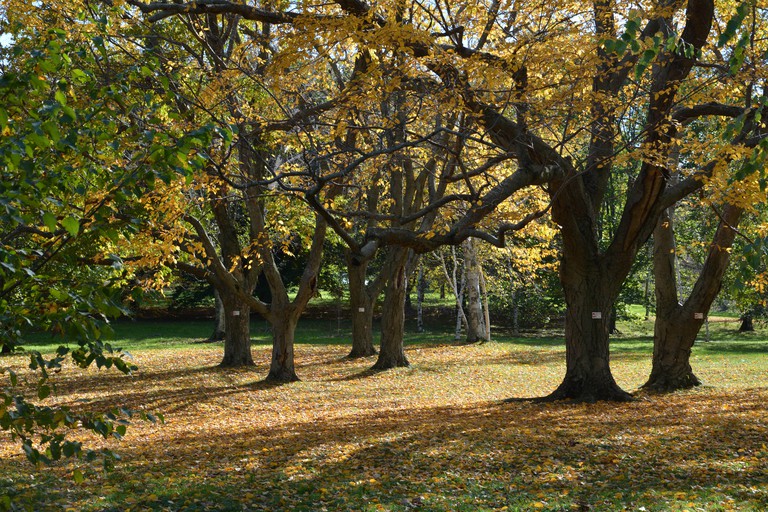 Jamaica Pond is a part of Boston’s Emerald Necklace. It features lots of green space, a 1.5-mile (2.4-kilometer) running path plus a longer, 6mi (9.6km) loop running south along the Arborway stretching to the Arnold Arboretum, which has some of the most scenic foliage in the city and is less crowded than other areas.