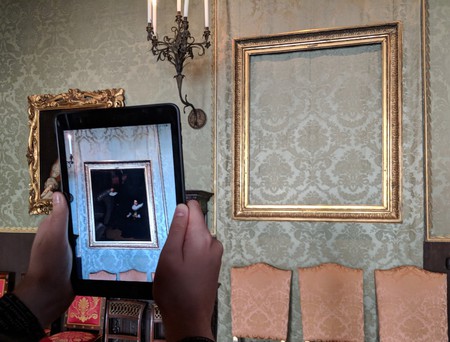 Long-lost masterpieces stolen in 1990 have been returned to Boston’s Isabella Stewart Gardner Museum—if only in augmented reality (AR).

For the 28th anniversary of America’s most infamous art heist, Boston-based tech company Cuseum has unveiled a new AR app that allows users to see stolen paintings virtually restored by holding their phones up to the empty frames. The app, called “Hacking the Heist,” is currently the only way to view the paintings as they were once displayed in the space. 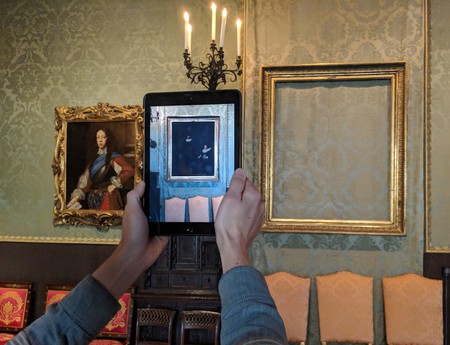 Nearly 30 years ago on March 18, two men dressed as police offers entered the museum under the cover of darkness, tied up the security guards on duty, and successfully cut 11 paintings from their frames—stealing a total of 13 works by masterly artists including Johannes Vermeer, Edgar Degas, Rembrandt van Rijn, and Edouard Manet. The Isabella Stewart Gardner heist resulted in a $500 million loss for the institution and a priceless loss for the public. Not a single artwork has since been recovered.

“We realized that many visitors to the museum either had no idea about the heist or didn’t know what the looted works looked like,” explained the “technologists and lovers of culture” behind the app. “We asked ourselves: how could we help visitors see what is no longer there? Using AR, supercharged by Apple’s ARKit, we were able to make this a reality.”

After extensive on-site testing, the nine Cuseum masterminds behind “Hacking the Heist” garnered public attention for the rare gift their technology would offer: the opportunity to see lost artworks as they were once exhibited. Still in its early days, “Hacking the Heist” only allows users to see Rembrandt’s Christ in the Storm on the Sea of Galilee and A Lady and Gentleman in Black, but more stolen artworks—among them Vermeer’s The Concert, Rembrandt’s Portrait of the Artist as a Young Man, and Degas’s Study for the Programme—may appear soon.

“We hope that people experience new connections with the works that once hung in those empty frames,” Cuseum CEO Brendan Ciecko told Culture Trip. “Visit after visit, we realized that many people had no idea a heist had taken place, or even if they did, they didn’t know what the stolen masterpieces looked like. In addition to reminding visitors how amazing museums like the Gardner are, we hope that this project inspires people to think about how technology can be used to access knowledge and culture in new ways.”

While the project was an independent one and not a formal collaboration between Cuseum and the Gardner Museum, Ciecko hopes that “Hacking the Heist” will elevate visitors’ experience of the Gardner Museum, and demonstrate the expansive bandwidth of AR technology.

“Technology, just like art, can give us a lens into a world that doesn’t exist and expose us to concepts that broaden our minds,” Ciecko said. “My team and I spend a lot time thinking about how art and technology intersect and how the lines between physical and digital are becoming increasingly blurred. We’ve visited the [Isabella Stewart Gardner] museum together…and have always found this place to be inspiring for a wide range of reasons. Mrs. Gardner herself was quite the pioneer and visionary for her time, and the collection there is unbelievable.”

In December 2017, the Isabella Stewart Gardner Museum posted a $10 million reward “for information leading directly to the recovery of all 13 works in good condition,” according to the museum’s website. “A separate reward of $100,000 is being offered for the return of the Napoleonic eagle finial.”