A Spotlight on Brookline: Why You Should Visit Boston’s Sister Town 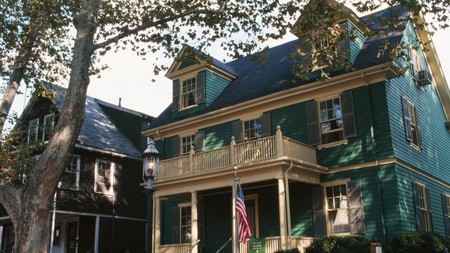 Brookline is a small town surrounded on almost all sides by Boston, practically plopped within the city and thus feeling like a natural part of Beantown. Simultaneously separate from and part of Boston, it’s somewhere visitors should (and probably unknowingly will) go when visiting the Massachusetts capital. 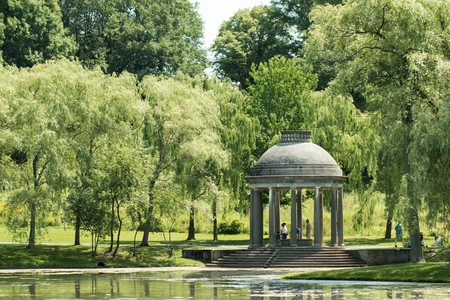 Sandwiched between six of Boston’s neighborhoods, including Allston-Brighton, Fenway and Jamaica Plain, Brookline offers quintessential New England suburban living paired with the conveniences and pleasures of city life. Although it’s technically a separate town from Boston, residents consider it part of the city, and it’s almost impossible to visit Beantown without crossing into its beautiful borders at some point. While it can be difficult to distinguish where exactly it begins and Boston ends in some areas, Brookline boasts a unique mix of history, culture and nature that sets it apart from the surrounding city.

Brookline is considered a mature suburb. Main thoroughfares such as Commonwealth Avenue and Beacon Street run through the town, with blocks of shops and restaurants dotting streets lined with homes and two branches of the subway’s Green Line running parallel to those busy roads. Brookline has also had the benefit of years of infrastructure improvements, making the area very walkable. With several well-established business centers, it’s maintained its status as a hub of activity in (but technically out of) Boston.

As the family-centric neighbor of Boston, Brookline residents tend to be older than those in neighboring Boston by almost 10 years. While Brookline has many residents of Jewish and Asian descent, it isn’t very diverse beyond those groups – there is a fair share of strollers, Sperrys and synagogues. However, Brookline does have a fluctuating college population, which does tend to be more diverse. With Boston College, Boston University and other schools nearby, there’s no shortage of students walking among multistory Victorian mansions with large (by Boston’s urban standards) manicured lawns. 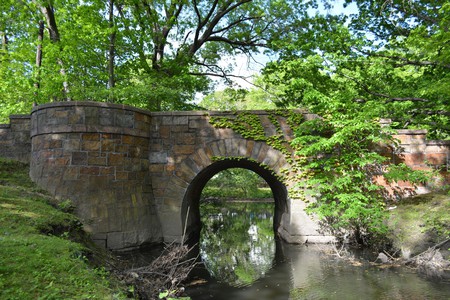 Along the town’s northern border, Brookline abuts the college-centric neighborhood of Allston with its rock clubs and late-night bars, while to the east, it runs along the Fenway and on to Mission Hill. Boasting acres of greenery, Brookline is home to a golf course and the world-famous Larz Anderson Park and is a mere stone’s throw away from Jamaica Pond and the Arnold Arboretum.

Historically, the Algonquin tribe inhabited the area, which was then later colonized by Europeans. Brookline sprouted up as a hamlet of Boston in 1638 (which may explain why it feels like another Boston neighborhood). Serving as fertile farmland in its early years, Bostonians used the land to raise cattle. When the Boston Post Road – a system of mail delivery routes between Boston and New York – was built in 1670, the area transformed, and Brookline Village became a vibrant hub of activity and the area’s first economic center.

Over the next century, sprawling fields were converted and divided into residential developments as some of Boston’s movers and shakers staked a claim just outside the city. The land was named Brookline in 1705, in honor of the two rivers that ran along its northern and southern borders, and was incorporated as an independent town.

By the late 1860s, Brookline had become an attractive location for the wealthy Bostonian elite. After a wave of annexations from 1868 to 1873 (Roxbury, Dorchester, Charlestown, Brighton and West Roxbury all joined Boston), the capital set its eyes on its wealthy neighbor. But in October 1873, Brookline’s residents bucked the annexation trend and voted to keep the town independent.

At a little more than six square miles (15.5 square kilometers), Brookline today stands as one of the biggest towns in New England, containing more than a dozen historically significant neighborhoods. It also consistently tops ‘Best Places to Live’ lists. To help you sort through the culturally rich, idyllic villages of Brookline, Culture Trip has created a guide to the charming area.

The original center of retail in Brookline, Brookline Village (situated at the end of Harvard Avenue and the corner of Route 9) still serves as a busy commerce sector, but the area has been in flux for the past few years. After the community lost a few long-time restaurants, new food and drink from Orinoco and Magnolia Smokehouse now complement established favorites such as Matt Murphy’s Pub and The Brookline Spa. Additionally, with items like the Spuckie (fennel salami, hot capicola, mortadella, mozzarella and olive-carrot salad on ciabatta), Cutty’s sandwich shop has been a welcome addition to the area, often with a line along Washington Street during lunch hour.

After filling up, there are several points of interest in the area, including the famous Dutch House, record shop Village Vinyl and Hi-Fi, Olmsted Park and greater Boston’s first retail cannabis dispensary. Located inside the guts of an old bank, NETA has been operating the shop for several years but only recently started selling recreational marijuana. If you’re looking to grab a bag, be prepared to wait as it’s the area’s only dispensary (for now). 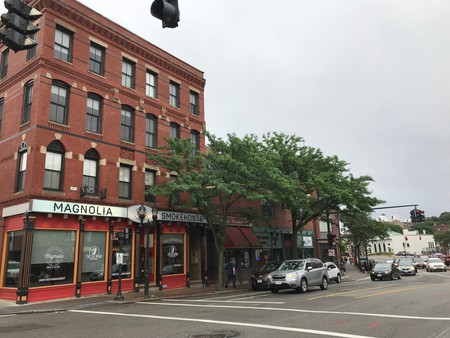 The long-standing hub of shopping, arts and food culture in Brookline, Coolidge Corner remains a must-visit destination for its mix of eclectic restaurants, shops and famous independent theater. With service from the MBTA’s Green Line running through, it also serves as a destination for Boston College and Boston University students traveling on Line B.

Bordering Jamaica Plain, West Roxbury and Roslindale, Brookline’s southern expanse runs off Route 9 and into the area called The Emerald Necklace — a 1,100-acre (4.5-hectare) chain of green space linked by parkways and waterways. Designed by famous architect Frederick Law Olmsted more than 100 years ago, the area includes the Arnold Arboretum, Jamaica Pond and the gorgeous Larz Anderson Park – the former estate of Isabel Weld Perkins and Larz Anderson. The park was left to Brookline in 1948 and serves as the home of one of the nation’s oldest automobile collections. If you’re looking for a respite from the city, each of the area’s parks offers collections of uniquely curated flowers, plants and trees.

With Route 9 running through the area, there’s no shortage of shopping. Directly along the major thoroughfare, you can find The Street, a collection of shops that includes an upscale movie theater, Shake Shack and several retail outlets selling everything from furniture to kids’ clothes. While it’s easier to access this area by car, you can also arrive via the D Green Line, which runs through Chestnut Hill. 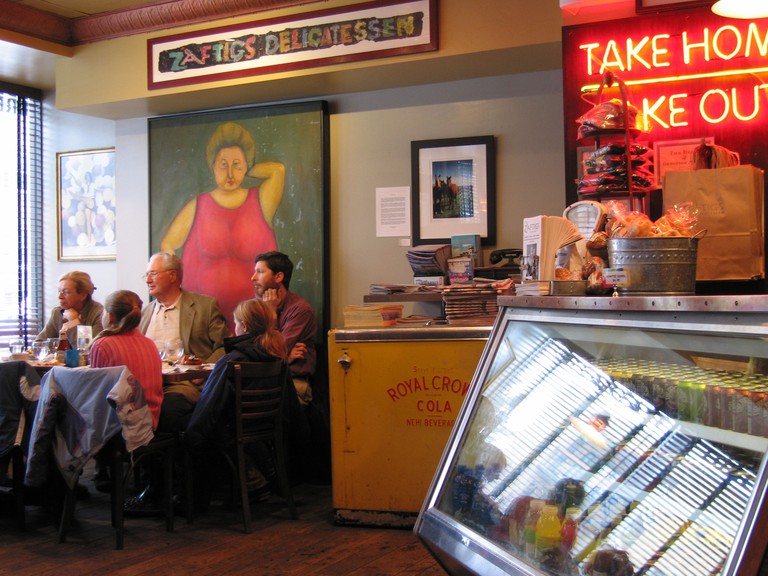 Zaftigs Delicatessen is always packed at brunch, but it’s worth a wait or reservation | © Sarah Hadley / Alamy Stock Photo

As the oldest restaurant in Brookline, Zaftigs Delicatessen still draws a healthy crowd on the weekends, so plan accordingly. Before you can even step inside the dining room, you’ll smell the wafting scent of matza ball soup, pastrami sandwiches and arguably some of the best latkes in town. Famous for its supersize sandwiches, the deli makes everything from an open-faced turkey sandwich to a house-made falafel wrap. 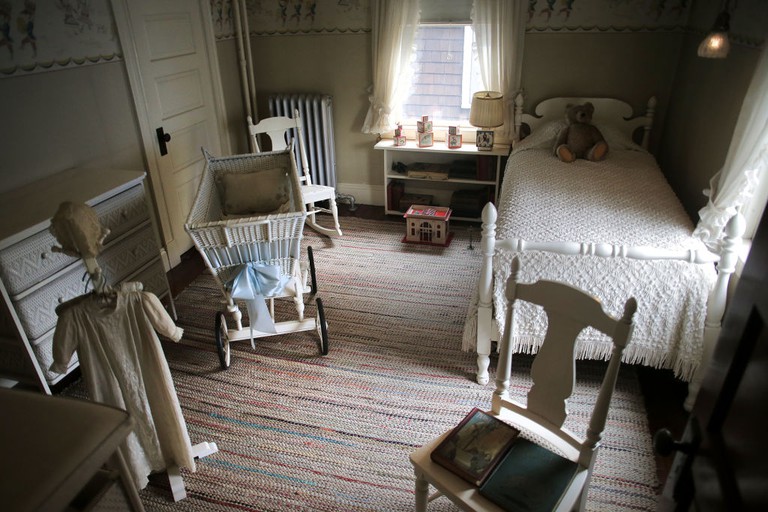 Located just outside of Coolidge Corner, the birthplace of John F Kennedy is now a museum operated by the National Park Service. Inside, you can explore the historic home where JFK learned the values that inspired him to pursue a life in public service. 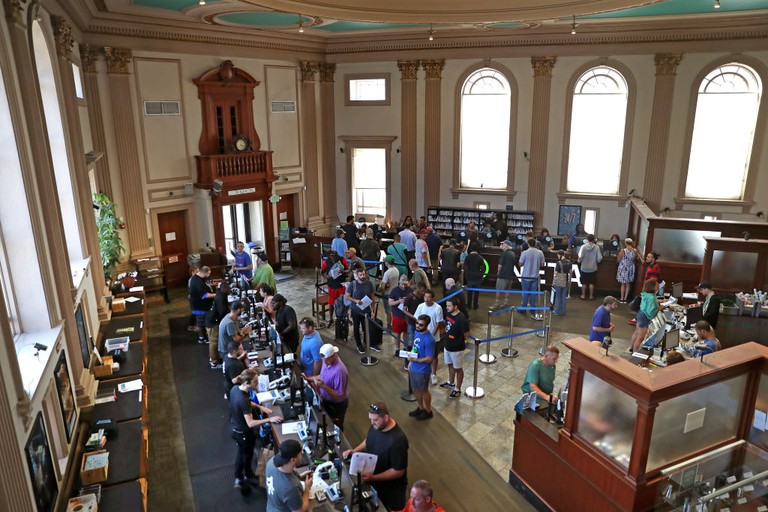 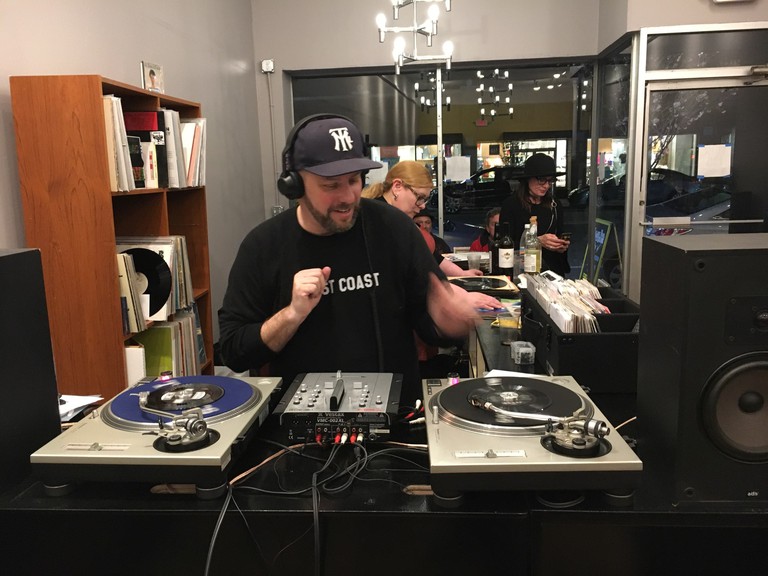 Opened in 2017, Village Vinyl and Hi-Fi is the only place to find used records in Brookline. In 2019, the shop moved to a larger space at 307 Harvard Street, closer to Coolidge Corner. 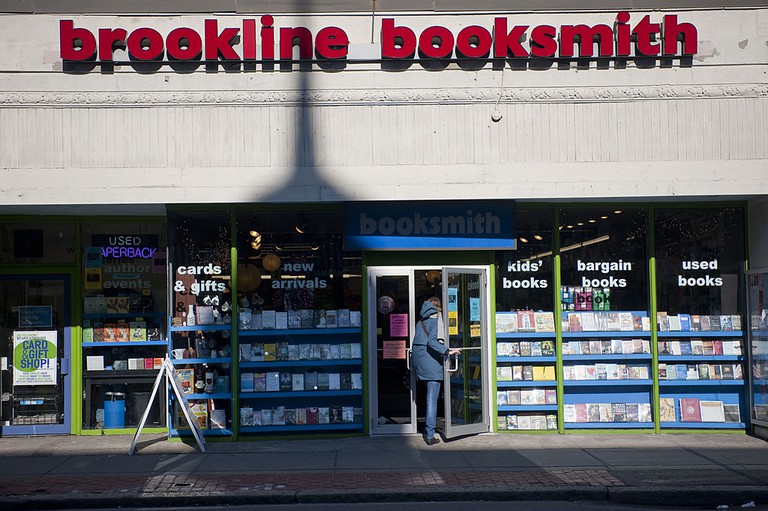 Brookline Booksmith is one of the most charming independent bookstores to wander | © Christian Science Monitor / Getty Images
Part used bookstore and part gift shop, the Brookline Booksmith is the long-standing champion of the Coolidge Corner retail collective. With famous writers and playwrights popping in all the time for signings and readings, there’s always a new reason to visit. Then there are the books. In addition to a sharply curated collection upstairs, the bookstore maintains a massive selection of used material in the basement. 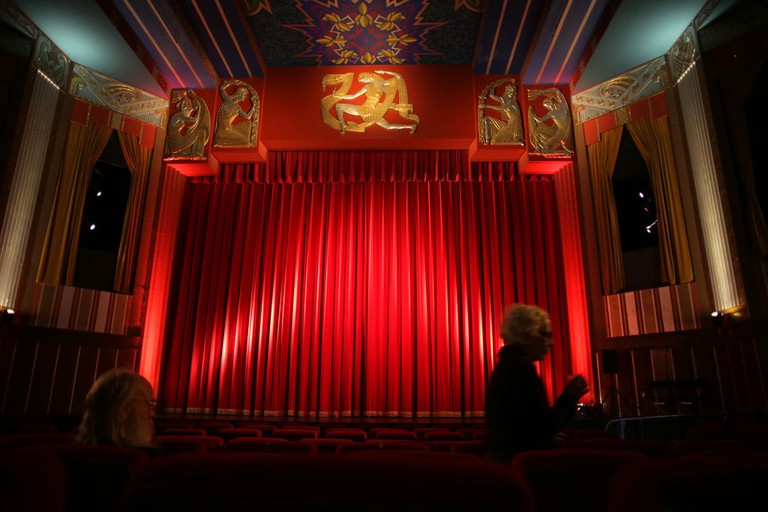 One of the best independent theaters in the greater Boston area, the Coolidge Corner Theatre always features a mix of new and old favorites. It’s where you’ll find that new art film everyone is talking about alongside cult classics like Halloween (1978). The popcorn is tasty, and it also serves beer and wine. 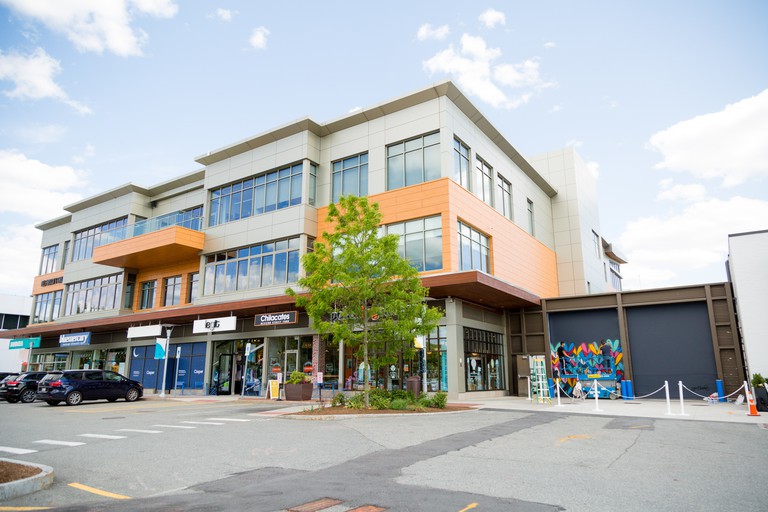 An outdoor mall, The Street boasts popular anchors such as Shake Shack and the area’s only SuperLux movie theatre, but its real draw is the property’s family-friendly programming. Being in Chestnut Hill, The Street also includes unique shopping boutiques, top-tier restaurants and high-end home and life outlets. 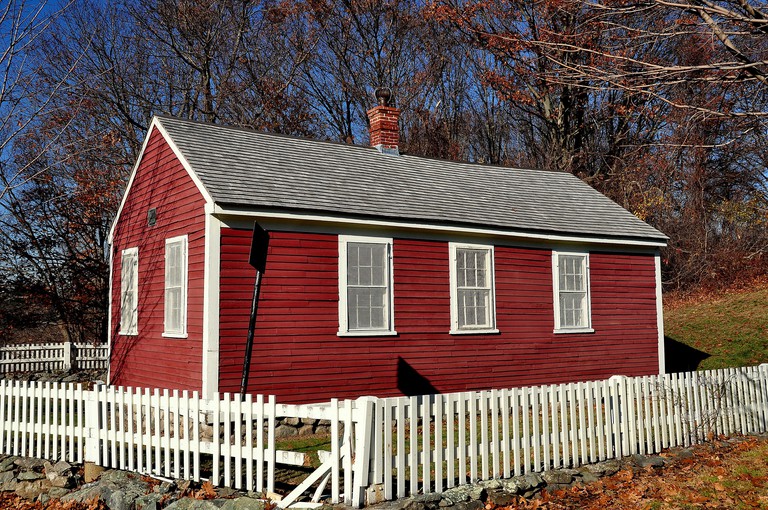 One of the older parts of Boston’s Emerald Necklace, the Larz Anderson Park is Brookline’s largest recreational area and is home to the famous Larz Anderson Auto Museum, which houses one of the nation’s oldest car collections. Listed on the State and National Register of Historic Places, the park is a favorite spot for family picnics, taking pictures or just playing. In the winter, the hills are perfect for sledding, and you can even strap on skates at the nearby outdoor rink.