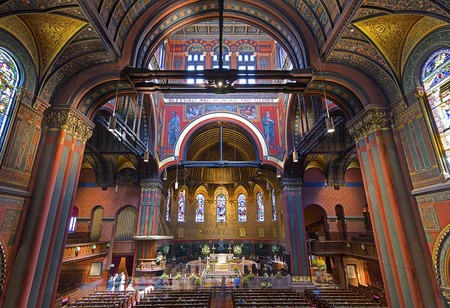 In Boston’s Back Bay at Copley Square sits the architecturally stunning Trinity Church. The Back Bay neighborhood was once underwater before being filled in with land. The church actually rests on over 4,000 wooden piles that were put underneath fill and clay to keep the church’s foundation strong. 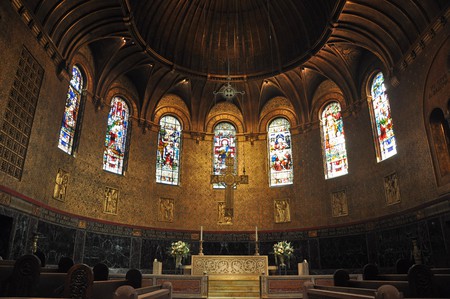 When was the church built?

Built from 1872 to 1877, Trinity Church is part of the Episcopal Diocese of Massachusetts parish. After the parish’s church on Summer Street had burned down in the Great Boston Fire of 1872, construction on the new church began – one in the shape of a modified Greek cross – under the direction of Rector Phillips Brooks, a well-known preacher at the time.

Designed by Henry Hobson Richardson in a Richardsonian Romanesque style, Trinity Church is considered the birthplace of this architectural style, and its signature features include a clay roof, arches, rough stones, and towers. The style has since been used in many other buildings in the United States.

Inside Trinity Church, there are brightly colored murals that cover over 20,000 square feet (nearly 2,000 meters squared). While the windows were clear glass at first, they are now beautiful stained-glass murals. The church is considered one of the “Ten Most Significant Buildings in the United States” and is the only church in the nation with that honor. 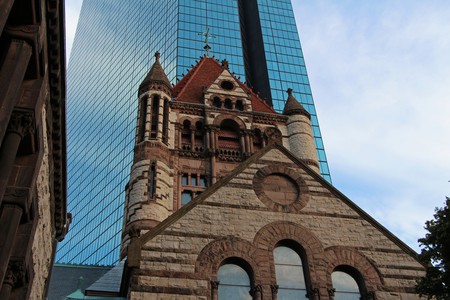 Trinity Church is still operating today, nearly 300 years later. The congregation holds five services on Sunday, as well as a few services during the week, depending on the season.

Additionally, the parish is heavily involved in community outreach and has partnerships with Habitat for Humanity, Rosie’s Place, the Walk for Hunger, and other organizations. Several of their outreach ministries became the Trinity Boston Foundation, a separately incorporated, nonprofit organization that supports the emotional well-being and development of young people – for both the religiously affiliated and those without faith traditions.

The National Historic Landmark building also offers guided or self-guided tours for visitors Tuesday through Sunday (the tour is free on Sundays). Stop by and see the beautiful stained glass and unique architecture!