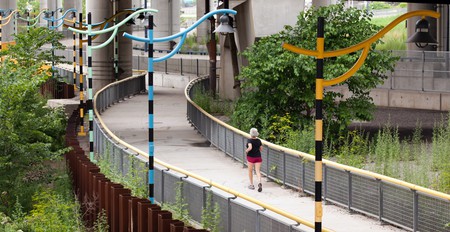 By any measure, Boston is one of the world’s great running cities. Miles of waterfront trails, an abundance of public parks and comfortable running temperatures from April to November make Boston a very approachable place to get out for a jog, or if you’re so inclined, a marathon. These flat, pedestrian friendly four-milers (about six kilometers) are a scenic way to see Boston, from Downtown to its outer neighborhoods.

This four-mile (six-kilometer) loop will take you from Boston to Cambridge and back again while circling the picturesque Charles River. Start at the Charles River Esplanade right by the Massachusetts Avenue Bridge on the Boston side. This beautiful strip of waterfront park is incredibly popular with runners, walkers, cyclists, rollerbladers (yep, still) and even sailors – Boston’s popular Community Boating sailing school is anchored here. Head east towards the Longfellow Bridge, identifiable by its towers that resemble salt shakers, as well as the Red Line subway tracks running through its center. There are a few paths to follow in the Esplanade here, but the rule of thumb is to stay close to the river (and away from the road) for the best views and most serene route. Put your willpower to the test as you pass Night Shift Brewery’s Owl’s Nest beer garden (open from late spring to early fall). Better yet, stop by for a cool-down beer after your run. Off to your right you’ll pass the Hatch Shell, Boston’s iconic outdoor performance space that hosts the annual Boston Pops July 4th performance (as well as other concerts and free outdoor movies throughout the summer months). 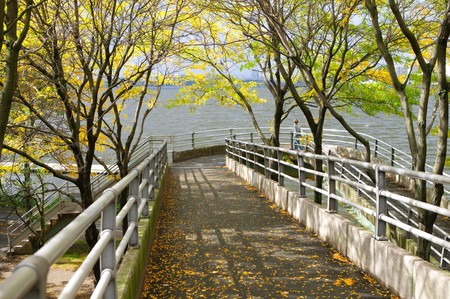 As you approach the historic Longfellow Bridge, look out for the stairway/ramp to the bridge, the safest way to access the pedestrian path over the bridge. Keep on the left-hand side of the bridge as you cross for spectacular views of the Charles River, the Esplanade and Boston’s skyline in the background. Once over the bridge, you’re in Cambridge, Boston’s sister city, known for its universities and its cool bars and restaurants. Once you pass the last of the bridge’s salt shakers, hang a left to get back on the river path (now on the Cambridge side across the river from the Esplanade), looping back in the direction of the Mass Ave Bridge. Along this stretch you’ll get smarter just breathing in the air as you pass MIT’s campus on your right. On your left, you’ll have an uninterrupted view of the Charles River and Boston, as well as Cambridge’s scenic marinas and sailing clubs. Once you reach the Mass Ave Bridge, hang a left and cross back over to Boston, and get ready to cue up ‘Eye of the Tiger’– you’re entering the final half-mile of this route, which also happens to be the final half-mile of the Boston Marathon.

Taking a left onto Commonwealth Avenue, you’ve now entered the home stretch of perhaps the most famous road race in the world. As you take a right onto Hereford Street, imagine the crowds of people cheering you on after 26 miles (42 kilometers) of running. Hang a left onto Boylston Street and you’ve entered the final straightaway – only three more blocks to the finish. As you zoom past Exeter Street, keep a careful eye on the middle of Boylston Street between Exeter and Dartmouth streets, in beautiful Copley Square and steps from the Copley subway stop on the Green Line – there, painted permanently in blue and gold, is the Boston Marathon Finish Line. Nice work, champ!

Start at Sullivan’s snack bar in South Boston, or ‘Southie’ as it’s affectionately known. This fast-food institution serves as the gateway to Castle Island, a charming 22-acre (nine-hectare) park jutting into Boston Harbor. Entering Castle Island park, take the trail up to your left-hand side to begin your run. Off to your left, the Conley Shipping Terminal, stacked with shipping containers and industrial machinery, may seem like an eyesore on this beautiful stretch of coastline. But from the right perspective, the checkerboard of multicolored containers and flanked by blue and white cranes has a modern art vibe, and is worth a photo. On your right-hand side you’ll see the centerpiece of the park, Fort Independence. With roots dating back to the 17th century, this former military fortress was used as a military outpost throughout America’s wars and conflicts up through World War II, and is now a museum. Unless you’re a military history buff, it’s more interesting as a scenic backdrop than a tourist site in its own right. Stay left along the ocean as you run through the park. 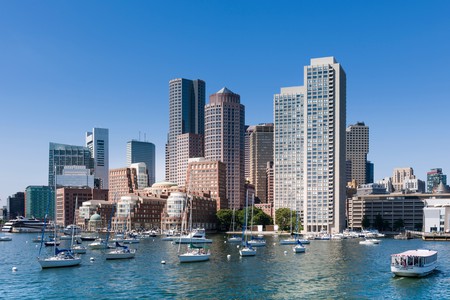 As you round the fort, take a quick detour out to the stilted fishing pier just off the walking path. Most days it will be dotted with fishers trying to reel in some cod for dinner. These anglers are almost always approachable and willing to let you take a look at their catch or tell you about the day’s conditions. Now on the far side of the fort, instead of looping back to where you started, head straight out on the thin spit of land called the Head Island Causeway, part of Boston’s Harborwalk. You’ll see some of the Boston Harbor Islands off to your immediate left, but after that it’s open ocean. From here on out, you’ll follow the coastline for about 2.5 miles (four kilometers), past South Boston’s beaches, which cater to a mix of local families and college grads during the summer months. Once the sandy beaches end, you’ve entered Dorchester, Boston’s largest neighborhood – more than 20% of Boston’s population lives here. The neighborhood’s main drags are worth a visit especially when hungry, as you can get just about any type of authentic cuisine here due to the neighborhood’s size and mix of long-timers and immigrant communities.

Finish your run as you approach the modern black and white blocks of the JFK Library, near the Red Line of the T. 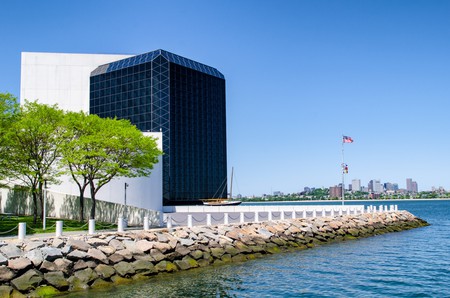 Side note: While famous in its own right, the JFK Library is still one of Boston’s most underrated museums, likely due to its location outside of the major tourist zone. The building itself, whether it’s your style or not, offers a thoughtful counterpoint to the traditionalism of Boston’s red-brick architecture. In fact, Jackie Kennedy hand selected the then relatively unknown architect IM Pei to design the building. Inside (and you should go in, even if you’ve broken a sweat), the exhibits are varied but consistently fascinating regardless of your level of interest in Kennedy himself.

Start at the Verb Hotel, right across the street from Fenway Park.

This run takes you along the well-maintained trails of Boston’s Emerald Necklace park system. Designed by Frederick Law Olmsted, famed designer of Central Park in New York (and let’s face it, probably the only park designer most people have ever heard of), the string of parks traverses the entire city of Boston. This is a real gift for runners, as there’s minimal traffic and you have a choice of sidewalk or dirt path for much of the route.

From the Verb, head right on Ipswich Street and then left on Boylston and you’ll run smack into the The Back Bay Fens, a park that will serve as your entry point to the Emerald Necklace. From here, follow the green spaces – the Emerald Necklace snakes right through the city. The serene path twists and turns through some community garden plots on the north side of the Fens and then later past Boston’s museum district on the south side, where you’ll pass the regal Isabella Stewart Gardener Museum and Beaux Arts-inspired architecture of the Museum of Fine Arts Boston. After crossing Brookline Avenue and the Riverway, you’ll see a large sign for the Emerald Necklace, so you’ll know you’re going the right way.

In this Riverway stretch, you’ll be running parallel to the T Green Line train tracks. They’re not renowned for their speed, so you could probably beat one of these green trolleys in a foot race to Longwood Station if you’re looking for motivation. Keep in mind that one side of the park has a paved path and the other side is a dirt trail, so choose whichever option is better for your legs. The small river running in between is the dividing line between Boston (to the east) and Brookline, birthplace of some of Boston’s favorite sons, including JFK, RFK and Conan O’Brien – and adoptive home of its sports hero, Tom Brady. Onward past the intersections near the renowned Longwood Medical Area (home to some of the best hospitals in the world) is Olmsted Park. Here, you’ll pass some solitary ponds, geese and other large birds, and some shockingly wild-looking trails hidden beyond the sight of cars. Finally, the green turns to Jamaica Pond, a fairly large body of water surrounded by benches, a boathouse and more people strolling and taking in the views.

End at Jamaica Pond in Boston’s hip and leafy Jamaica Plain neighborhood, where you can eat, stroll the shops or take the Orange Line back to the center of the city. 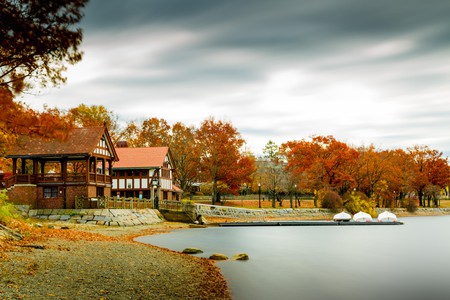