The Best Hotels to Book Near Harvard University 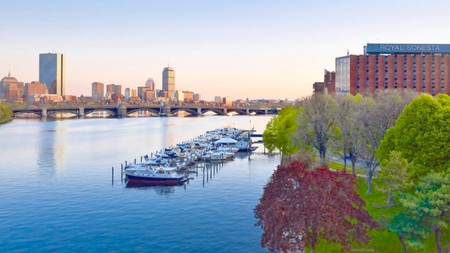 Relax by the river and soak up city skyline views at these hotels near Harvard University | Courtesy of Royal Sonesta / Booking.com

It’s home to America’s most famous educational institution, but Harvard Square knows how to have fun, too. Tapping into Boston’s history, sporting success and art scene, the hotels here and across Cambridge, Massachusetts are anything but stuffy – and they’re bookable with Culture Trip.

The oldest and most revered institution of higher learning in America, Harvard University conjures up images of students in majestic reading rooms with their heads buried in books. The neighborhood where the university is based, Harvard Square, is considerably more lively than that thanks to a fascinating mixture of characters, from political activists to street performers. Hotels here and across Cambridge feed off that energy, drawing on Boston’s storied past, wonderful produce, arts scene and sporting excellence to make your stay near Harvard University both fun and educational. 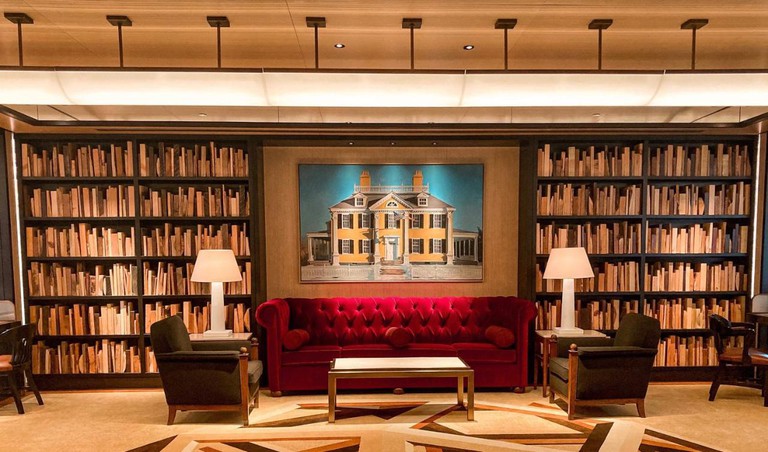 Courtesy of The Charles Hotel / Booking.com
Shaker furniture, plaid carpeting, plush checkered quilts – the Charles Hotel is as New England as it gets. And just in case you forget where you are, there are sweeping views of Harvard Square, the Charles River, Cambridge and Boston when you open a window in your room. As if you need any further New England immersion, the menu at restaurant Henrietta’s Table is a showcase of organic ingredients sourced directly from Massachusetts farms and the local coastline. 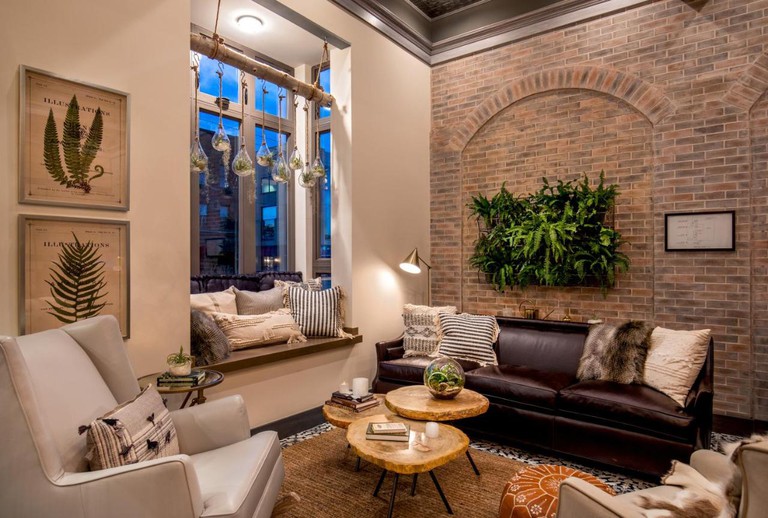 Courtesy of Hotel 1868 / Booking.com
Influenced by the machine age and industrial design period, the 50-room Hotel 1868 is meant to have the look and feel of a renovated mill. Rooms have high ceilings and tall windows, while designers have really followed through with the industrial motif – check out the headboards and cabinets made with iron barn-door hinges. Fittingly, the hotel is on Porter Square, a center for commerce and light industry as far back as the late 18th century. 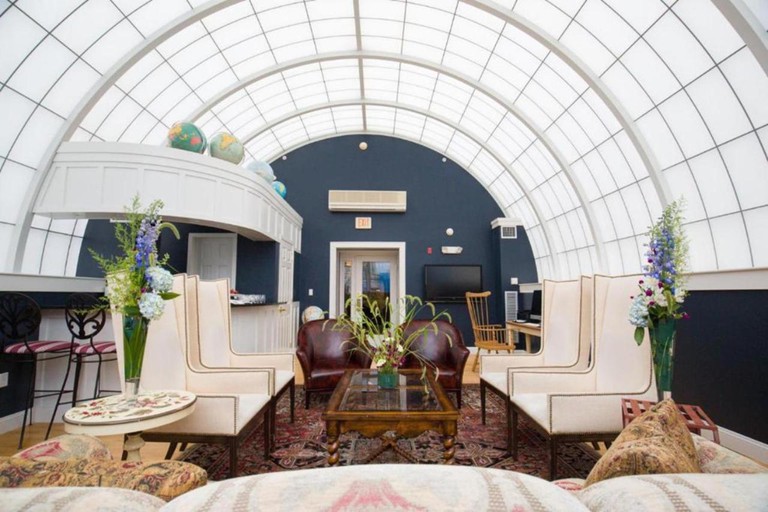 Courtesy of The Kendall Hotel / Booking.com
A collection of firemen’s helmets in a display case and statutes of Dalmatian fire dogs hint at the Kendall Hotel’s past. Completed in 1895, during a time when the neighborhood was a major industrial center, the building was the Engine 7 Firehouse. The firefighting theme extends to meals at the boutique hotel – you can tuck into a fireman-size gourmet breakfast buffet, while the Black Sheep restaurant references the nickname of the Engine 7 firefighters. 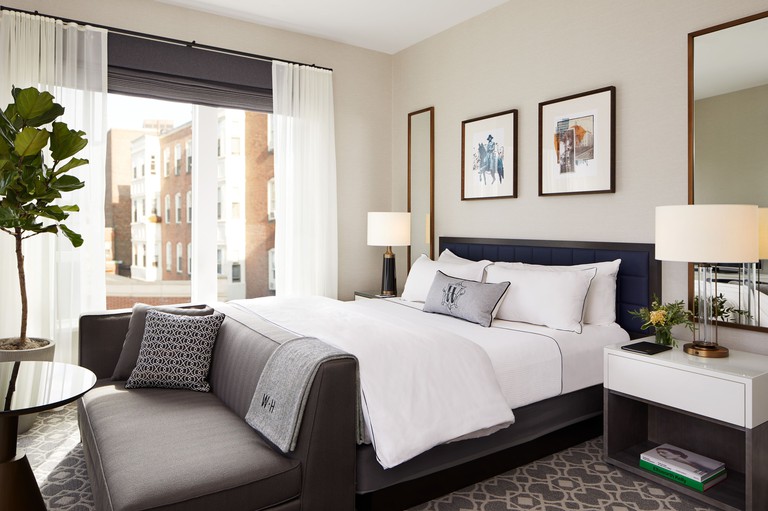 Courtesy The Whitney Hotel / Expedia
Named after Henry Melville Whitney, a prominent Boston industrialist, this 65-room luxury boutique hotel occupies the sort of classic brick building that makes the Beacon Hill neighborhood so sought after. Striking a good balance between uncomplicated luxury and home comforts, the Whitney is all about delivering a bespoke service like a “mommy-to-be” package that includes a spa day and baby gift. 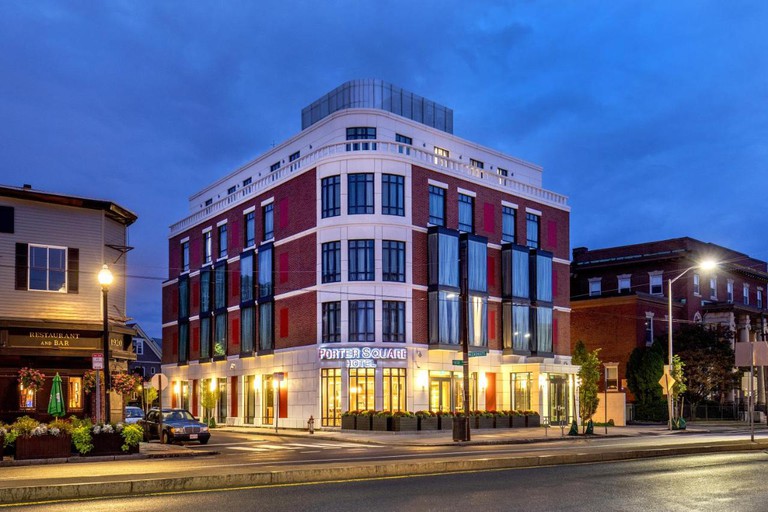 Courtesy of Porter Square Hotel / Booking.com
The modern, 65-bedroom Porter Square Hotel delivers a masterclass in how to best make use of natural light. Thanks to large windows in the bedrooms and glass walls on the landing that look into an atrium, there’s a lovely welcoming glow here during the day. Kimono-style bathrobes in the rooms increase the feeling of zen, as does gazing out from the window of a fifth-floor room and taking in views of the Boston skyline. 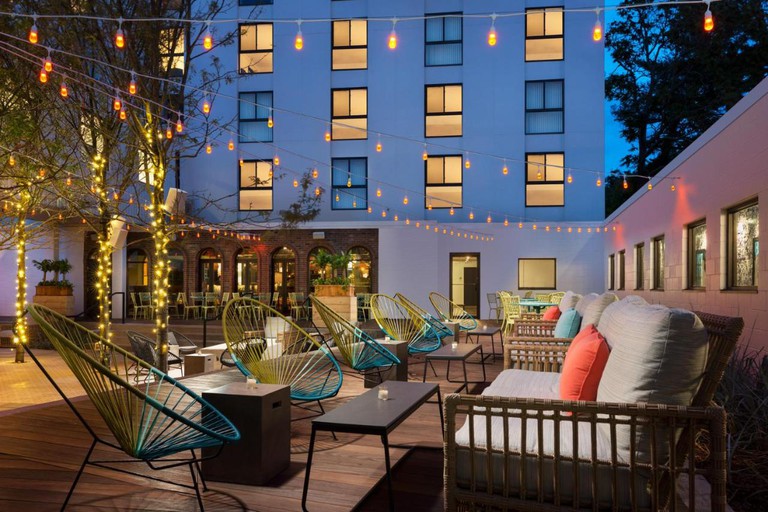 Courtesy of Studio Allston Hotel / Booking.com
This is the closest you can get to sleeping in an art gallery without security dragging you away. Studio Allston has partnered with a number of national and local artists to create its interior, resulting in a unique, kaleidoscopic environment that celebrates the local creative community from a perch in Boston’s edgiest neighborhood. If the decor isn’t enough to get your creative juices flowing, there are also more than 100 pieces of in-room and public-space art to enjoy. 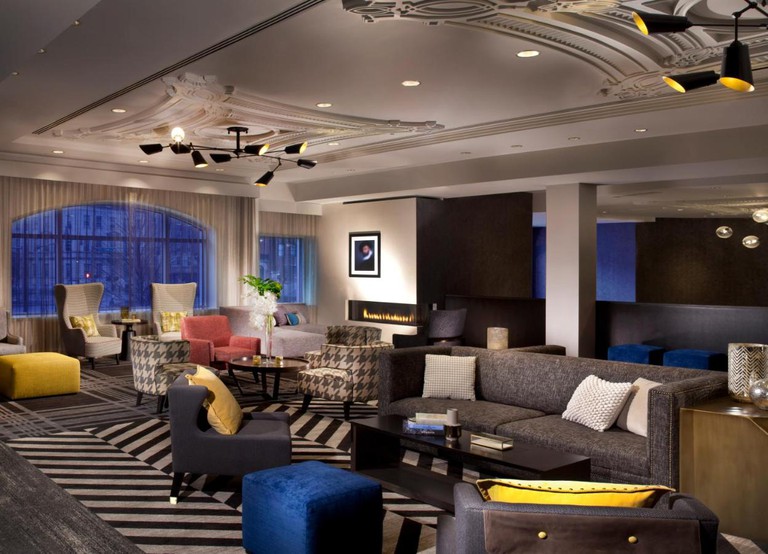 Courtesy of Hotel Commonwealth / Booking.com
Hotel Commonwealth has two must-see sights right on its doorstep – Fenway Park, home of the Boston Red Sox, and the Boston Citgo sign that acts as a backdrop to games. Given its proximity to a sporting cathedral it’s unsurprising that baseball is a common theme in the hotel. The Baseball Suite is accessorized with a collection of trading cards, while the Fenway Suite is so close to the park you can smell the hotdogs – in addition to having a coffee table signed by Red Sox legends and actual Fenway dirt. 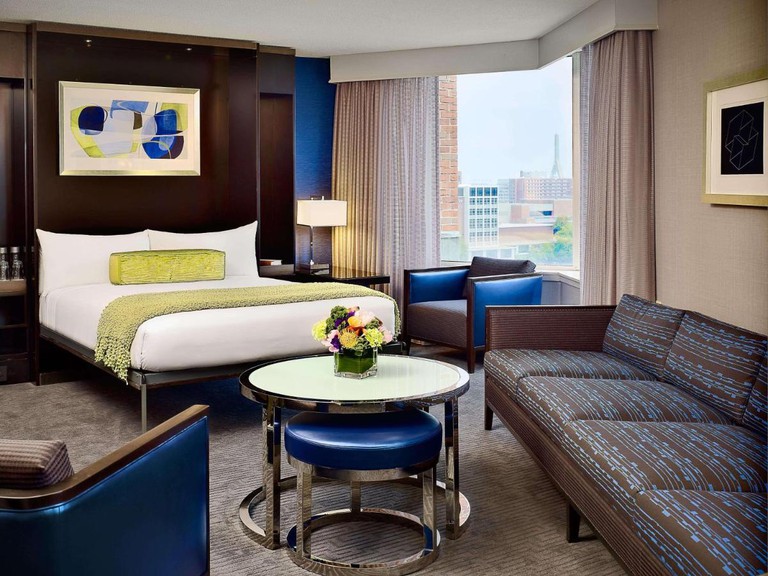 Courtesy of Royal Sonesta / Booking.com
It’s entirely apt that the Royal Sonesta borders Edwin H. Land Boulevard, named after the inventor of the Land Camera. The other side of the hotel runs along the Charles River, a location that offers the sort of uninterrupted views you just need to snap. To really cash in on the waterside setting, head to the Art Bar where you can try the best of New England cuisine, artistic cocktails and a curated wine list surrounded by the hotel’s impressive art collection. 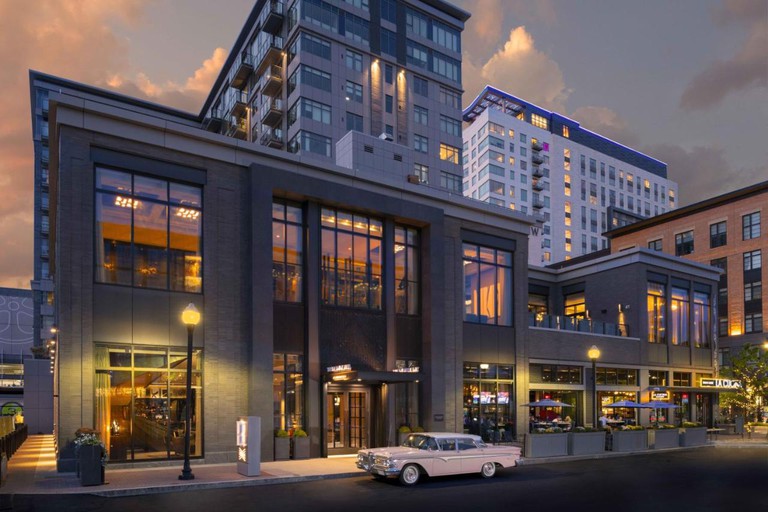 Courtesy of The Row Hotel at Assembly Row, Autograph Collection / Booking.com
Given that it was once used as a Ford Motor Assembly Plant, there is plenty of room to stretch out at the Row Hotel at Assembly Row. Spacious rooms have ergonomic workspaces, a pull-out sofa and come with lovely personal touches like pillow-top mattresses, custom duvets and cotton-rich bathrobes. And the fact that the hotel is pet-friendly means that Fido can stretch out his legs as well. 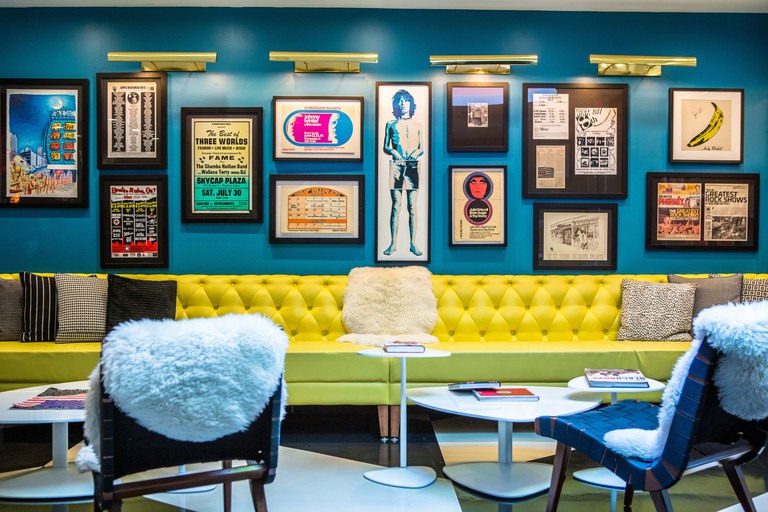 Courtesy of The Verb Hotel / Expedia
Designed to make you feel like you’re on a rock’n’roll odyssey, the Verb has a warning to party-poopers on one of its walls: “If the music’s too loud, you’re too old.” Everything here is about having as much fun as possible, whether it’s the in-room record players, courtyard pool, sushi served on Pac-Man tables or photo shoots in front of the red coach outside. If you have to ask for the complimentary earplugs at the front desk, you’re probably in the wrong place.

Get even more clued up on Boston by finding out where to stay, including some perfect apartments you’ll want to call home, bookable now with Culture Trip. Get some fresh air with our guide to bike rentals in the area, or take a hike in one of the beautiful trails nearby, before relaxing with a drink at one of the city’s cocktail bars.