© Quinn Dombrowski/Flickr
In the farm-to-table food industry today, it only makes sense that beer lovers are gravitating towards smaller, local brewers. Craft beer has exploded to the point where some are even questioning if there are too many brewers in the United States. For now, craft beer lovers can rejoice in Cambridge where there’s plenty of options from both near and far.

Located in the heart of Harvard Square, Russell House Tavern has a rotation of about a dozen craft beers for you to choose from. At the moment, most are local brews with over half made in Massachusetts. They’re also serving up some of the most creative dishes in Cambridge, making it a perfect spot for small bites after work, a celebratory dinner, or Sunday morning brunch.

Bar, Restaurant, American, Beer, Wine, Cocktails, Pub Grub, Vegetarian
Customers love this Porter Square bar for its unique selection and ever-changing beer list. With a total of 30 taps – 12 of them permanent – you’ll be sure to get a variety, including rotating cider, nitro, and rare finds. Can’t decide? Try one of their samplers of four beers, where either you pick your selection or leave it up to the staff.
More Info
Open In Google Maps
1667 Massachusetts Avenue, Agassiz, Cambridge, Massachusetts, 2138, USA
+16175471228
View menu
Visit website
Visit Facebook page
Send an Email
Give us feedback

At Hops Test Kitchen and Raw Bar, you’ll have a variety of beer available from which to choose. They have the classic wheat beers and IPAs, but with over 40 taps, be sure to check out their more unique pours, like sours, fruit, and bourbon barrel-aged brews. For food, Hops Test Kitchen combines Italian and French cuisines to create an entirely new culinary experience.

With 100 beers on draft, it’s no wonder Meadhall is a local favorite for craft beer. They’re often a lunch stop on Boston Brew Tours, and be sure to follow their social media to check out their tap takeover nights. 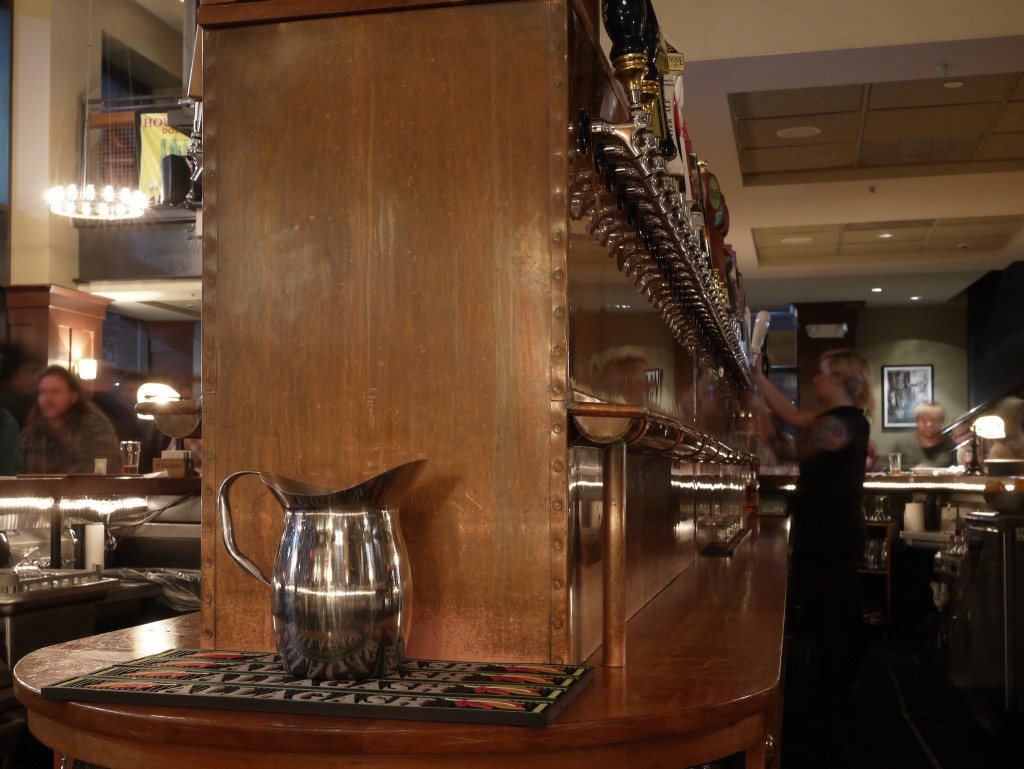 Not only can you get great craft beer at Atwood’s, but you can also listen to local musicians nearly every night. Their events calendar is full of local and touring musicians, most with a $10 cover or less. As for the massive beer list, their drafts and bottles are both hyperlocal and international, meaning you can try your favorites and some new selections.

Is there anything better than craft beer and homemade pizza? If you’re looking for this simple – but delicious – combination, Area Four is for you. Both on tap and bottled, they have local and international pours of beer. They let their pizza dough ferment for over 30 hours, add handcrafted ingredients, and wood fire it until crispy. It’s simplicity at its best.

Craft Ale Bar, Bar, Beer, Wine, Cocktails, Pub Grub, American, $$$
Courtesy of Lord Hobo
If a bar is also a brewing company, you know it’s a solid bar for your favorite pours. Lord Hobo Brewing Company is located in Woburn, MA, about 30 minutes from their Cambridge bar, where you can get free samples of their selection and sometimes even taste a new one. At the bar, you’ll not only find their own beers featured but also craft brews from all over the country.
More Info
Open In Google Maps
92 Hampshire Street, The Port, Cambridge, Massachusetts, 2139, USA
+16172508454
View menu
Visit website
Visit Facebook page
Send an Email
Give us feedback

Another stop on Boston Brew Tours, Cambridge Brewing Company only serves beer brewed by them – a menu that by no means reduces your options. They have everything from porters to pale ales, all coming from the mind of brewmaster Will Meyers. They pride themselves on their creative freedoms; while they brew American craft beer, they always have a new flavor or technique ready to brew.

Green Street Grill holds the longest standing liquor license in Cambridge, so, of course, it’s a great place to grab a beer. They’ve been in operation since the Great Depression and have become a local favorite. Their craft beer list is on the shorter side, but they only feature the best small breweries they can find.