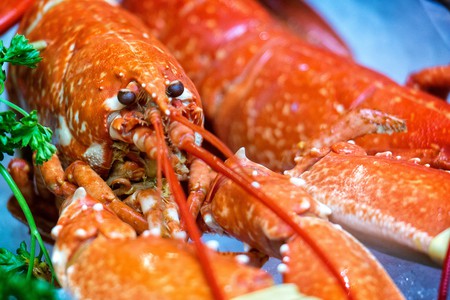 As we said before, when traveling with a massive live lobster, there are rules you’ve gotta follow.

Dinnah the lobster became an internet celebrity earlier this week, when its photo was shared by the TSA after being found in a cooler at Boston’s Logan International Airport, on its way to catch a Georgia-bound JetBlue flight.

The lobster’s owner, though, isn’t happy that his prize crustacean was subjected to scrutiny. Christopher Stracuzza, who purchased the lobster he dubbed “Dinnah” at Atlantic Seafood Market in Old Saybrook, Connecticut, says that the TSA’s actions invaded his privacy and also put the live lobster at risk. “Just because it was labeled ‘live lobster’ doesn’t mean there could be a bomb in there,” the Boston Globe quoted him as saying. “They are dumb. They are like the dumbest people in the world.”

Dude. Chill. It’s literally right there on the TSA’s website, spelled out in crystal-clear terms, that the lobster needs to be transported in a transparent and leakproof plastic container. We’re living in an era when laptops are banned on flights from certain African and Middle Eastern countries entering the U.S.; when you have to take off your shoes when going through airport security; when suspicious packages on planes can lead to really bad things. If you put a strange-looking object in an opaque cooler sealed with duct tape and try to get it onto an airplane, then yeah, security agents are gonna want to look into it.

The good news is, we finally have word of Dinnah’s ultimate fate. It was, indeed, dinnah for Stracuzza and several of his friends, served with melted butter and Bud Light. Leftovers, spread over several days, included lobster rolls and lobster mac-and-cheese, reports the New York Times.