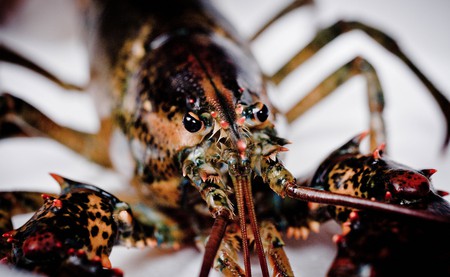 Just a reminder: If you’re going to pack a massive lobster in your checked luggage, there are rules you’ll need to follow.

Something strange turned up on a security X-ray scan at Boston’s Logan International Airport on Sunday. According to the Transportation Security Administration, it was a 20-pound live lobster, found in a passenger’s checked baggage.

The security agent not only inspected it, he took a photo with the enormous crustacean.

.@TSA officers are skilled at screening all sorts of items in checked baggage…including this 20+ pound lobster at @BostonLogan pic.twitter.com/euhyyO6F7V

TSA spokesman Michael McCarthy says the lobster is the largest he’s ever seen, and almost certainly the largest one even screened by the TSA, according to the Associated Press.

To put its size in perspective, when you order a “large” lobster at a restaurant, you’re probably getting something weighing less than two pounds. This is ten times bigger.

The lobster’s size might be notable, but its presence on an airplane is not, as it turns out. “It’s actually fairly common in the New England region,” McCarthy tells the Boston Globe. The TSA even has a webpage explaining how to transport a live lobster by air: “A live lobster is allowed through security and must be transported in a clear, plastic, spill-proof container. A TSA officer will visually inspect your lobster at the checkpoint. We recommend that you contact your airline to determine your airline’s policy on traveling with your lobster before arriving at the airport,” the TSA’s instructions read, making it sound as though it’s not any more out of the ordinary than traveling with your dog.

This particular lobster, however, was packed in an insulated cooler. It “cooperated quite nicely with the screening process,” says McCarthy. The lobster was allowed to continue on to its final destination, according to The Points Guy…though it’s not known whether that ultimate destination includes boiling water in a pot.