Poe was the archetypal struggling writer, barely managing to scrape together a livelihood from his work. He lived hard and died a mysterious death on the streets of Baltimore in 1849, aged only 40. By then he had already produced a distinguished body of work, effectively inventing detective fiction and mastering the Gothic horror genre. There are plenty of curious and strange quotes attributed and misattributed to Poe, but here are 12 taken from his works, complete with explanations. 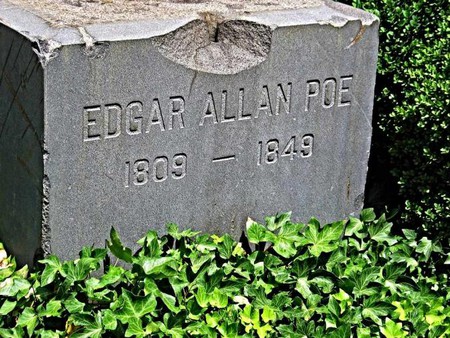 ‘It is not improbable that a few farther steps in phrenological science will lead to a belief in the existence, if not to the actual discovery and location of an organ of analysis.‘

These are the first words of the 1841 edition of ‘The Murders in the Rue Morgue.’ Phrenology was a mid-19th century obsession and a topic to which Poe often refers. Today we’d call it a pseudoscience as its claims have been disproved. Phrenology was the belief that the mental faculties each had a separate location in the brain, and that by reading a man’s skull could reveal his moral character, his intelligence, and mental development. You can still buy phrenological busts used by the famous Fowler brothers that show the brain locations of faculties like foresight and observation.

‘Men have called me mad: but the question is not yet settled, whether madness is or is not the loftiest intelligence.’

Madness is an appropriate theme for Poe to have explored in the story ‘Eleonora.’ He was, after all, named after Edgar, the character in King Lear who feigns madness as Tom o’Bedlam. And there’s a Shakespearean root to the notion that madness might be a form of intelligence rather than mere insanity: ‘The lover, the lunatic, and the poet//Are of imagination compact,’ wrote the Bard. That madness could be the source of immense creativity became a touchstone of Romanticism in the early 19th century. Byron called himself ‘half-mad’ during the composition of ‘Childe Harold.’ To be blessed with visionary genius was synonymous with madness. 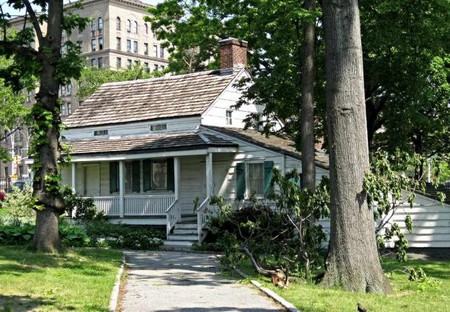 ‘There are combinations of very simple natural objects, which have the power of thus affecting us, still the analysis of this power lies among considerations beyond our depth.’

This line, from the short story ‘The Fall of the House of Usher,’ is a pretty good summation of the mystery that lies behind Gothic horror writing. What is it about certain locations and images that unnerve us? Poe learnt well from Horace Walpole, the progenitor of Gothic fiction who used crumbing, ancient castles and a hint of the supernatural in his novel The Castle of Otranto. In ‘The Fall of the House of Usher,’ the narrator is initially disquieted as he approaches the ancient house by the dead trees, the grey, isolated lichen-covered building — ‘an atmosphere that had no affinity with the air of heaven.’

‘I hold that a long poem does not exist. I maintain that the phrase, “a long poem,” is simply a flat contradiction in terms.’

Try telling that to Homer, whose Odyssey and Iliad extend over thousands of lines, or to Chaucer, Milton, Spenser or Wordsworth, all of whom penned long, book-length poems. Poe, on the other hand, writing in his essay ‘The Poetic Principle,’ maintained that a poem must elevate the soul, and since all sensations felt by the soul are by their nature fleeting and transitory, a poem could not be overlong, or it would cease to fulfill its function as a poem. And that’s why his own works, like ‘Annabel Lee,’ ‘The Raven,’ and ‘Al Aaraaf’ are no longer than a few pages in length.

‘He boasted to me, with a low chuckling laugh, that most men, in respect to him, wore windows to their bosoms, and was wont to follow up such assertions by direct and very startling proofs.’

It’s a familiar scene to us now: the brilliant detective shows off to his companion, seeming to step inside his mind and read his thoughts. And it’s largely familiar from the Sherlock Holmes stories, where poor old Watson is frequently stupefied by the brilliance of Holmes at deducing the inner workings of his mind. But Sir Arthur Conan Doyle took the trick from Poe and his gentleman detective Dupin, along with the foolish police and the brilliantly rational methods of solving the case. This quote comes from the first Dupin story, ‘The Murders in the Rue Morgue,’ which also gave us the first locked-room mystery. 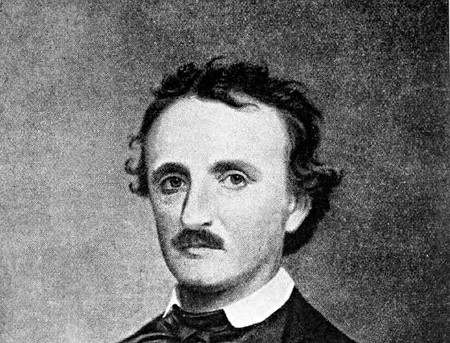 ‘In beauty of face no maiden ever equalled her. It was the radiance of an opium-dream — an airy and spirit-lifting vision more wildly divine than the phantasies which hovered about the slumbering souls of the daughters of Delos.’

This is how the narrator of ‘Ligeia‘ describes his beautiful wife. Poe’s relationship with opium is a little hazy. It’s sometimes been presumed he was an addict, but there is no evidence for this. Rather, he was likely alluding to the works of writers who did have first-hand acquaintance with the drug, which was easily available in the form of laudanum. Poets like Coleridge, who claimed to write ‘Kubla Khan’ under the influence, Keats and Shelley and writers like de Quincy all used opium to induce a heightened sense of consciousness. The daughters of Delos were the Greek goddesses of wine, oil and grain.

‘I will, therefore, take occasion to assert that the higher powers of the reflective intellect are more decidedly and more usefully tasked by the unostentatious game of draughts than by all the elaborate frivolity of chess.’

Another from ‘The Murders in the Rue Morgue,’ this counter-intuitive claim comes from the narrator and friend of Dupin. Think of the great minds who have played chess, men like Vladimir Nabokov, Napoleon, Alan Turing and Marcel Duchamp, and it might seem odd to elevate draughts, or checkers, above it as game of intelligence. But the narrator’s logic runs that whilst chess is merely a game of calculation, draughts is a game of observation and inference. And whilst chess rewards concentration, draughts will reward the more analytical player. 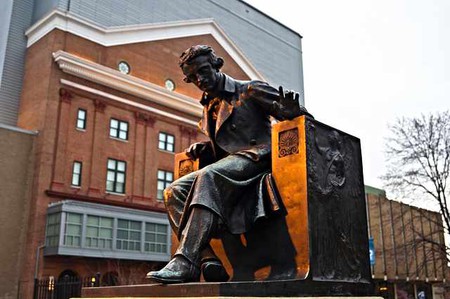 ‘The galvanic battery was applied and he suddenly expired in one of those ecstatic paroxysms which, occasionally, it superinduces.’

Poe refers in his story ‘The Premature Burial‘ to a series of cases involving individuals believed to have expired and been buried alive. In one case, the presumed deceased tunnels upwards, is found, and then in his stupor, is subjected to galvanism. In another, the battery is used to revive a fresh corpse. Galvanism was discovered by Luigi Galvani, whose application of electricity to the legs of a dead frog caused the limb to twitch, in the 1790s. His nephew Giovanni Aldini used electricity on the corpses of executed criminals at Newgate Prison, causing eyes to open and arms and legs to twitch. Galvanic experimentation on the dead was common in 19th-century laboratories, and you’ll find it referenced in Mary Shelley’s Frankenstein.

‘To be buried alive is, beyond question, the most terrible of these extremes which has ever fallen to the lot of mere mortality.’

Burial alive and burial inside a wall whilst still alive, sometimes known as immurement, recur time and again in Poe’s stories. Not only does he ponder burial alive in ‘The Premature Burial,’ but in ‘The Cask of Amontillado‘ as well. The narrator Montresor lures his foe Fortunato to his cellar in order to bind him in chains and brick up the walls around him. Why did Poe so often return to these recherché forms of death in particular? Perhaps because they were as terrible as his imagination could conjure, as a man must be conscious of his suffering as he waits to asphyxiate or to starve. 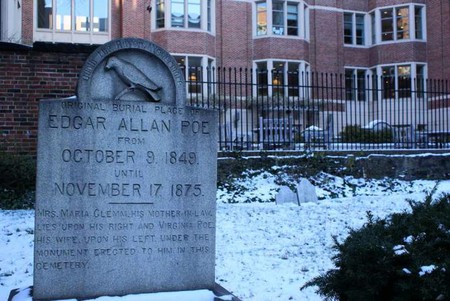 ‘Among other things, I had the family vault so remodeled as to be readily opened from within.’

It wasn’t just Poe who was wracked by the fear of waking up after being buried presumed dead. His narrator in ‘The Premature Burial,’ a sufferer of catalepsy that could be mistaken for death, details the precautions he would take against being buried alive: a lever to open the vault, food and water within the burial chamber, easy-to-open coffin door, bells to alert those above. Indeed, these are not as odd as they seem to us. The Victorians were deeply worried about live burial. Coffins were designed with windows in them, air systems, and bells linked to the world above. Organizations dedicated themselves to preventing premature burial.

‘There are certain themes of which the interest is all-absorbing, but which are too entirely horrible for the purposes of legitimate fiction.’

Poe isn’t always remembered for his humor or irony, but the opening line of ‘The Premature Burial’ seems to fly in the face of nearly everything that he’s famous for. The same man who wrote that line created stories narrated by murderers like Montresor in ‘The Cask of Amontillado’ and ‘The Tell-Tale Heart,’ the protagonist of which kills for no reason and cuts up the body of an old man and buries it under the floorboards. With Poe, there’s nothing that’s too horrible for fiction — not murder, derangement or torture.

‘It is the object of our newspapers rather to create a sensation — to make a point — than to further the cause of truth.’

This contemporary-sounding line doesn’t need much explanation. It comes from the second Dupin case, ‘The Mystery of Marie Rogêt,’ as Dupin sifts through the Parisian newspaper reports of the details of the murder with a mind to determining facts from embellishments. Even in the 19th century, it was worth reading many parts of the press with a healthy dose of skepticism.