This Maryland Town is Where F. Scott Fitzgerald Lies 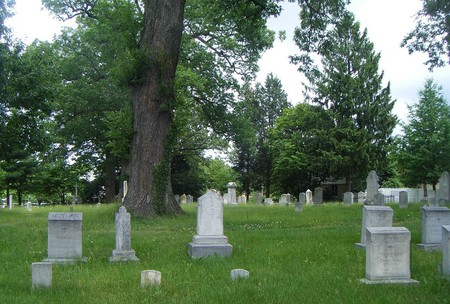 In a grassy Catholic cemetery right next to a major road in Montgomery County, Maryland, is the grave of one of the most famous American writers of all time. While many people know F. Scott Fitzgerald’s work, most people don’t know that he’s buried in Rockville, Maryland, a suburb of Washington, D.C. So how did the author of The Great Gatsby end up in a place he neither lived nor died?

F. Scott Fitzgerald was born in St. Paul, Minnesota in 1896, and his given name was Francis Scott Key Fitzgerald. His father was from a prominent Maryland family, and Fitzgerald was named after a famous relative who wrote the poem that became the Star-Spangled Banner, which was set to music and became the U.S. national anthem in 1916. Francis Scott Key was also a prominent lawyer in 19th-century Maryland, but has come under scrutiny more recently for his anti-abolitionist views and racist lyrics in the song.

Fitzgerald lived a lot of places in the United States including St. Paul, Minnesota; Buffalo, New York; Princeton, New Jersey; Alabama; New York City; Towson, Maryland; and finally, Hollywood. He wrote and published novels, but his real critical success would come later. When he suffered a heart attack and died in 1940, his wife Zelda was in a sanatorium in Asheville, North Carolina, and believed he should be buried in the family’s plot at the St. Mary’s Catholic Church in Rockville, Maryland. However, the parish priest didn’t want Fitzgerald there. 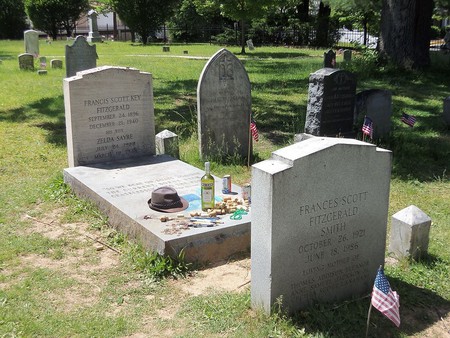 Fitzgerald had been a bad Catholic, a notorious drunk who didn’t take communion or go to confession, and the priest in charge refused to bury him at St. Mary’s. So Zelda paid for a plot half a mile away at the Rockville Cemetery, and when she died eight years later, the grave was dug deeper and she was buried on top. Over the years, people visited the grave and offered tributes to the couple, and when the grave started looking poorly in the early-1970s, the couple’s daughter Scottie Fitzgerald revealed they actually wanted to be buried in St. Mary’s. Either because of the couple’s rising literary recognition or because the Catholic Church had become more liberal, F. Scott and Zelda were allowed to be interred in the Fitzgerald family plot. In 1975, they were reburied in St. Mary’s, where fans still pay tribute today.