A Baltimore Holiday Tradition Lights Up a Whole City Block 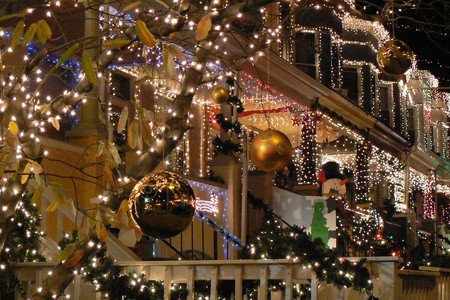 For over 70 years, the 700 block of 34th Street in Hampden has celebrated the holiday season with style, with over two dozen rowhouses decked out in elaborate lights and decorations. Known as the “Miracle on 34th Street,” this signature holiday event draws people from around the world to Baltimore each year.

From Thanksgiving weekend through New Year’s Day, Baltimore’s Miracle on 34th Street wows visitors with its bright and over-the-top holiday displays. Recognized for having the “most outrageous Christmas lights” in Maryland, nearly every home on the block participates, trimming their rowhouses with twinkle lights along the roofs, windows and porch awnings. 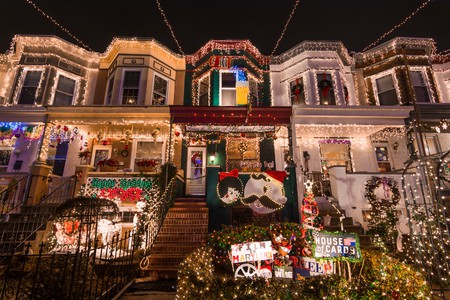 But beyond the basics, each home has a unique holiday theme and style, with all sorts of Christmas decorations and Hanukkah menorahs. Alongside the familiar candy canes, inflatables and nativity scenes, you’ll find pink flamingos, Baltimore icons Natty Boh and Utz Girl, a light-up Maryland crab and a 10-foot (three-meter) sculpture made from hubcaps, known as the Hubcap Christmas Tree.

According to Baltimore Magazine, Miracle on 34th Street, also known as the Hampden Christmas Street Holiday Show, “would not be as astonishing if it were all commercial decorations and no original art, nor if it were all original art and no traditional lights and figures. It’s the combination of the two that makes the block so special.” 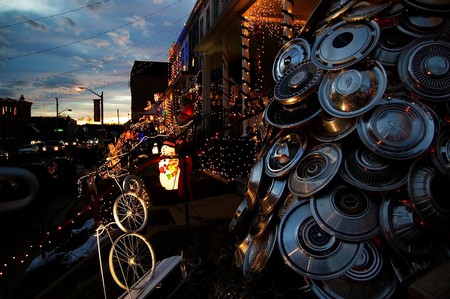 The tradition began in 1947 to commemorate the premiere of the now-classic film Miracle on 34th Street. But it’s really in the past 30 years, when Bob and Darlene Hosier moved to the block and began hooking up brilliant lights and holiday music to their home, that Hampden’s Miracle on 34th Street grew into what it is today, attracting thousands of visitors each year.

The lights stay on from 6pm to 11pm throughout the season, except for Christmas Eve and Christmas Day, when the homes stay lit all day and night. People are welcome to drive past the lighted houses between Keswick Road and Chestnut Avenue, but most recommend walking, both to take in the decorations up close and to ease up on neighborhood traffic. While the street is vendor free, Jim Pollock, creator of the Hubcap Christmas Tree among others, holds an open house for local artists in his home, which gets plenty of foot traffic throughout the season. 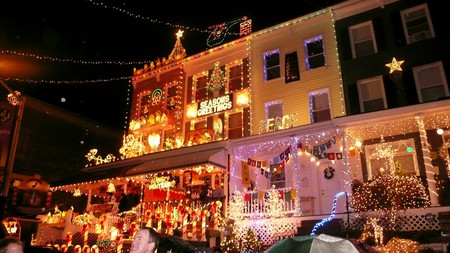 Says Pollock, in a 2008 article for Baltimore Magazine, “We’ve had businesses who wanted to sponsor us, but if you had a sign out front that said, ‘Brought to you by…,’ it would take something away from it. It’s not a business; it’s not a show; it’s not an attraction. It’s a home that’s decorated for the holidays.” 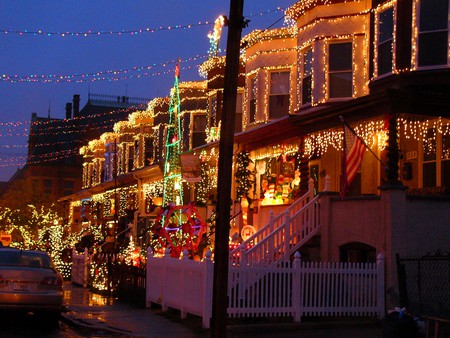 Miracle on 34th Street attracts thousands each year to walk the block and admire the lights. | © Kathleen Tyler Conklin / Flickr

Still, local Hampden and Baltimore businesses benefit from the influx of visitors each year. Union Craft Brewery even creates a specialty brew each year for the occasion: the Miracle Weizenbock. Plus, as the families who helped the tradition grow move on from 34th Street, new residents are happy to take up the reins, some even moving there just to be in on the celebration.

All in all, Baltimore’s Miracle on 34th Street is perhaps best summed up by the signs in front of one 34th Street rowhouse: “Oh boy – what a block!”