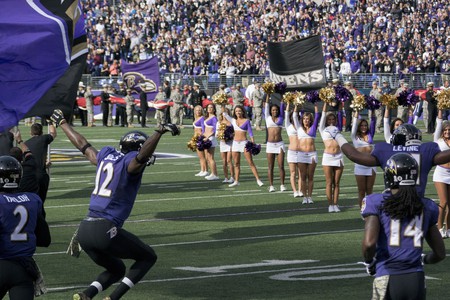 If you need to know anything about Baltimore, Maryland, it’s that the city of Baltimore loves its football team, the Baltimore Ravens. Whenever the Baltimore Ravens are playing a game, the city seems to fall silent as everyone is either at home, glued to their TV screens, or at the game itself. Either way, on game day, fans arriving at the M&T Bank Stadium enjoy taking pictures and posing in front of one of Baltimore’s most famous linebackers, Ray Lewis. Yet how did that statue come to be erected in front of the stadium?

Who is Ray Lewis?

The Ray Lewis statue was erected outside of the M&T Stadium in 2014. This statue is a signal of strength, determination and fans love to pose next to it or imitate Ray Lewis’ famous pose. When he used to play for the Baltimore Ravens, especially at home games, when he came out of the tunnel onto the field, Ray Lewis did a victory dance each and every time. This was something that kept the crowd motivated, his teammates ready for battle, and put a smile on everyone’s face who watched him that game day.

It’s easy to see why the home team loves him, and hopefully, this statue will remain where it belongs – in Baltimore.