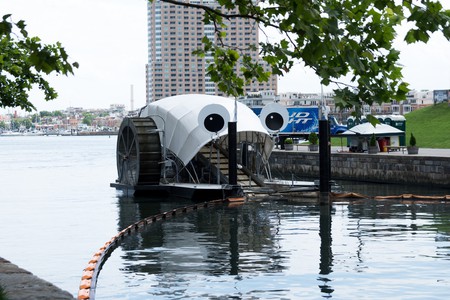 Who would’ve guessed that a googly-eyed solar- and water-powered water wheel would have its own social media accounts and merchandise?

Mr. Trash Wheel has been keeping garbage out of Baltimore’s Inner Harbor since 2014. Part of the Waterfront Partnership of Baltimore’s Healthy Harbor Initiative, it sits at the mouth of the Jones Falls River, which flows into the Inner Harbor and the Patapsco River before feeding into the larger Chesapeake Bay. Through the power of the river, with backup solar panels for days when the current isn’t strong enough, its huge forks and conveyor belt pull trash out of the water, disposing it into the dumpster at the vehicle’s rear.

By collecting the garbage that washes into the river, Mr. Trash Wheel protects local marine life and keeps the harbor clean. The waste collected is also burned and used to power Maryland homes. According to Healthy Harbor’s data, as of May 2018, Mr. Trash Wheel has picked up over 800 tons of trash, which has powered at least 10,526 homes.

Co-designer John Kellett had worked on the harbor as a sailor, educator, and director with Historic Ships of Baltimore and saw the garbage in the water on a daily basis. After researching the problem and finding no existing solutions, he designed a prototype trash wheel with partner Dan Chase in 2008. While the first wheel proved too small to handle the load, the Waterfront Partnership of Baltimore took notice and raised funds for a bigger trash wheel that launched on May 9, 2014.

It wasn’t long before the new trash wheel gained attention. When their video demonstrating the trash wheel, above, went viral, Healthy Harbor knew they needed to take advantage of the attention to raise awareness and funds for conservation efforts. What Works Studios, an ad agency, suggested injecting a little personality into the invention. Thus “Mr. Trash Wheel” was born, with Facebook, Twitter, and Instagram pages as proof, pairing a cheesy but earnest online voice with a googly-eyed profile picture.

As of July 2018, @MrTrashWheel has over 16,600 followers, and his cartoonish character appears all over, from T-shirts and ugly holiday sweaters to Halloween costumes. Googly eyes were installed on the real trash wheel to fit the online personality. A second trash wheel, female Professor Trash Wheel, was launched in Canton in 2016, supported by people from 36 states and a dozen other countries. Peabody Heights Brewery even named beers after the duo—Mr. Trash Wheel’s Lost Python Ale and Blinded Me Wit Science—and a bassist at the Baltimore Symphony Orchestra came up with a catchy theme tune.

But how does the online success translate into environmental action? According to Rebecca Woods, executive director of Baltimore’s Environmental Control Board, in an article for PBS NewsHour, “Mr. Trash Wheel helps to connect the dots and helps residents understand the impact of their actions.” Because the Jones Falls River has a watershed of 58 square miles (150 square kilometers), the trash that ends up in the Inner Harbor originates on streets from miles around, washed into storm drains during a rainstorm. Through the sheer amount of garbage collected and the social media conversations they start, Mr. Trash Wheel and friends illustrate how keeping waterways clean starts on land.

Along with this, Waterfront Partnerships of Baltimore has recently stepped up its educational efforts with the new Captain Trash Wheel at the Masonville Cove Environmental Education Center and the Order of the Wheel, an exclusive “not-so-secret society” of volunteers committed to keeping neighborhoods clean. With continued efforts, their goal is to make the Inner Harbor swimmable and fishable by 2020—and, one day, to give Mr. Trash Wheel an early retirement.