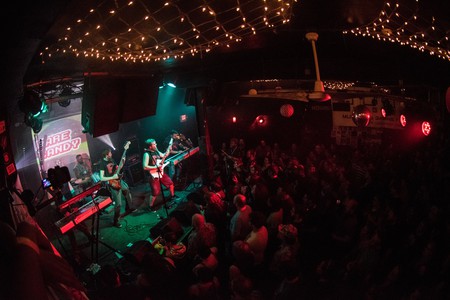 At the heart of Baltimore’s vibrant music scene is BitGen Gamer Fest, a music festival dedicated to celebrating the niche genre of video game music. With nearly 20 bands performing on two floors, the event includes 10 hours of live music. Plenty of arcade, pinball, and console games are available to play, plus cool gamer swag and cold drinks to enjoy, making it a gamer’s paradise.

For Tyler Merchant, one of the festival organizers, “What we like the most about BitGen is that it has the feel and atmosphere of a rock concert with an amount of content that you could normally only find at a con. It’s like a gaming convention crammed into a small club. People seem to like the intimacy of it.”

Game music bands, like the ones at BitGen, look back to the sounds of their childhood to perform covers, mashups, and original compositions based on beloved game soundtracks. While heavy metal is the most common style at BitGen, other genres like electronic dance music and rap are also in the lineup, all recreating the high-energy fun of video games.

“BitGen prides itself on showcasing bands that those [game music] fans already enjoy,” says Merchant, “as well as exposing them to acts they might not be familiar with, so that kind of show is enticing to a lot of people.”

BitGen Gamer Fest began as “8-Bit Genocide” in 2005, when founders John DeCampos and Chris Baines, performing at Penn State University’s since-extinct “Video Game Armageddon” festival, decided to adopt the idea and test it in another city. Baltimore ended up being the perfect location, with its appreciation for quirky nerd culture and home-brewed music. “There is a strong community of video game music enthusiasts in this area,” says Merchant. “I know of at least three video game music bands that play regularly in Baltimore, so there is a large built-in audience in the city and surrounding area.”

But even if you’re not already into the video game music scene, you’ll find something to enjoy. With covers of popular themes from Super Mario, The Legend of Zelda and Final Fantasy franchises, as well as peppered-in references to other nerd culture, like Star Wars, even casual nerds and gamers will have a good time.