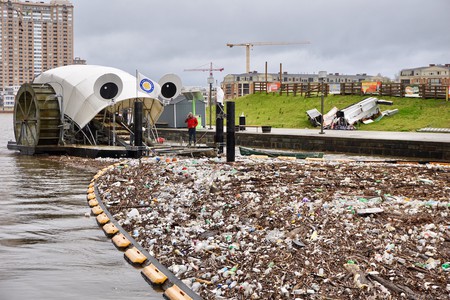 From T-shirts to tattoos and everything in between, fans of Mr Trash Wheel and Professor Trash Wheel have made their love for the Baltimore icons clear. The first annual Trash Wheel Fan Fest aimed to honor the characters’ influence on the local community with a night of incredible fan works, food trucks and beer.

“When people started getting tattoos of the trash wheels, that’s when we said, ‘We need to do something to celebrate how amazing our fans are,’” Adam Lindquist, director of the Healthy Harbor Initiative that runs the trash wheels, tells Baltimore Magazine.

The pint glasses for Fan Fest are the best yet! Get these beauties, see pieces of trash wheel history like my first googly eyes, enjoy trash wheel inspired music and art, and sip on my Lost Python Ale tomorrow. Get your tickets now: bit.ly/TrashWheelFanFest!

Launched in May 2014 as a way to clean up litter swept into the Inner Harbor from the Jones Falls River, the Inner Harbor Water Wheel quickly gained an online following after a video of it gobbling garbage went viral. Parent company Waterfront Partnership took advantage of the buzz by hiring a marketing agency to create a social media persona to promote and encourage conservation efforts.

The water wheel was dubbed “Mr Trash Wheel,” and the following took off. This led to the eventual creation of the female Professor Trash Wheel, stationed in Canton Harbor, and Captain Trash Wheel, at the Masonville Cove Environmental Education Center.

The Canton Trash Wheel, #professortrashwheel uses water currents to provide the power to turn the wheels, which lift trash and debris and places it into a barge. @mrtrashwheel @healthyharborbaltimore #theoharagroup #baltimore #baltimorerealestate

But the fandom doesn’t stop at merchandise and Twitter likes. Trash Wheel fans, particularly volunteers in the Order of the Wheel (below), apply Mr Trash Wheel’s philosophy in real life, taking to the streets to keep the city clean.

Says Lindquist, in Waste Today, “He’s really become the mascot now for the restoration of the Baltimore Harbor. If you care about clean water in the harbor, you know who Mr Trash Wheel is, and you follow him on social media.”

Lovin' these photos from the Order of the Wheel. Don't miss the next one! Sign up at mrtrashwheel.com.

Other festivities for the Trash Wheel Fan Fest included Jeopardy-style trivia, a costume contest, performances like the one below and a Mr Trash Wheel museum featuring some of the weirdest items ever found in his “stomach.” Ticket proceeds benefited Healthy Harbor in its efforts to make the Inner Harbor swimming- and fishing-friendly by 2020.

Plans for future fan festivals are unclear for now. But whether it’s a one-time event or becomes something greater, the Trash Wheel Fan Fest will be remembered as one of those weird, wonderful things that can happen only in Baltimore.

ICYMI: We had the most epic rendition of the trash wheel song yet! Thank you everyone for such a great Fan Fest! There will be more pictures and videos to come!