A Guide to the Kinetic Sculpture Race in Baltimore, MD 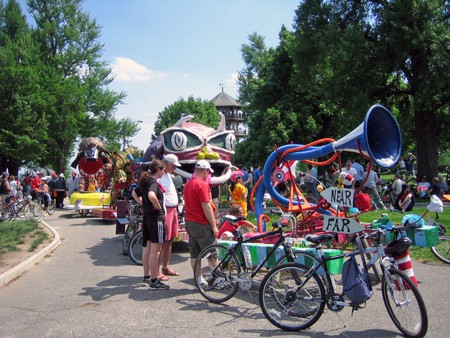 What is kinetic sculpture racing?

A kinetic sculpture is a work of art that must be able to move through multiple terrains, including water, under human power. The race pits teams of pilots, or “Kinetinauts,” against each other to see not just whose sculpture moves the fastest or looks the coolest, but which ones can survive all the obstacles thrown their way.

The official site suggests how to avoid common errors these homemade contraptions are prone to, but the biggest thing is to test, test, and test some more. Kinetic sculptures also need to meet certain requirements, from law and safety standards to the “Homemade Sock Creature” (a comfort object made from socks) that must be carried by the sculpture for the whole race. Minor penalties, however, can be negotiated with the Kinetic Kops for a bribe. 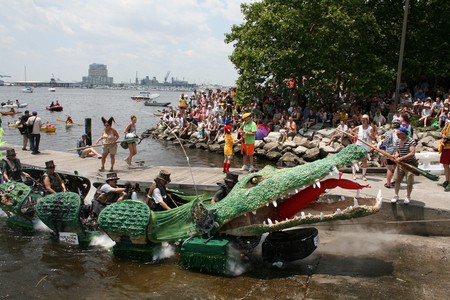 Fan favorite Tick Tock the Crock getting out of the water during Baltimore's Kinetic Sculpture Race. | © Fred Schroeder / Flickr

The history of kinetic sculpture racing

In 1969, Ferndale, California sculptor Hobart Brown turned his son’s tricycle into a decorated ‘pentacycle.’ Fellow artists challenged him to race it against their own creations, and the event gained publicity due to pictures of a recognized congressman riding the pentacycle.

Over time, this kinetic sculpture race grew into a 45-mile, three-day cross-country course, characterized by Brown as, “Adults having fun so children will want to grow older.” The American Visionary Art Museum worked with Brown to bring the kinetic sculpture race to the East Coast in 1999, a good fit for Baltimore‘s quirkiness.

The 14-mile Baltimore Kinetic Sculpture Race begins at AVAM, traveling up the steep Federal Hill. If vehicles survive the climb, they proceed to travel around the Inner Harbor to the Canton Waterfront, where they splash down and test their seaworthiness. Whatever sculptures don’t sink go on to Patterson Park, where they face an obstacle course of sand pits and mud, before racing back to the finish line at AVAM.

The most iconic kinetic sculpture to watch for is Fifi, a giant pink poodle that has raced every year since 2001. She is now the official race mascot, with a permanent exhibit at AVAM. 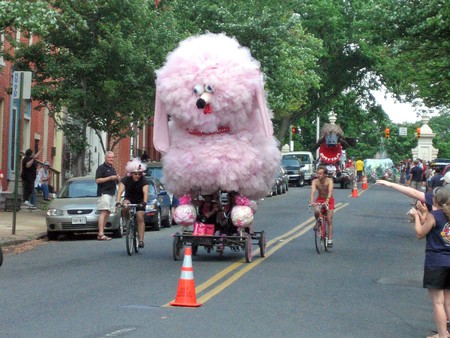 Fifi the Poodle, the mascot of the Kinetic Sculpture Race, has been in every race since 2001. | © Joe Loong / Flickr

Unlike other races, you don’t cross the finish line first to win. There are at least 14 awards up for grabs, the biggest being the Grand Mediocre East Coast Championship, given to the kinetic sculpture that finishes exactly in the middle. The fact that this is impossible to plan puts the emphasis on fun over the victory. Speed is awarded too, along with creative and engineering excellence. Sillier awards include Best Bribe, the Next to Last Award, and the Golden Dinosaur, for the first or most memorable sculpture to fall apart.

People who aren’t racing can still get in on the fun. The Kinetic Sculpture Race is a spectator sport, with audiences encouraged to dress up in goofy costumes of their own as they cheer on their favorite sculptures. You can either watch from a spot along the route, like AVAM, the Canton Waterfront, or Patterson Park, or follow the race via bicycle, water taxi, or car. There are food trucks and souvenir stands set up along the route to grab something without missing the action. 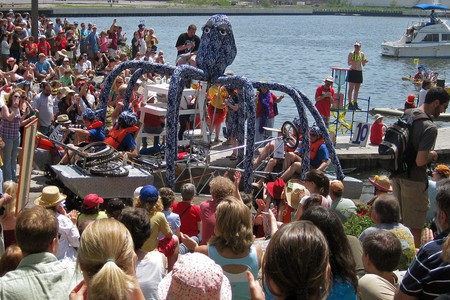