A Brief History of The Senator Theatre in Baltimore, MD 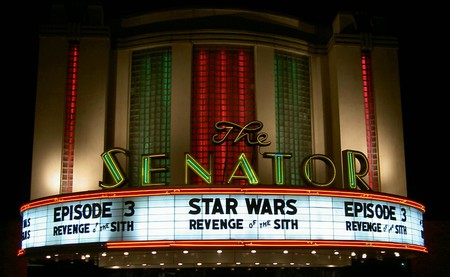 You may know a bit about the cinematic history of Baltimore, as the birthplace of John Waters or the setting of films like Sleepless in Seattle. But you may not know that the city also boasts some amazing historic movie theaters. The Senator Theatre, part of the National Registry of Historic Places, is particularly notable as one of the only remnants of Art Deco architecture left in the city. Here’s a brief history of this cinematic and architectural treasure.

The Senator Theatre opened on October 5, 1939, with a showing of Spencer Tracy’s Stanley and Livingstone. Designed by John J. Zink, a local architect whose firm designed over 200 theaters in the U.S. from the 1920s–1950s, it is one of only eight of his theaters still open today. The Senator was built as a neighborhood movie house for Durkee Enterprises, at that time one of the most established movie distributors in the city, and was family owned and operated for 71 years, resisting the growth of multiplexes as well as the shutdown of bigger competitors like the Hippodrome (now a live performance venue).

Though the community rallied and raised money to keep the theater from outside ownership, debt eventually caused The Senator to buckle, going to auction in 2009. However, the City of Baltimore recognized the theater’s importance and bought it themselves, reopening it in 2010 under a new management team experienced in running the historic Charles Theatre. It closed again for renovations in 2012, reopening on October 10, 2013, with three smaller screens and restored artwork and decorations based on the original 1939 design, right down to the paint colors. 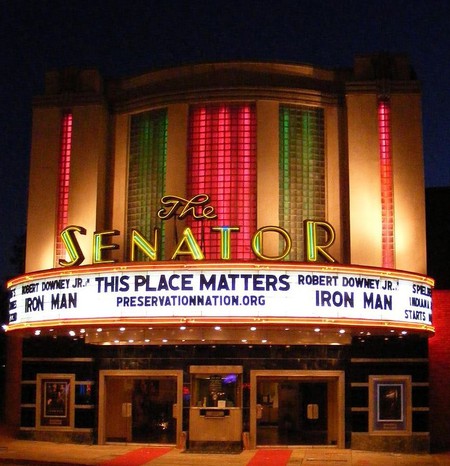 What makes The Senator so unique is the Art Deco design that has remained mostly intact, a marvel for buildings of its age. Its limestone-and-glass-block façade, with a semi-circular marquee and free-standing neon sign, give it a signature streamlined look which has been featured in commercials, movies—Cecil B. Demented and Twelve Monkeys— and even a Mario music video. The interior includes original terrazzo floors, aluminum trim, and murals that depict the history of the performing arts. The lobby chandelier, added during the renovation, was even made to match the one in vintage photographs.

Historic premieres at The Senator include Diner and the original 1988 Hairspray, both set in Baltimore. Appropriately, the theater marked its 2013 reopening with a benefit screening of Hairspray, where director John Waters was once again in attendance. Films like Ladder 49 and Runaway Bride, both shot in the region, had their regional premieres there as well. The Senator has also frequently hosted the Maryland Film Festival, as well as fundraisers and screenings with stars such as Edward Norton, Jada Pinkett Smith, John Travolta, and Matt Damon. Most of these events, as well as local cinematic achievements, are documented on the sidewalk outside the theater, known as the “Sidewalk of Fame.” 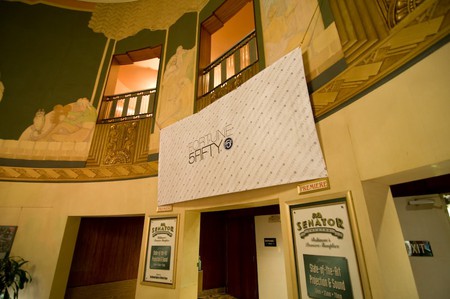 Today, The Senator Theatre is recognized as a top historic independent movie house, named one of the top 20 theaters worldwide in 2014. It captures the classic moviegoing experience without restricting itself to classic films, with both digital and traditional 35-millimeter projectors. It is a popular venue for midnight screenings of fan favorites like Harry Potter and Star Wars, and it hosts annual holiday screenings of It’s a Wonderful Life and the 1951 A Christmas Carol to drum up donations toward the Maryland Food Bank. So, if you want a taste of old-fashioned movie magic, visit The Senator Theatre next time you’re in Baltimore.