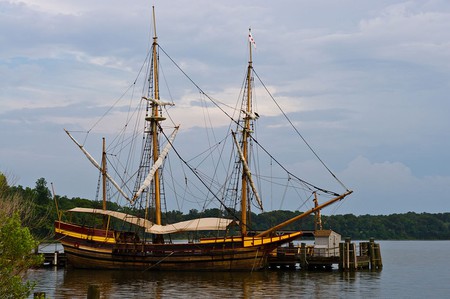 St. Mary’s City, Maryland, is a great place to explore the early history of the state, the only predominantly Catholic British colony and a site vital to the tobacco trade that formed the heart of Maryland’s economy. Learn more about the history of Maryland’s first British colonial settlement and the first capital of the colony.

In 1634, 150 settlers arrived on a peninsula between the Chesapeake Bay and the Potomac River on two ships, the Ark and the Dove. The effort was led by George Calvert, a British Lord who personally saw the persecution of Catholics in England in the early 1600s. He thought he could profit off of a colony in North America that would welcome all religions, a fairly progressive idea at the time. A few Jesuit priests were among the first settlers, and they were responsible for building the first chapel in St. Mary’s. The Jesuits constructed a brick Catholic Chapel in 1667, which remained in use until 1704. A governor decreed that the church should not be used for religious purposes, and the priests eventually dismantled the building. The foundation remained, and in 1997, the Historic St. Mary’s City Foundation started a campaign to rebuild the church. 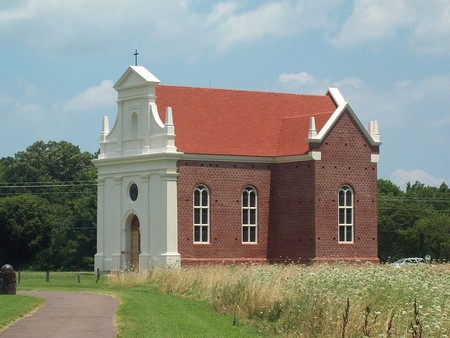 During the colony’s early years, there was no city—only farms and settlements on the land. The land that the British settlers arrived on had been the home of the Piscataway Indians, who allowed the settlement on their property, and the Yaocomaco, who helped clear land for the settlers. While the settlers and Native Americans lived peacefully for a while, the settlers believed in private property rights and now called this land their own.

Tobacco became the main crop in Maryland; it was a special variety with a slow-burning time that was highly sought after in Europe. While indentured servants who served a master for a period of time were also among the first settlers, the slave trade brought enslaved Africans to Maryland. Because a system of race-based slavery was more lucrative than servants, enslaved Africans and African Americans soon became the majority of the workforce in St. Mary’s tobacco fields. African Americans were enslaved in St. Mary’s County until 1864.

The colony grew with the wealth from tobacco, but in 1695, St. Mary’s City was replaced by Annapolis as the colony’s capital. Today, you can visit Historic St. Mary’s City. The living history and open-air museum shows life in a 17th-century settlement, with interpreters explaining the stories of the Europeans who came looking for a better life, the Native Americans who traded with the settlers, and the enslaved African Americans who worked the land. The Visitor Center gives an overview of the history of the settlement, and you can also visit a replica of the Dove, walk on trails surrounding Historic St. Mary’s City, and see the small town as it once was.