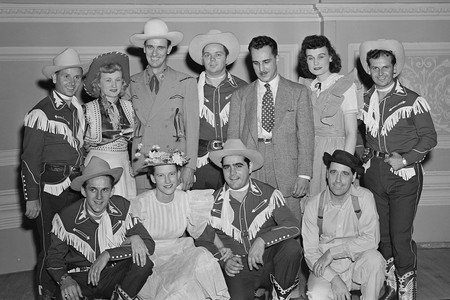 On the border between Maryland and Pennsylvania, there used to be a country music mecca. While northeastern Maryland isn’t thought of as the home of country music, the stage at New River Ranch saw the biggest stars of early country music, from George Jones to the Louvin Brothers. Here’s how a small outdoor stage located between Washington, D.C. and Philadelphia became a famous country music scene.

The Reed and Campbell families

As a young girl, Ola Belle Campbell learned how to play the banjo and sing in the mountains of North Carolina. Her family moved to southern Pennsylvania when she was a teenager, and in 1949, she married Bud Reed, who was born in Maryland just across the border. Ola Belle loved old-time country music and wanted to bring that music to the area around Rising Sun, Maryland. With Bud, she started and operated Rainbow Park across the state line in Lancaster County, Pennsylvania, just a year after they were married.

The couple then partnered with Ola Belle’s brother Alex Campbell and opened New River Ranch close to Rising Sun. Ola, Alex, and other local musicians would play at the park, but then they managed to book bigger acts that had way more appeal. The two parks were about an hour outside of Baltimore and an hour-and-a-half outside D.C., and on the weekends, thousands of folks from the whole area would come up to hear country music’s biggest stars.

New River Ranch was a pre-Woodstock, pre-music festival venue. It was a time when touring acts of all types of music would get shows where they could find them, including high school gymnasiums and community centers. Country musicians passing through northeast Maryland welcomed the opportunity to play for a crowd on a Sunday afternoon, even if it was at what basically looked like a summer camp. Leon Kagarise took thousands of photos and recordings from New River Ranch (and nearby Sunset Park), capturing the image of a little white shed with a green roof and wooden stage, and planks sitting on cinder blocks for the seating. When there wasn’t enough seating, the people would sit on the ground or even the edge of the stage.

Washington, D.C. was actually the country music capital of the East Coast in the 1950s and early 1960s. Men and families had come from the South for work during and after World War II, and were eager to hear country music, whether it was at bars in D.C. or a park in northern Maryland. New River Ranch saw acts including the harmony-perfect Louvin Brothers, the pioneers of bluegrass Ralph Stanley and Bill Monroe, country music royalty June Carter and Johnny Cash, Texas troubadour Ernest Tubb, and many more. Today, New River Ranch is just a memory, but Kagarise’s photos showcase one of Maryland’s lost treasures in the book Pure Country.