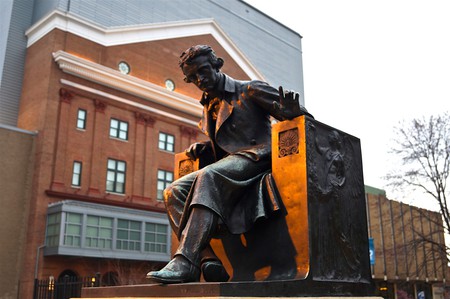 Baltimore may seem an unlikely book lover’s destination. But if you look closer, you’ll find the city has a long literary history that influences its culture to this day. From iconic writers, world-famous writing and English programs, to quirky book shops and festivals, Charm City has something for all types of book lovers.

You can’t talk about literary Baltimore without mentioning Edgar Allan Poe. The gothic writer and poet spent his early years in Baltimore and later died there under mysterious circumstances. The city continues to honor Poe by preserving the house where he lived from 1833–1835 as a museum, and by maintaining his memorial and original burial place in the Westminister Hall Burial Grounds. Not to mention, their football team is named after his most famous poem, “The Raven.”
Open In Google Maps
203 North Amity Street, Poppleton, Baltimore, Maryland, 21223, USA
+14104621763
Visit Website
Visit Facebook page
Give us feedback 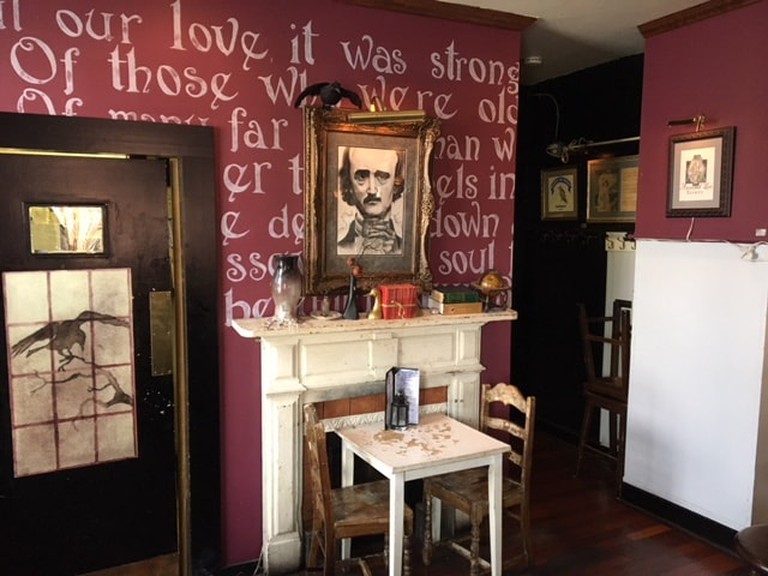 © Kurt Bragunier
If you really want to immerse yourself in Poe, check out the Annabel Lee Tavern in Canton. Named after his last poem, this late-night restaurant celebrates everything Poe and Baltimore, with dark fuchsia walls painted with verses straight from “Annabel Lee,” and, of course, lots of ravens.
Open In Google Maps
601 South Clinton Street, Canton, Baltimore, Maryland, 21224, USA
+14105222929
Visit Website
Visit Facebook page
Give us feedback

But Poe isn’t the only writer who called Baltimore home. The Jungle author Upton Sinclair and journalist H.L. Mencken were both natives of Baltimore. Other famous writers including F. Scott Fitzgerald, W.E.B. Du Bois, Dorothy Parker, Gertrude Stein and Zora Neale Hurston moved to Baltimore later in life and wrote some of their most powerful works there. You can stroll by some of their homes and other landmarks on a walking tour, such as the Maryland Humanities Literary Mount Vernon Walking Tour or the self-guided Literary Heritage in Baltimore tour.

While Baltimore’s best independent bookstores deserved articles of their own, we had to highlight these must-sees for any book lover’s trip to “The City that Reads.” 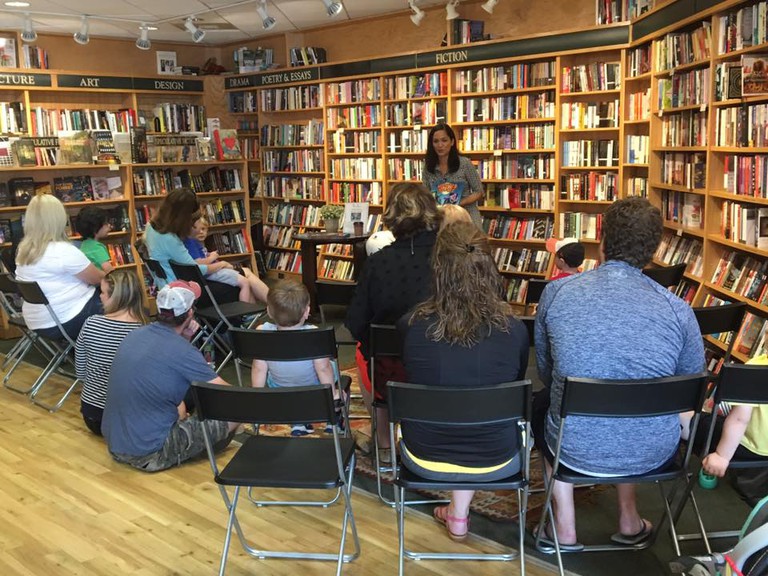 © The Ivy Bookshop
The official bookseller for the Baltimore Book Festival, The Ivy Bookshop is a central hub for the literary community of Baltimore. Partnered with multiple libraries, universities and nonprofits, the independent bookstore hosts over a dozen literary events each month, onsite and offsite.
Open In Google Maps
5928 Falls Road, Mount Washington, Baltimore, Maryland, 21209, USA
+14103772966
Visit Website
Visit Facebook page
Give us feedback

The Book Thing of Baltimore, Inc

Housed in an industrial warehouse in Waverly, this local treasure might be Baltimore’s best-kept secret. But it’s hard to call The Book Thing a “bookstore,” because the thousands of books stacked inside are all free! Patrons can take as many books as they want – all they ask is that the books are not resold. After a fire destroyed the nonprofit in 2016, the community rallied to repair and resupply what was lost, reopening in late 2017. 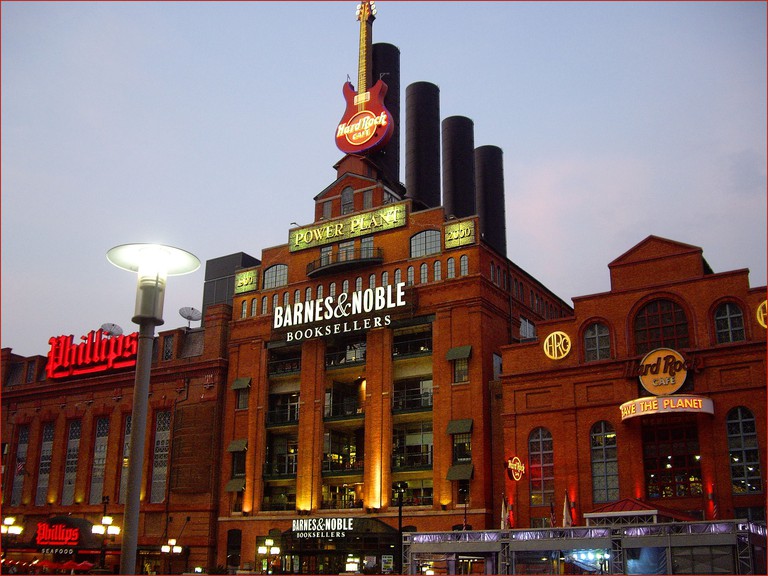 While Barnes & Noble Booksellers are all over the country, the Pratt Street location is worth a visit for book lovers. Built out of a landmark former power plant, much of the historic structure remains, with copper stacks and industrial piping running throughout. It also has a café, a large built-in fish tank (promoting the National Aquarium) and lovely views of the Inner Harbor from the second floor. 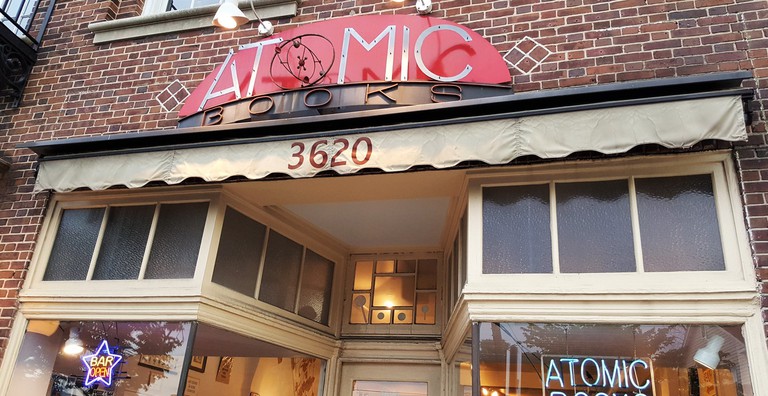 Courtesy of Atomic Books
Atomic Books has been a part of the funky Hampden neighborhood for over 20 years. With an assortment of niche books, graphic novels, magazines and more, everything is handpicked by the owners. Guests can find the Eightbar Cozy Bar & Lounge in the back of this bookstore, selling craft and local beers. (And P.S. – John Waters gets his fan mail delivered here.)
Open In Google Maps
3620 Falls Road, Hampden, Baltimore, Maryland, 21211, USA
+14106624444
Visit Website
Visit Facebook page
Give us feedback

Though readings and book events take place throughout the city, these events bring the best of literary Baltimore together in one place. 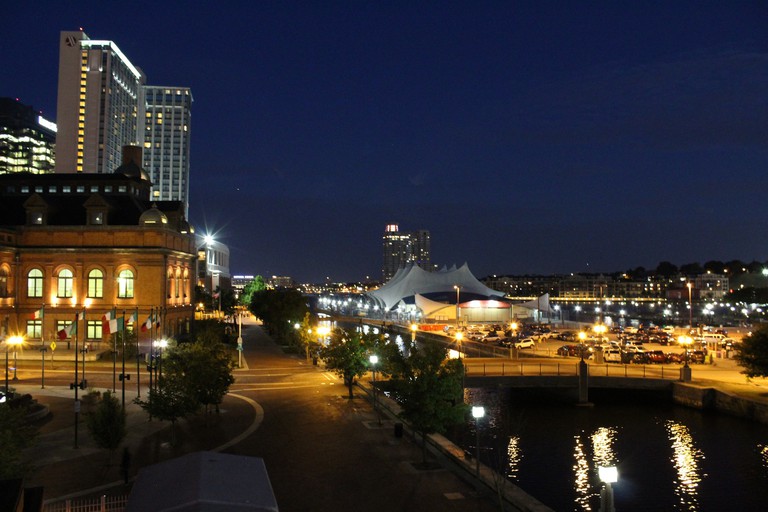 Baltimore Inner Harbor | © Nickel Lietzau / Flickr
Each September, the Inner Harbor hosts dozens of booksellers and exhibitors at the Baltimore Book Festival. As you walk along the water, you’ll find readings, signings and panel discussions with hundreds of local and nationally-known authors. They also have a children’s area with tons of fun activities. It’s a great way to get lost in books for the weekend.
Open In Google Maps
Inner Harbor, Baltimore, Maryland, USA
Give us feedback