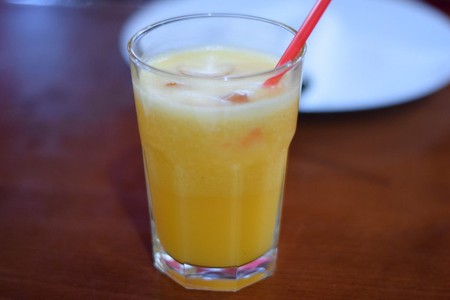 On dock bars and during happy hours in the summer all over Maryland, you’ll find a Crush. No, not the kind that might lead to a summer romance, but a boozy orange drink that is Maryland’s unofficial summer cocktail. Here are nine facts about the alcoholic beverage you must try this summer.

Orange Crush only has four ingredients

Ok, so it’s slightly more complicated to make an Orange Crush than a screwdriver, but the extra ingredients are worth it. Combine the juice from one orange (fresh is always better than bottled) with vodka and triple sec, and then top it off with a little bit of fizzy soda. Now, you’ve got a high-octane drink with a refreshing fizz and just enough orange to give it a bite.

Even though it’s only four ingredients, you can now buy it ready-made

A Crush is really simple to prepare, which makes it a favorite for bartenders slammed with bar dwellers on a summer day and popular to make at home or for your own summer get-together. But even though it’s so simple to make, you can now buy it ready-made. Seagram’s Escapes, fruity-flavored alcoholic drinks bottled and found in stores across the U.S., announced in spring 2018 the release of Ocean City Crush, inspired by the Maryland drink.

The drink was invented in Ocean City, Maryland

Although bartenders may have been creating this combination of ingredients to make this hot-weather cocktail for decades, the official birthplace of the Crush is Ocean City, Maryland. Ocean City is the go-to place to party in the summer in Maryland, and if you’re in the area, check out Harborside Bar & Grill, where bartenders claim to have created the Orange Crush in 1995. The restaurant offers all the seafood staples you’d expect in the area, but the waterfront view and deck bar are the real draws. Expect some real Maryland flavor in your experience.

If the Orange Crush were a person, it would be in the nascent stages of her alcohol-drinking experience. But in the 23 years since the drink was invented, it’s spread at an incredibly rapid rate and is now found at bars in Washington, D.C., Virginia, Maryland, and Delaware. If you can’t make it to Ocean City this summer, a bar in the mid-Atlantic will probably be serving the drink, including Duke’s Grocery in Dupont Circle.

The drink is also a staple for O’s pre-gaming

The Baltimore Orioles are a staple of summer in Maryland, and going to a game is a great excuse to get a Crush before you go to Camden Yards. If you’re in Baltimore, one of the best places to find a Crush is at Mama’s On the Half Shell in Canton. Mama’s on the Half Shell has an old tavern feel, but unfortunately, it isn’t on the water. It’s still worth visiting for the Crushes, and make sure to try the crab cakes and oysters while you’re there.

You shouldn’t go a summer in Maryland without drinking one

The rumor is that the Crush made its way to Baltimore around 2005. There’s something democratic and for-the-everyman that makes this drink have an old Maryland feeling, and you really shouldn’t go a summer in Maryland without drinking one (even if it’s just for the purpose of having said you’ve tried it).

This is a drink you can buy by the bucket-full

Is a pint-sized Crush not enough to get your summer party going? Well, then you’re in luck since lots of bars have started serving Crushes by the bucket-full. At Mike’s Crab House near Annapolis, enjoy long summer afternoons and beautiful views of the South River with a Crush.

Orange isn’t the only flavor

While the Orange Crush will always be the original (and possibly the favorite) version of the drink, lots of bars and restaurants have their own special spins on the cocktail. Blood orange and grapefruit are obvious citrus variants, but some bars also offer watermelon and basil or strawberry crushes. For different versions of this totally unpretentious drink, check out Hard Yacht Cafe. They have traditional orange, but also watermelon, peach, grapefruit, and lemon. They have a great regular American food menu and live music six nights a week.

Just one more reason to stop reading and get out to the bar is that Orange Crushes are very often a great happy hour special, which makes getting the refreshing summer drink affordable too.