The Netflix original series House of Cards has taken over the streets of Baltimore, shedding light on the city and its people. Kevin Spacey is frequently spotted in action around Bolton Hill, Canton, Harbor East, and Hampden. When not filming on location, the cast and crew are at their soundstage in Joppa, Maryland. There, they recreate the iconic West Wing of the White House, including the oval office, and other parts of the Nation’s Capitol. Here is a list of filming locations that are worth a visit if you are ever in Baltimore. 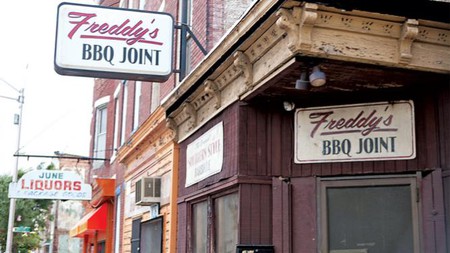 Many House of Cards fans would recognize Freddy’s BBQ Joint as Frank Underwood’s (Kevin Spacey) favorite place to enjoy early morning ribs and barbecue. Although its ribs may look authentic and delicious, unfortunately this restaurant is fictitious. In order to capture the true essence of Freddy’s BBQ Joint, the show rented a strip of buildings on Greenmount Ave, and used the abandoned buildings to film these scenes and set up Freddy’s BBQ Joint. If you find yourself craving barbecue after watching this scene, be sure to check out one of Baltimore’s best ribs joints at Chaps Pit Beef. This restaurant is famous for its barbecue, as it has been featured on shows, such as Diners, Drive-ins, and Dives, Man vs. Food, and The Best Thing I Ever Ate.

The Four Seasons Hotel Restaurant, located in Harbor East, has made multiple appearances in the series. Wit & Wisdom is often used for Frank’s important lunch meetings and the hatching of his political schemes. It’s no surprise that when not on the big screen, Wit & Wisdom is buzzing with hotel guests and locals dining from all over Baltimore. This restaurant was featured in Baltimore Magazine’s ’50 Best Restaurants’ as its menu holds a unique combination of ‘comfort food with a contemporary Eastern Seaboard twist.

Werner’s Diner is a prime location for Underwood and his associates, often serving as a site for late night meetings and political power breakfasts. The series helped to restore Werner’s Diner, as it was closed for a long period of time prior to the show. Production Designer for the show, Steve Arnold, said, ‘right about the time we decided we were interested [in shooting it], somebody had control of it and decided to reopen it. Their opening day was a little bit after we needed it, so we came in and did some cleaning and restoration. And then they opened about a month after we shot there. It’s a great, classic, old-school, downtown diner.’ The series helped bring the restaurant back to life, bringing in new amenities and new customers.

Frank meets Zoe at the BMA when exchanging secret information incognito. The one piece of art shown in the scene is Thomas Eakins’ 1872 painting of The Biglin Brothers Racing. This painting actually lives in Washington D.C., yet the show gained copyrights to use it in this scene. Its appearance in House of Cards is not the only reason to visit this one of a kind gallery, as it is both family friendly and filled with fantastic pieces of artwork. The BMA is ‘home to an internationally renowned collection of 19th-century, modern, and contemporary art. Founded in 1914 with a single painting, the BMA today has 95,000 works of art—including the largest holding of works by Henri Matisse in the world.
Open In Google Maps
10 Art Museum Drive, Johns-Hopkins - Homewood, Baltimore, Maryland, 21218, USA
+14435731700
Visit Website
Visit Facebook page
Give us feedback

In season two of the series, Doug Stamper (Michael Kelly) visits Xander Feng in Beijing. Don’t be fooled by the magnificence of the scenery, for it is not actually shot in Beijing, but in Harford County’s beautiful Ladew Topiary Gardens. According to their website, ‘Ladew Topiary Gardens is a nonprofit, organization whose mission is ‘to maintain and promote the gardens, house and facilities in keeping with the creative spirit of Harvey S. Ladew for the public benefit and for educational, scientific and cultural pursuits.’’ The gardens rich historical background and cultural significance makes it the perfect venue for a political thriller such as House of Cards.

Every Baltimorean knows how fun an afternoon at Camden Yards can be. Those watching season two of House of Cards got a taste of the experience. Newly elected VP, Frank Underwood, throws the first pitch at an Orioles baseball game. This scene was put together by a little behind the scenes movie magic. The part of the scene where Frank Underwood throws the first pitch was not filmed during a real Orioles game. However, shots of the crowd watching the game were filmed on a different day, during a real game. Later these two shots were edited together to make the baseball scene. The fans genuine enthusiasm in these shots gives the scene authenticity and shows what a real Orioles game is all about.
Oriole Park at Camden Yards, 333 W Camden St Baltimore, MD, USA, +1 510 685 9800
By Eleni Sabracos