The True Story of How Maine Got Its Desert 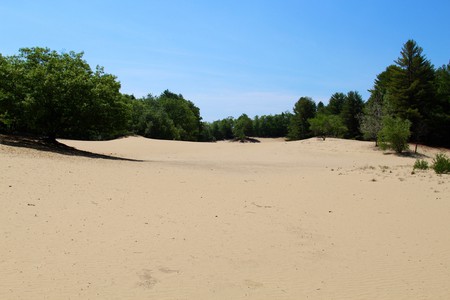 Discovering a desert in Maine gives most people pause, akin to the feeling of finding out that your childhood hero has a hidden crooked side. Where in this lush, green state is a desert? How did it get there? And why hasn’t vegetation grown over it? Here’s the true story of Maine’s desert.

Tucked away in the town of Freeport, better known for its outlet shopping and coastline, is a 40-something-acre patch of golden brown sand and silt that became known as the Desert of Maine, almost 100 years ago. As definitions go, “desert” isn’t the correct term to describe Maine. The state doesn’t have a real desert—it gets too much precipitation for that. Nonetheless, it has rolling dunes that weren’t trucked in to create a kitschy attraction. So how did it get there?

The desert, which attracts tens of thousands of visitors each year, owes its origins to nature, with a little help from man. In the last ice age, glaciers covered Maine, grinding rocks into pebbles and pebbles into sand or glacial silt as they receded. 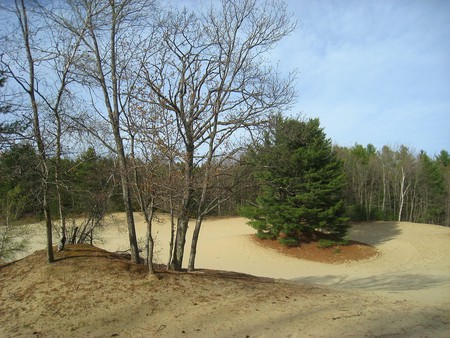 Topsoil grew over the sand, and eventually, farmers, attracted by the region’s fertility, began cutting down trees for the booming shipbuilding industry, followed by large agricultural farms starting in the late 1700s.

Such was the 300-acre farm purchased by William Tuttle in 1797. And, at first, everything went as planned: the Tuttles had a successful produce farm and grazed sheep on the land, selling the wool to the booming textile mills.

But a couple of things happened. First, cattle are hard on the land, and they began to pull up the roots of plants, leading to soil erosion. Such was the case when, one day, a dinner-size plate of sand was exposed. Second, the family didn’t rotate their crops as they should have, causing the soil to lose nutrients. The rest was inevitable: despite fighting it, the sand beneath grew, swallowing the pasture and nearby structures. The desert continued to expand, and the Tuttles left. 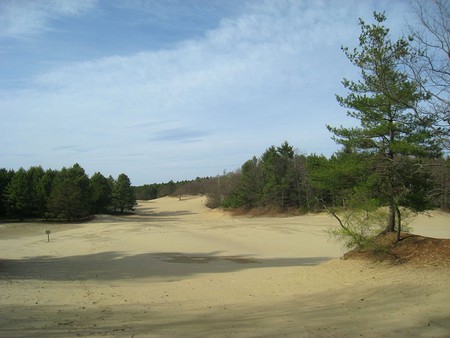 In 1919, Henry Goldrup bought the farm for $300, and six years later, he opened a tourist attraction, which is still open today. Visitors can take a 30-minute guided tour, hike on trails, or wander off alone through the sand.

Attempts to negotiate with the desert over the years have proven futile. A spring house, built in 1935, now sits beneath eight feet (2.4 meters) of sand. Some pine trees have adapted, and their tops sprout above the sand—while their trunks delve some 50 feet (15.2 meters) below.

The current owners bought the desert in the 1980s, and they have since set up a gift shop, campground, and antiques museum for the curious. And to complete the incongruities, there’s even a butterfly room.