The Most Spectacular Places to Cycle in Maine 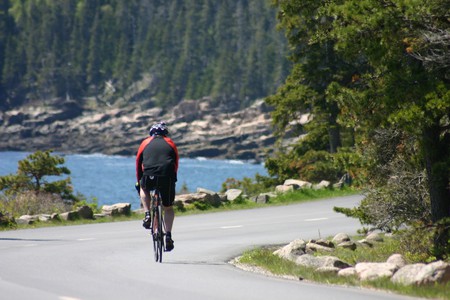 Siteseeing on a bicycle in Acadia National Park | © Jean Beaufort/PublicDomainPictures

Maine is wildly popular with cyclists drawn to its quiet back roads, scenic coastal routes and residents eager to share the road. Whether you want flat bike-friendly paths along the water or the challenge of cresting the state’s western mountains, there’s a cycling route for everyone. Here are some of the state’s most scenic rides.

Cycling enthusiasts will think Acadia National Park, set on Mount Desert Island in Downeast Maine, rose from the seas just for their use. The park boasts 45 miles of Carriage Roads winding over bridges and by ponds through some of the park’s most spectacular scenery. The roads are closed to cars, and feature wide, well-groomed surfaces of crushed rock. For those who want to see the sea there’s 27 miles of the Park Loop Road, a two-lane, one-way road that winds through the park’s most famous sights, including Precipice, Thunder Hole, Otter Cliffs and Cadillac Mountain.

Siteseeing on a bicycle in Acadia National Park | © Jean Beaufort/PublicDomainPictures

Maine’s most populous city also has one of its best urban cycling routes. This 3.6-mile loop is one of the oldest and most popular cycling routes in Portland, offering great views of the skyline or sunsets over Casco Bay. The area is mostly flat and cyclists share the path with runners, walkers and dogs. There are nearby cycle shops, like CycleMania, which rent bikes. 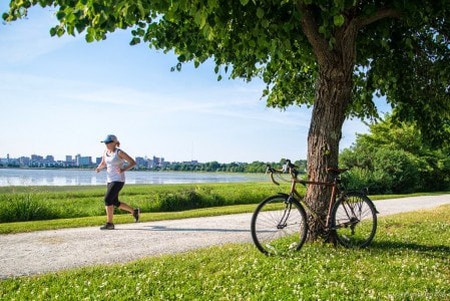 If you’re into mountain biking or cycling on a fat tire bike, Bradbury Mountain State Park offers miles of inland wooded trails with various degrees of difficulty. Not far north of Portland and just a short drive from Freeport, the park caters to experienced bikers enlivened by the idea of obstacles and sharp corners. Whether it’s due to the fact that the “mountain” – just 500 feet – is short or that there are no bodies of water, the crowds tend to be smaller here, making it perfect for cyclists. Avoid the boundary trail, which is impossible to ride.

In the far reaches of northern Maine, this former rail bed has been converted into a 28-mile crushed-stone pathway. Located deep in the woods and once used to haul potatoes to market, the pathway runs between Presque Isle and the small town of New Sweden, and also connects to the 61-mile Bangor-Aroostock Trail. Be on the lookout for ATVs and moose, which have been known to use the trail.

Stretching 87-miles through some of the most stunning, out-of-the way trails in Maine, this bike path connects Ellsworth (Acadia’s front door) with Ayers Junction in eastern Maine, often hugging the coast and offering ocean vistas. Along the way you’ll pass streams teaming with salmon, mountains, dense forests and rocky shores. The trail follows the former Maine Central Railroad, which once hauled goods, like blueberries, south.

#TBT to fourwheeling down the sunrise trial, such an awesome view from it! #Maine #SunriseTrail