The 10 Best Lobster Restaurants In Maine

Pile of lobsters | © Chloe Media/Flickr
Whether you prefer metal crackers and a bib or silverware and white porcelain, Maine restaurants serve up the state’s famous bottom-dwellers with ceremony and flair. Take a seat on the wharf with a local brew, vats of melted butter and a lobster so fresh you saw its antennae curl as it hit boiling water. We discover ten top places that make Maine lobster renowned for being the best in the world.
Live lobster © Neon Tommy/Flickr

Restaurant, Seafood, $$$
Scallop and lobster stew | © stu_spivack/Flickr
‘Eat in or take out cooked or alive’. Young’s Lobster Pound gives you options. The restaurant overlooks the Penobscot Bay and has docking for your boat, with both an inside dining room and an outside deck. Young’s encourages guests to bring their own beer, wine, and appetisers and even dinner for those who don’t like seafood. For the lobster-enthusiasts however, the ‘Shore Dinner’ comes with a large steamed lobster, clams, potato chips, butter, corn on the cob or coleslaw and your choice of lobster stew, fish chowder, or clam chowder. If that seems like too much, select a lobster from their tank and choose your sides á la carte.
More Info
Open In Google Maps
2 Fairview Street, Belfast, Maine, 4915, USA
+12073381160
View menu
Visit website
Visit Facebook page
Send an Email
Give us feedback

Restaurant, Seafood, $$$
Twin hardshell lobster | © Masayuki (Yuki) Kawagishi/Flickr
Operated by a local fishermen’s cooperative in mid-coast Maine, this restaurant steams fresh lobsters as they arrive off local boats. Pemaquid Lobster Co-op is located on a hill that slopes down to Pemaquid Harbor and if you come by boat, you can tie up on the restaurant’s temporary floats. The co-op has outdoor seating at picnic tables, as well as a covered pavilion. Bring your own beer or wine for a festive lobster dinner with friends. First-timers should try one of several versions of the ‘lobster shore dinner’ comprised of your choice of a softshell or hardshell lobster, corn on the cob, fresh steamers, coleslaw, a roll and melted butter.
More Info
Open In Google Maps
32 Co-Op Road, Bristol, Maine, 4558, USA
+12076772642
View menu
Visit website
Visit Facebook page
Send an Email
Give us feedback

Perhaps the most famous spot in Maine for lobster rolls, Red’s Eats’ red and white striped shack has received national acclaim for many years running. A favorite of tourists and certainly some locals, Red’s Eats is located on the scenic Sheepscot River in Wiscassett. Whilst it is a convenient lunch spot for anyone making their way along the coastal Route One, be prepared for long lines. Red’s classic lobster roll appears at the shack window with heaping claw and tail meat and extra mayo and butter on the side if so desired. 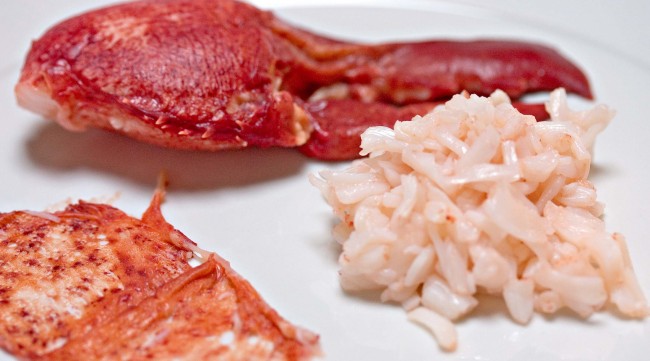 Restaurant, Seafood, $$$
Tank lobster | © Eugene Kim/Flickr
The cafeteria-style Shaw’s Fish and Lobster Wharf, overlooking New Harbor, serves fresh steamed lobsters from traps hauled to shore just feet away. The ferry from Monhegan Island docks next door, so Shaw’s is the perfect spot for hungry day-trippers. Before climbing the stairs to the restaurant, stop by Shaw’s open tanks to view clambering live lobsters or to select one for dinner. The ‘Single Lobster Dinner’ comes with drawn butter, salad, a roll, and a steamed lobster. Sit outside on the patio to enjoy a view of the harbor or to watch lobstermen unload their catch at the pier below.
More Info
Open In Google Maps
129 Maine 32, New Harbor, Bristol, Maine, 4554, USA
+12076772200
View menu
Visit website
Visit Facebook page
Send an Email
Give us feedback

Restaurant, Seafood, $$$
A chef prepares lobster diavolo | © Ralph Daily/Flickr
Street and Co. is nestled between establishments on a narrow cobblestoned lane in Portland’s historic ‘Old Port.’ Its brick interior is rustic and chic and the kitchen serves up garlicky grilled seafood and pasta dishes that echo the restaurant’s ambiance. In the summertime you can enjoy hors d’oeuvres or dinner enjoyed on outdoor seating on the street, and one third of the restaurant is always reserved for walk-ins. Try ‘grilled lobster on linguine, butter, and garlic’ or the house specialty for two, lobster diavolo – linguine in a spicy sauce topped with mussels, clams, calamari, and a whole lobster sliced down the middle.
More Info
Open In Google Maps
33 Wharf Street, Old Port, Portland, Maine, 4101, USA
+12077750887
View menu
Visit website
Visit Facebook page
Send an Email
Give us feedback