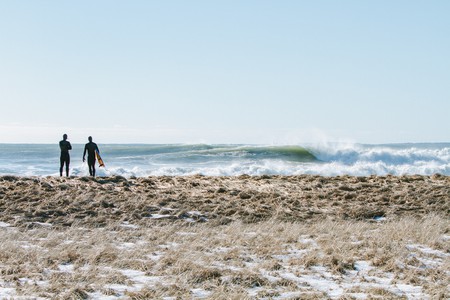 In the last few years Maine surfer and Portland resident Thomas Cunningham has been asking himself, “It’s so fucking cold, so why is it so crowded?” As long as Maine residents have surfed they have ventured out in the winter. Local lore tells of surfers in the late 1960s wearing wool sweaters over their board shorts, surfing in shifts, and taking turns tending to a fire on the beach to keep warm. But winter surfing isn’t the same ritual of masochism it used to be and as the sport regains popularity in Maine, increasing numbers of surfers are paddling out in the cold.

Andy McDermott, owner of Black Point Surf Shop and head shaper at McDermott Shapes, has an answer to the question.

“Ten years ago on a good winter swell you’d get maybe 6-7 guys out, now it’ll be 20,” McDermott said. “You can blame wetsuits for that; they’re so much more flexible and warm and they make them in a million sizes.”

Winter wetsuits are between 5-7 millimeters thick around the wearer’s core and can weigh up to 15 pounds when wet. Getting into one feels like climbing into the skin of an adult seal. Adding flexibility while retaining warmth allows surfers to paddle around with relative ease. The suits have also become less expensive encouraging companies to offer a range of sizes so surfers of all shapes can tolerate the harsh winter conditions. 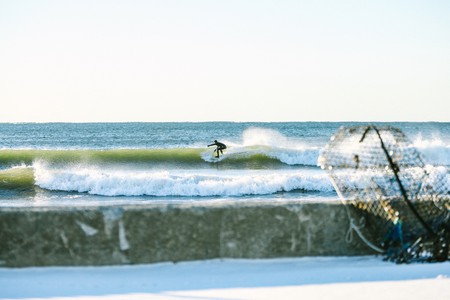 Alongside wetsuits, online wave forecasting tools and beach cameras make it much easier for surfers to predict conditions. Despite these advancements, winter surfing remains brutally cold.

“In surfing you’re in the liquid medium which is so directly experiential it’s like you’re swimming through winter,” Cunningham said.

The in-shore winter water temperature in the Gulf of Maine hovers around 40 degrees but the real cold comes after the surf session when numb and useless fingers try to peel wet neoprene off of bare skin in air that frequently dips to 0 degrees. Cunningham resorts to changing into and out of his wetsuit at home, sometimes driving upwards of an hour still wearing the soaked wetsuit, car heater on full blast.

“Every time I got caught inside it was like being punched in the face over and over again because the water was so cold,” Prawer said. “I remember there were definitely a handful of times where I was like, ‘I’m gonna get hypothermia and die,’ and I imagine every surfer has that experience.”

Some surfers said the quality of waves in the winter is worth the discomfort. McDermott said “when it’s cold and choppy and gnarly it isn’t fun for everybody,” but surfers who want the best waves just get “the gear and get out there” no matter what the weather is like.

Prawer echoes the sentiment, saying he surfs until he can’t feel his fingers and toes because being able to be out there can be “the difference between having maybe the best session of your life, and having no waves at all.” 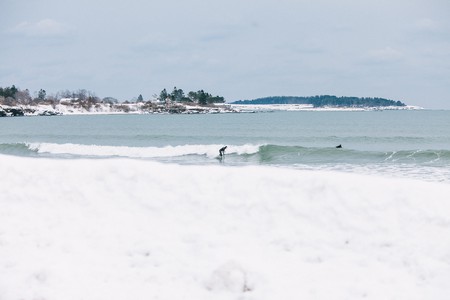 There’s a certain frame of mind that winter surfing creates which goes beyond the typical surfer’s wave obsession. Winter intensifies surfing’s emotional component, expanding the perceived distance between the surfer’s everyday life and their surfing life.

“You’re so consumed by the surf-hero narrative that you’ve reached a different kind of psychology,” Cunningham said.

Cecily Pingree was born and raised on North Haven island in the wave-less Penobscot Bay. She started surfing while in college in Oregon because it fit in with snowboarding and skateboarding. Pingree had no idea people surfed in Maine until one of her close friends married a surfer nearly 10 years later. Getting to any surf break from her island requires a 70-minute ferry trip and at least an hour of driving.

“I’ve never been in a place where I could just get out and surf everyday and if I’d been totally obsessed with surfing in my 20s I’d have moved to California,” Pingree said. “… I’m a jock at heart but it’s a head thing, mentally based, something that pushes the other limits of your body.”

Pingree is no stranger to the cold water. She swims between islands in the winter and still surfs when the temperatures drop.

“What I really like is getting out there in no man’s land, where there are all these other elements [the cold, currents, waves] and you have to keep yourself alive,” she said. “People say, ‘You’re insane,’ and I’m like ‘No, not technically.’… I’m looking to be in a space for a certain period of time where my body is getting exposure to something else.” 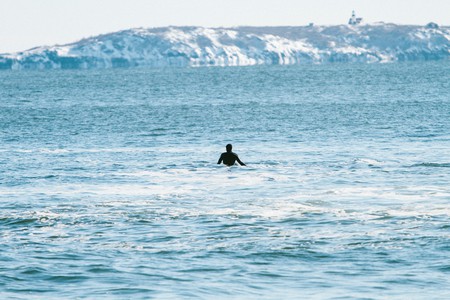 The feeling of being out there underlies most explanations of winter surfing’s attraction. Cunningham relates surfing to graffiti or fighting, an act that’s not necessarily permissible.

“I was surfing a remote spot in February and I didn’t get that many good waves but it was crazy out, then I just went to work after,” he said. “Like I was living this intense drama then I went and did data analysis. … The loneliness (on the water) is so much more intense; the smallness so much more obvious in the winter, almost Baroque.”

Winter reminds surfers they can’t stay in the ocean forever. Cunningham sums up a feeling most surfers who live through long winters, especially in Maine, share.