The Best Places to Eat Oysters in Maine 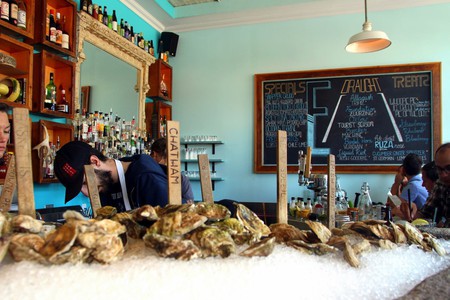 Think you know oysters? Whether your preference sways to Bagaduce or more toward Glidden Point, Maine’s offerings can leave even the pickiest connoisseurs feeling satisfied. But if you’re just looking for some advice to dip your toe into the world of oysters, we’ve prepared a guide on the types—and places—to try them in the Pine Tree State.

First, it’s helpful to know the flavors. Maine has numerous oyster types depending on where you are on the coast, so let’s start with the more commontypes you’re likely to see at the raw bar (we make no allowances for oysters from our southerly neighbors, which are just fine but, commonly, miss the point). 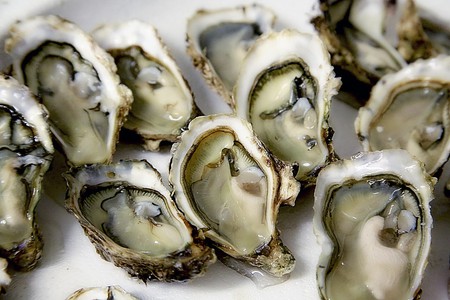 Bagaduce: Raised in cultures suspended near the Bagaduce River, these smallish, pearly-white shells get their shine from the strong tidal waves that cause a stir, keeping them exposed to the sun. These creamy oysters taste of the fresh sea, neither too sweet or salty.

Belon: Growing wild (many oysters are planted, in effect) on the hard, rocky bottom of the Damariscotta River, these small, deeply cupped (oyster-expert talk for the depth and shape of the shell) oysters are hand-picked by daring divers. Also known as European flat oysters, they are known for their copper bite, low salinity, and creamy finish.

Basket Island: This family-run oyster variety gets its name from the small Casco Bay island where the crustaceans are harvested near. Small and sweet, the oysters are a hit with locals.

Glidden Point: This big oyster is a Maine standard, getting its buttery, soft character from the Damariscotta River.

Pemaquid: Clean and delicious, these bivalves are a Maine standard.

Winter Point: Briny and slightly sweet, these oysters come from the midcoast and are a specialty at most restaurants. 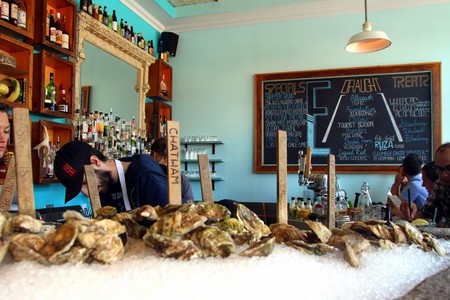 After you’ve jotted those down on your flashcards, you’re ready to feast. With miles of coastline, rocky harbors, and willing fisherman, Maine doesn’t lack of shore-side shacks worth a schlepp for oysters. Let’s start south and move north, moving as the oysters grow.

Even if oysters repulse you (and we’re confused how you end up on this page), Eventide Oyster Co. in Portland’s Old Port is a must-visit. With the likes of lobster rolls, fried spuds and sides, classy cocktails, and an eye on the latest trends in craft beer, it’s a perfect marriage between fresh shellfish and drink. Every morning, oysters from all around the state and New England are delivered here fresh. And even if you forgot every word of sage advice imparted in the first section of this guide, the friendly staff can meet the gaps in your knowledge. Bottoms up.

Maine’s restaurant scene changes fast, but the recipe at Scales—fresh, farm and imaginative—seems to be a success. Don’t let the hipness of the place fool you: Scales is serious about its food, all the way down to its bottom feeders. Oysters here ($15 for a half dozen, $29 for a dozen) come as decorated or raw as you prefer, with house cocktail sauce, seafood mignonette (garlic, shallots, vinegar, and pepper, typically) and lemon.

Don’t let the long traffic line fool you: Damariscotta is an authentic town, its docks and piers frequented as often by fishermen headed to work to feed the tourists falling in hours later. Downtown’s brick landscape doesn’t get better than at King Eider’s Pub, a classic mainstay that serves up some of Maine’s best oysters. There are three options on the restaurant’s website: the menu, the beer, and just “oysters.” They come fresh, every which way, with specials like “Connor & the Gang,” which is three oysters or three clams and Guinness.

Think Pemaquid oysters—fresh, salty, and served with condiments galore—every day, all the time. Three Tides in Belfast is famous (it holds an annual festival for oysters) for its catch, thanks to the close presence of tidal estuaries whose salinity keeps the oysters from growing too salty and imparts a unique, mineral and cream flavor. You can’t miss the man-high midden in the middle of the dockside restaurant, whose appeal grows once you discover Marshall Wharf Brewing Company just below your feet.

You never need a reason to visit quaint Stonington, with its picturesque harbor. Married to the maritime, there’s much to do here (or not), and we recommended refueling at Aragosta, where seafood is respected, but innovative. Oysters here come fresh or roasted from nearby tidal rivers and inlets. They taste like the view over the harbor: fresh, salty, and crisp.