10 Unusual Things to Do and See in Maine

International Cryptozoology Museum | © Rain0975/Flickr
Rural isolation, aside from being the premise of horror movies, means that Mainers often have time on their hands. Couple that with a seasonal influx of tourists and, well there’s no shortage of oddities along the roadside. Whether they’re building giant Yetis, axemen, globes, or blueberries, Maine stands shoulder-to-shoulder with any state in unique and interesting roadside attractions. Here are a few of our favorites.

Museum
International Cryptozoology Museum | © Rain0975/Flickr
Laying claim to the title as the world’s only International Cryptozoology Museum (cryptids, as you recall, are animals the scientific community deems made up—i.e. monsters), the specimens here “go way beyond Nessi and Bigfoot.” There’s the Montauk Monster and the New Jersey devil, a life-size coelacanth (a big, primitive fish thought to have gone extinct) and a replica of P. T. Barnum’s Feejee Mermaid. For the price of admission you can see trout covered in mink-like fur, footprints, and rabbits with horns. The museum has a light tone, and the owner is enthusiastic.
More Info
Open In Google Maps
STE 106 Road, Thompsons Point, Portland, Maine, 4102, USA
View menu
Visit website
Visit Facebook page
Send an Email
Give us feedback

The gate has gargoyles, which is the least you’d expect of the mansion belonging to the master of modern horror. Stephen King is a Maine native, and has called this beautiful (and creepy) mansion in a quaint Bangor neighborhood home for years (he also lives in western Maine, where he owns a bucolic orchard). His association with the city where he wrote many of his books draws plenty of visitors who, looking closely at that gate, will see spiders and lizards. 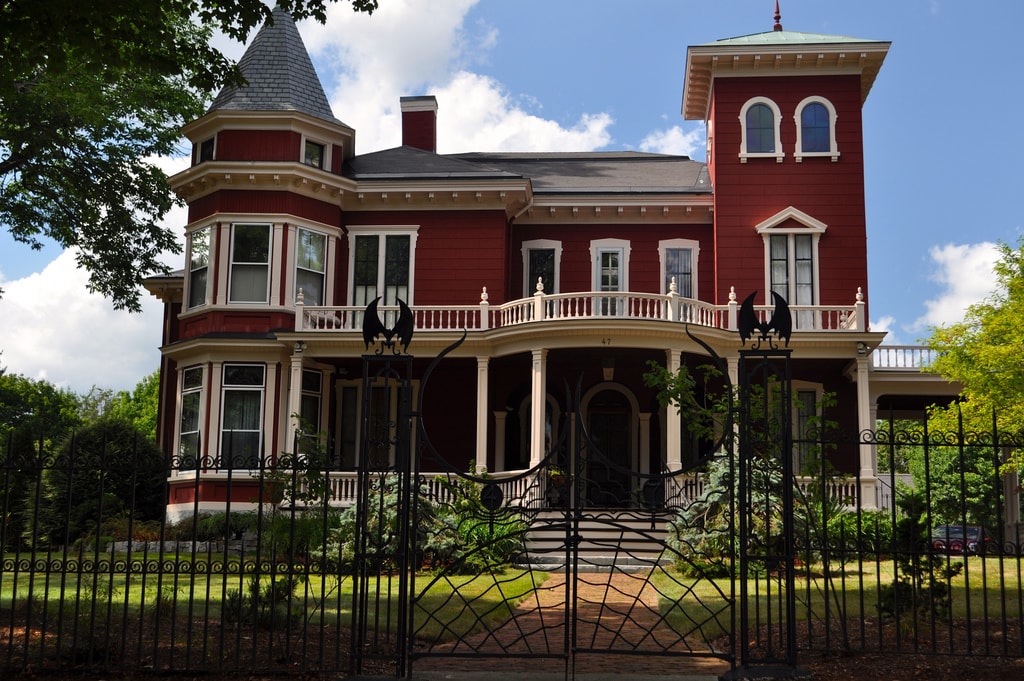 The Desert of Maine

One of the greenest states in the country has one of its smallest deserts. This 40-acre patch of sand silt—not a dry desert owing to the fact that it receives an abundant amount of rain, hence the encroaching trees—was deposited by receding glaciers and uncovered by poor farming practices around the turn of the last century. Now a tourist site in coastal Freeport, the Desert of Maine draws thousands of visitors every year to see the curiosity. 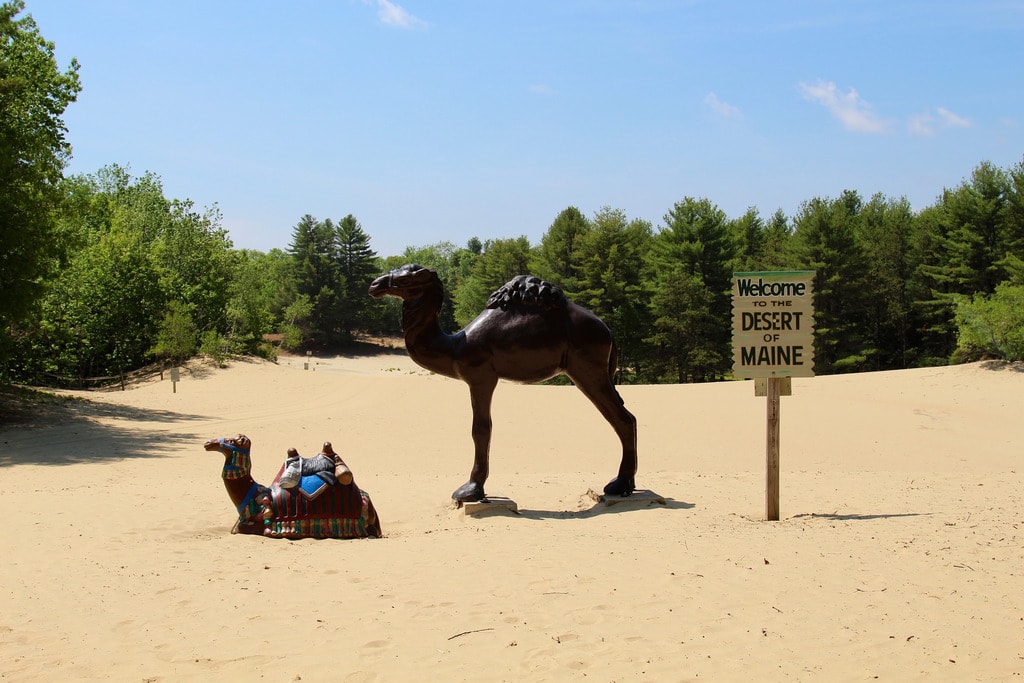 Mary Nasson’s life has become the thing of legend. A herbalist, she died at just 29, and is remembered in a love epitaph on her grave. But that hasn’t stopped local legend from growing up around her. According to popular yarns, the slab of stone placed over her grave was to keep Nasson, a witch, from rising from the dead. That historians say otherwise (stones were planted to keep cattle off) hasn’t stopped tales of her reputation as a witch from spreading. Mary was an effective healer, and could reportedly exorcise demons. Neighbors thought she used magic. Further stories say her grave emanates heat, and draws flocks of crows. Whatever the truth, the York Witch Grave certainly draws tourists.

Paid a visit to the grave of Mary Nasson, York's alleged "witch's grave" — Mary was actually an herbalist who died in 1774 at the young age of 29. The carving on the headstone is really unique. #yorkME #marynasson #grave #tombstone #Maine

Western Maine was settled by immigrants, who left their mark on the area by naming the towns after their ancestral homes. Many of these were Scandinavian loggers still remembered by the Finnish American Heritage Society in West Paris. Other names came from independence movements (Peru and Mexico) naval battles (Denmark) and simple clerical errors (Norway). Not knowing any of that, of course, you’re forgiven for thinking you entered a weird wormhole where distance was a time-dimensional construct. The real answer is pragmatic: tourism. The sign was erected in the 1930s, and although it hasn’t included all contenders (Moscow, Belfast, York, and Vienna, to name a few) it remains a popular place for a photo.

At 1:93,000,000 scale, you can travel the length of the solar system in just 40 miles at the Maine Solar System Model. Up north in Aroostook County (just “The County”), students have collaborated with a local university to build a planetary model of the solar system along a rural highway. The planets (and Pluto) pop up in fun places: the Sun passes through the Northern Maine Museum of Science. Mercury is above a garden. Venus sits just off the parking lot of a motor inn. The home of humans is in a used car dealership.

If blueberries are religion in Maine, is this a high temple to the fruit? Located off Route 1 in Columbia Falls (on the way to Acadia National Park), Dell and Marie Emerson, blueberry farmers for 53 years, built Wild Blueberry Land in 2001 to celebrate the state fruit. In addition to pies, pints, and jams, the Emersons also sell jellies, sauces, and vinegars fresh every day. When a newspaper reporter once suggested it was a tourist trap, the farmers had a reply: “Not when you look at our prices.” 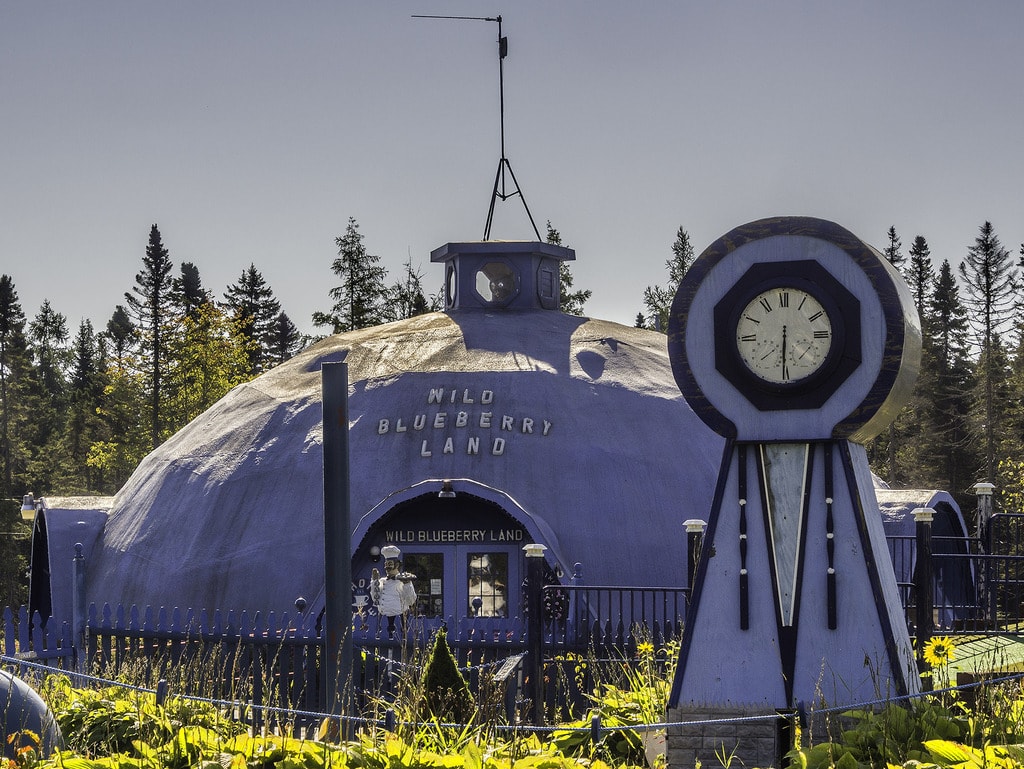 Several places claim to be the home of Paul Bunyan. Bangor, a city built on the back of lumber, has tried to outdo them all by erecting a 31-foot tall, 3,700-pound statue of Mr. Charming. Dressed in flannel, with an axe in one hand, and a peavy (a tool to hook and move a log) in the other, the statue was donated to Bangor in 1959, and now overlooks a casino on the outskirts of the city’s downtown.
Paul Bunyan Statue, 519 Main St, Bangor, ME, USA, +1 207 947 0307 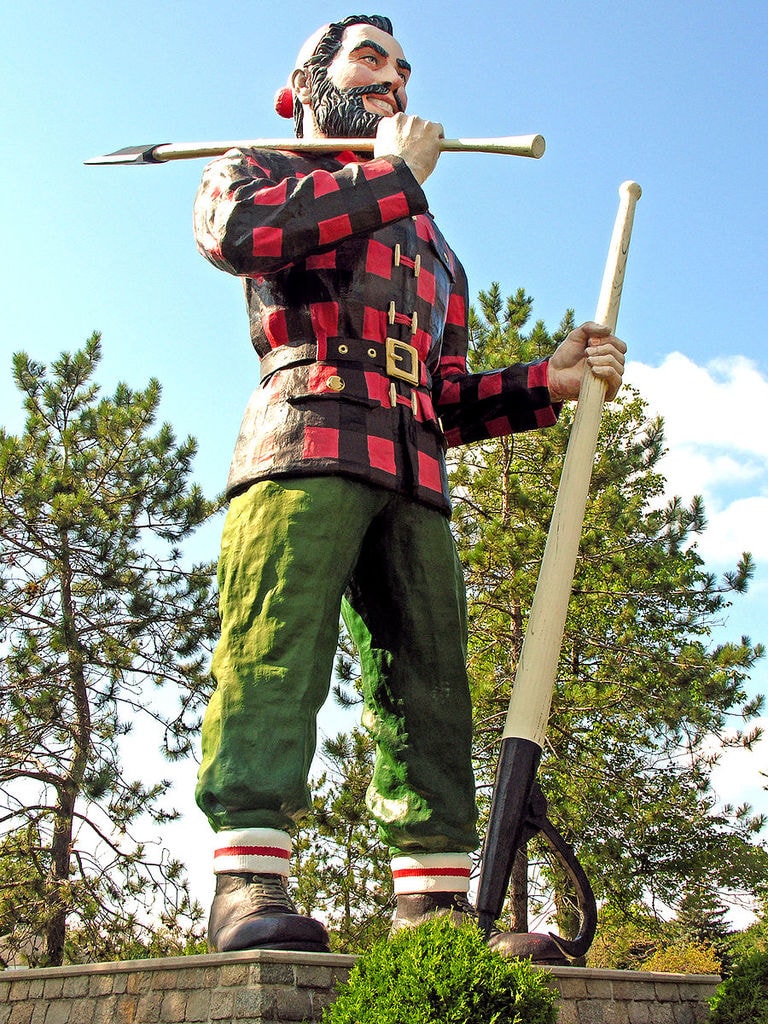 You can just imagine how large the normal pan is. Every July for the Pittsfield Egg Festival, town officials crack this 10-foot, 300-pound pan out of storage and start frying eggs (the burners, as you might have guessed, are custom-made). Made for this mid-Maine town in 1973, the frying pan is just one of several egg-themed events at the festival, which includes an Early Bird Breakfast, chicken barbecue, and “Egglympics.”

So popular is this attraction that when Garmin bought and closed the former DeLorme store in 2016, they kept this enormous, 131-foot globe open to the public. Eartha is the world’s largest globe, and mimics Earth’s movements, albeit at a slightly faster rotation of 18 minutes. 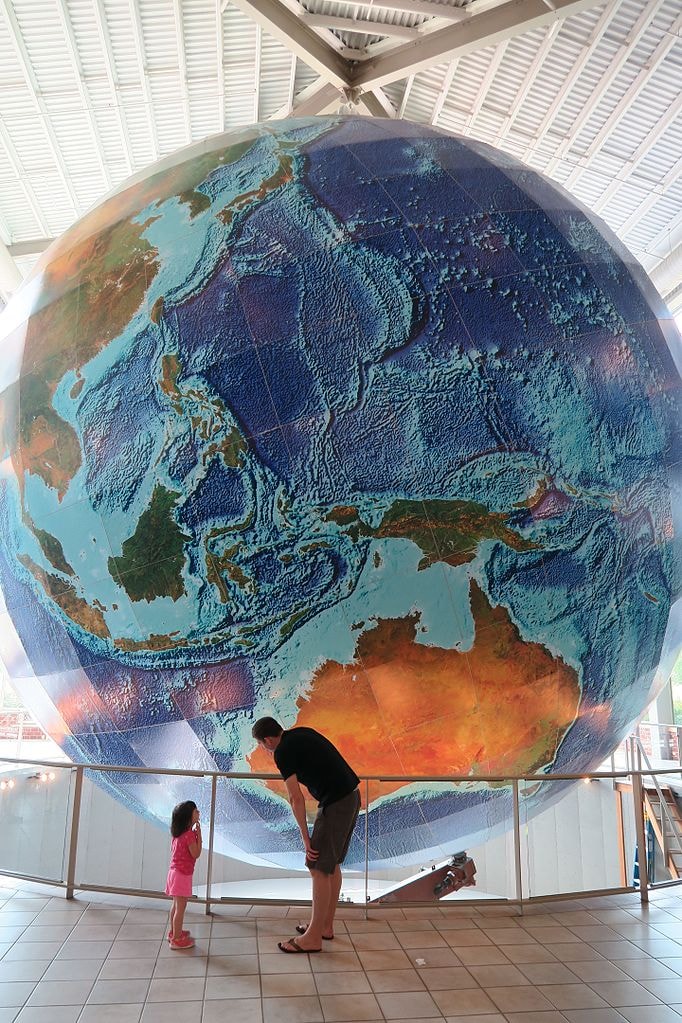