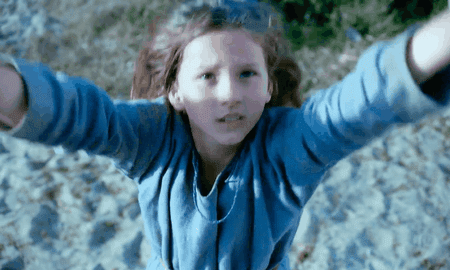 "Jeannette: The Childhood of Joan of Arc" © KimStim

A new film about Joan of Arc—directed by French agent provocateur Bruno Dumont—takes the metal from Joan’s armor and puts it into her ears.

Ageing from eight to 19 in Bruno Dumont’s Jeannette: The Childhood of Joan of Arc, the future Maid of Orléans demonstrates her passion for agonizing about God, damnation, and redemption while consistently freaking out to death metal. Untempted by New Wave, grunge, or boy band pop, and certainly not by church music, she is a headbanger par excellence. Some of her foot dancing has a road drill quality—like a punk pogo that never gets off the ground. Or it could be a bad Irish jig. 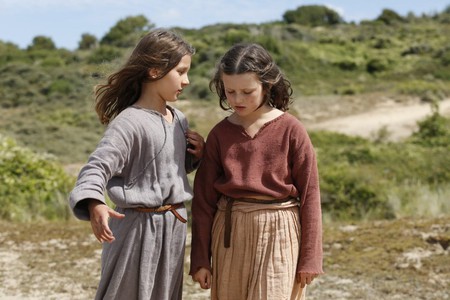 Jeanne (Lise Leplat Prudhomme) and her friend Hauviette (Lucille Gauthier) in Jeannette: The Childhood of Joan of Arc | © KimStim

Based on Charles Péguy’s play The Mystery of the Charity of Joan of Arc (1910) and set firmly in the early 15th century, Dumont’s movie was scored by the French musician Igorrr. His sound contains elements of folk and flamenco, while the songs spontaneously sung by Lise Leplat Prudhomme (the child Jeannette/Jeanne) and Jeanne Voisin (Jeanne as a teenager) have a pastoral lilt befitting the heroine’s early life as a shepherdess in the upper Meuse Valley. These tunes’ climaxing in blasts of metal denotes Jeanne’s moments of religious ecstasy.

Jeannette is Dumont’s tenth feature (if his 2014 miniseries P’tit Quinquin is included) and one of his more brashly experimental. A grand guignol comedy with young actors that announced a shift from his bleak, explicit early work, Quinquin was followed by the equally grisly, Pythonesque Slack Bay (2017). The absence of sex and violence from Jeannette suggests the 60-year-old enfant terrible is continuing to mellow, though the film’s undercutting of Joan of Arc’s sanctifying mythology resonates with the anti-dogma thrust of Dumont’s The Life of Jesus (1997), Hadewijch (2009), and Hors Satan (2011). 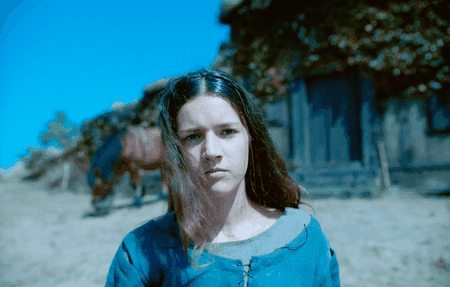 Teenage Jeanne (Jeanne Voisin) in Jeannette: The Childhood of Joan of Arc | © KimStim

Visually and thematically, Jeannette is especially reminiscent of Dumont’s Camille Claudel 1915 (2013). Not only do the films share a rural spareness—the rocky hills surrounding Claudel’s Avignon asylum are echoed in the sandy places where Jeanne sings and dances—but their heroines can only grasp at salvation, whether through faith in art or God.

Claudel (Juliette Binoche), a mostly rational woman who was cruelly institutionalized by her family and abandoned by society, is succored no more by her nun caretakers than by her mentally ill fellow inmates (some of whom were played by people with Down’s Syndrome). Jeanne is outwardly rational, too, though it is hard to tell whether she is sane or insane given that children are less skeptical than adults when it comes to believing in gods and legendary figures. Her “divine” call to arms as a teenager can be taken at face value or as a delusional set of impulses—even if she truly inspired the French army to lift the siege of Orléans (the depiction of which is beyond Dumont’s remit).

Jeanne’s vision of the saints Catherine, Margaret, and Michael, which closes the first half of the film, is literally and fetchingly rendered, with Dumont’s customary deadpan, but could be the projection of a schizophrenic. (She sees the saints in 1425, when she is eight in the film; historical record has her at 13 that year.) The singing is blissful in places—less so than some of the angular dance moves—but its beauty is entirely secular. Dumont is the acme of a religious atheist in contemporary cinema.

Because it removes the mysticism from Joan of Arc’s momentous history, Jeannette will never be as venerated as Carl-Theodor Dreyer’s The Passion of Joan of Arc (1928), as popular as Victor Fleming’s Joan of Arc (1948), or as argued about as Otto Preminger’s Saint Joan (1957). It might prove one of Dumont’s lesser films, despite its fierce soundtrack and the wonderful in-your-face performances by Prudhomme, Voisin, and Lucille Gauthier as Hauviette, eight-year-old Jeannette’s spunky BFF. But lesser Dumont is still rewarding.