The Best Jazz Clubs And Bars In New Orleans 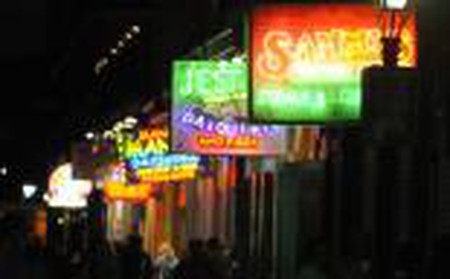 New Orleans, Louisiana is widely considered the birthplace of jazz, where voodoo drum rituals, African-American slave traditions, and Latin rhythms paved the way for the genre’s first rumblings around the end of the 19th century. New Orleans has been home to such musical legends as Buddy Bolden, Louis Armstrong, and Harry Connick, Jr. Today, you can still hear great jazz all over the city, including the neighborhoods and venues highlighted below. 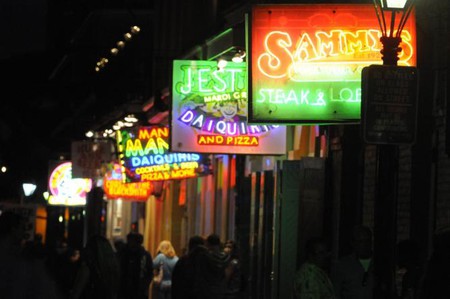 The French Quarter, or Vieux Carré, is the most iconic neighbourhood in New Orleans, with its Spanish architecture and French name. Known for loud bars playing ‘Top 40’ hits, Bourbon Street may be the French Quarter’s most famous street. If you know where to look, you can find some of the city’s best jazz clubs dotting Bourbon Street and the surrounding neighbourhood.
Grammy-award-winner Irvin Mayfield opened up Irvin Mayfield’s Jazz Playhouse in 2009 right in the heart of Bourbon Street. Every evening, the Playhouse features live jazz by a variety of artists, both established and up-and-coming. But Bourbon Street is also home to older classics, such as Fritzel’s and Maison Bourbon. Preservation Hall, home of the famous Preservation Hall Jazz Band is only half a block off Bourbon Street. Parallel to Bourbon Street is Royal Street, stomping grounds for a large number of street performers and musicians. Strolling down Royal Street during the day, you’ll hear all types of musical genres, ranging from traditional New Orleans jazz to bluegrass to hip hop.

Located across Esplanade Avenue in the Marigny neighbourhood, Frenchmen Street is considered a local alternative to Bourbon Street. There is no pre-recorded music, only bars and stages playing live music throughout the night. All the clubs and bars are concentrated in a few short blocks, so it is easy to stroll the street and stop in several venues in one evening.
Some of the most widely recognised clubs on Frenchmen Street include The Spotted Cat, Snug Harbor, Three Muses and d.b.a. Snug Harbor and Three Muses are also restaurants, in addition to jazz clubs, so they are great places to experience jazz over a meal. Similarly to the French Quarter, Frenchmen Street is home to a large group of street performers. If you stroll down the street you are likely to hear some great music without even going inside the clubs.

Historically, Faubourg Tremé is the most important neighbourhood in the city for jazz; it was here that Buddy Bolden and other jazz pioneers first honed the craft. Walking through the Tremé today, you can practically feel the music wafting out of the buildings and streets. The faubourg is the oldest Black Creole and African American neighbourhood in the country, and it served as an important centre for the early Civil Rights movement during the period after the American Civil War.
The Mother-in-Law Lounge, once owned by Ernie K-Doe and now owned by trumpet player Kermit Ruffins, is one of the necessary stops in the Tremé. Other important Tremé jazz experiences include an evening listening to the Tremé Brass Band at the Candlelight Lounge, a stop at the Andrews family’s Ooh Poo Pah Doo Bar, and an evening listening to Kermit Ruffins play at Bullet’s Sports Bar. The clubs and bars in Tremé are casual and down-to-earth: great for seasoned cultural travelers who want to discover the true essence of the city.

Another great way to experience jazz in New Orleans is by attending one of the many live music festivals or concert series dotting the calendar throughout the year. First established in 1970, the New Orleans Jazz and Heritage Festival is a major destination for jazz-lovers worldwide. Today, Jazz Fest combines local New Orleans talent with out-of-town headliners. In comparison to Jazz Fest, some of the smaller local festivals are less crowded and allow visitors to get closer to the action. French Quarter Festival, Chaz Fest, Bayou Boogaloo, and Satchmo Summerfest are all great ways to hear both well-known and new jazz artists, as well as experience some different parts of the city.
Live concert series also take place in bursts throughout the year, including Wednesdays at the Square in the spring and Wednesdays on the Point during the summer. Wednesdays on the Point concerts are located on historic Algiers Point, just a short ferry ride across the Mississippi River from the French Quarter. Finally, the Jazz in the Park series at Armstrong Park in Faubourg Tremé takes place during spring and autumn and builds on the neighbourhood’s already existing tradition of welcoming jazz-lovers. 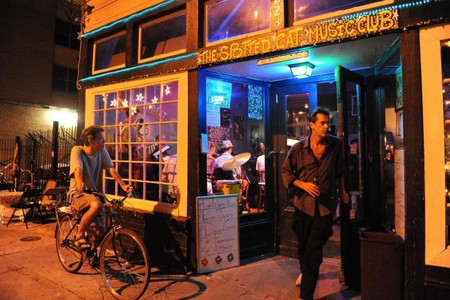 The Spotted Cat / Courtesy of NewOrleansOnline.com

Of course, great jazz music cannot be confined to a few neighbourhoods or venues. Clubs, bars and street corners all over the city are frequently visited by jazz performers. The Maple Leaf Bar on Oak Street in Uptown New Orleans is another major jazz destination, hosting groups and artists such as Rebirth Brass Band and George Porter on a regular basis. Also uptown, the Dos Jefes Cigar Bar is an intimate setting for smaller acts.
Little Gem Saloon in the Central Business District is one of the oldest and most historically significant jazz clubs in the city. It first opened in 1903 and was a popular hangout for legends such as Jelly Roll Morton and Buddy Bolden. The Little Gem Saloon closed its doors in the early 1960s, but it re-opened in 2012 under new ownership and direction.
Finally, the Bywater neighbourhood is home to Bacchanal Wine Bar, which hosts live music every night of the week. The outdoor courtyard is a great place to sip wine and take in the sounds of up-and-coming gypsy jazz artists.