Of all the American cities to throw one last celebration before Lent, New Orleans is the best known, thanks to its full-throated carnival on “Fat Tuesday,” or Mardi Gras. Culture Trip takes a look at the traditions and quirks of this famous festival to give you a better understanding of just how integral it is to Louisiana culture.

Although the city’s celebrations are now most associated with debauchery and days-long drinking sessions, Mardi Gras in New Orleans is one of the most storied and colourful carnivals in the United States – and, indeed, the world. From its distinctive color scheme to the cakes handed out with abandon and the beads you’ll find strewn across Bourbon Street, here is a list of Mardi Gras traditions to enhance your understanding of this party like no other.

Mardi Gras krewes are social organizations that host balls or put on parades each carnival season. Some krewes have open membership, while others are highly exclusive or secretive. They can be organized by neighborhood, interest or involvement in the community. Historically, krewes were all male, but the first all-female krewes began to appear in the early 1900s. The two best-known krewes that parade on Mardi Gras are the Krewe of Rex and the Krewe of Zulu. 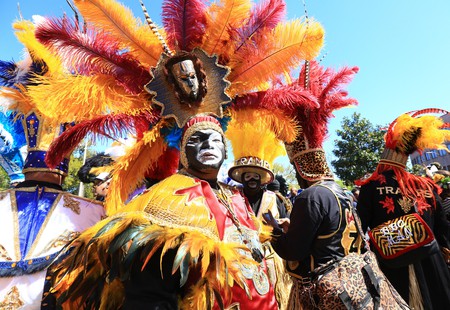 The official colors of New Orleans Mardi Gras are purple, green and gold. The Krewe of Rex chose these colors in 1872 in part to honor the Russian Grand Duke Alexei Alexandrovich Romanov, who visited New Orleans during that year’s carnival season. The krewe asked the people of New Orleans to display the colors, which represent justice (purple), faith (green) and power (gold), on Mardi Gras.

Most krewes select a royal party each year, which consists of a king, queen and often dukes and maids. For traditional male krewes, the king is usually a member of the krewe, while the queen is often a debutante. However, this varies from krewe to krewe, particularly women’s krewes, in which the queen is typically a member of the krewe. The King of Rex is considered the King of Mardi Gras, and the leader of the festival celebrations. 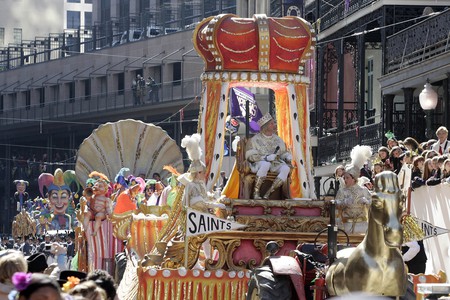 Though pre-Lenten Mardi Gras balls and parties were held in New Orleans as early as the mid-1700s, the first documented parade in the city did not occur until 1837. This first parade more resembled a procession of revelers in costume than it did the large, organized parades of today. This year, 70 to 75 parades will roll in the greater New Orleans area, bringing thousands into the streets to revel and dance.

In the early days of Mardi Gras in New Orleans, participants wore masks to escape social constraints and allow themselves to be free to mingle with whomever they chose. Many krewes wore masks to keep their identities secret. Today, any person who rides on a float during a Mardi Gras parade, other than celebrities or krewe royalty, is required by law to disguise his or her face. Some krewes wear masks, while others choose to paint their faces. 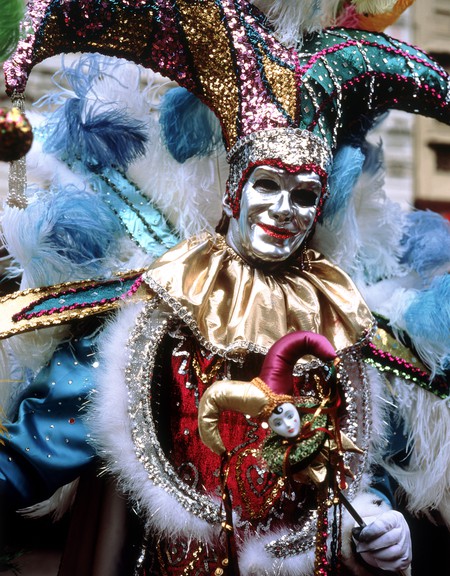 Beads have been thrown from floats since the very first parades rolled down the streets of New Orleans. These first beads were made of glass, but krewes began throwing plastic beads in the mid-20th century. Doubloons were first thrown by the Krewe of Rex in 1960. These coins featured the krewe’s founding date, emblem and name on one side, and the current year and theme of the parade on the other side. The doubloons were so popular that each krewe created its own. In addition to beads and doubloons, float riders today throw a variety of trinkets, including plastic cups and stuffed animals.

The Zulu coconut or ‘golden nugget’ may be the most coveted of all Mardi Gras throws. Typically, the meat is removed from the coconuts and they are hand-painted by float riders before being tossed into the crowds below. Coconuts have been slightly controversial through the years. They were banned in 1988 due to insurance issues, but were later allowed again to continue the tradition. Other krewes have signature throws, which are often hand-decorated by members. The Krewe of Muses, for example, throws highly sought-after hand-decorated shoes from their float. 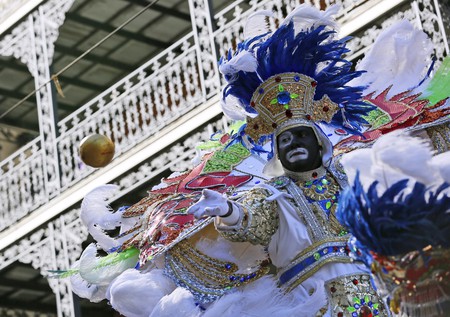 The concept of a king cake comes from the French galette des rois. Today, New Orleans’ king cakes look nothing like their French counterparts. Traditional New Orleans king cakes are decorated with purple, green and gold sugar icing. They may be plain or filled with fruit, pecans or cream cheese. A plastic baby is placed inside the cake, and tradition dictates that whoever is given the piece with the baby inside must buy the next cake or throw the next party. Over 500,000 king cakes are sold in New Orleans each year, and at least 50,000 are shipped out of state.

Before New Orleans had electric street lights, slaves or free people of color walked in front of floats carrying large torches so that revelers could see the parades that rolled at night. Today, some krewes still roll with the flambeaux, but their purpose is to entertain rather than light the way. Typically, the flambeaux dance with their torches, to the delight of many spectators. Their world-class performances draw the crowd’s attention and help enhance the spectacle of the floats.

Mardi Gras Indians may be one of the most mysterious aspects of New Orleans Mardi Gras, particularly for visitors to the city. Tribes were formed by African American communities who were excluded from traditional parades and krewes, and they typically poke fun at krewe royalty and governing structures. There are 30 to 40 Mardi Gras Indian tribes in New Orleans today. The tribes compete to see who can make the most elaborate suits or handmade costumes, incorporating thousands of feathers into their outfit. 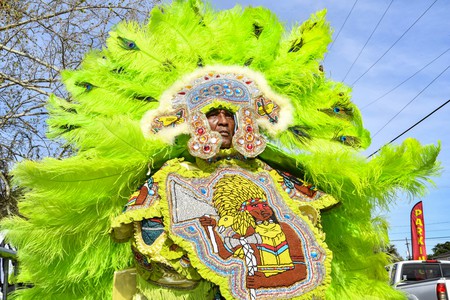 Set up to chide the clubbable nature of the Krews, the Mardi Gras Indians often take decorated outfits to a whole new level | | © Erika Goldring/Getty Images
Give us feedback