The Story Of Jazz Icon And Trumpet Master, Louis Armstrong 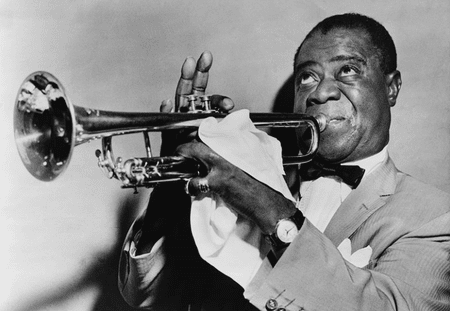 Louis Armstrong was born in New Orleans, Louisiana on August 4, 1901 – nicknamed ‘Pops,’ ‘Satchmo’ and ‘Ambassador Satch,’ Armstrong is one of the most influential jazz musicians of all time, with his mastered trumpet solos and distinguishable raspy vocals. Making waves in the 1920s, he quickly rose to fame as an icon in the music world.

Born in “the Battlefield,” one of the poorest neighborhoods in New Orleans, Armstrong had a difficult upbringing – his father left at a young age, and his mother, who picked up prostitution, often left him with his grandmother. By fifth grade, Armstrong dropped out of school to find a job, eventually collecting junk and delivering coal for a Jewish family. On New Year’s Eve 1912, Armstrong was arrested for firing his step-father’s gun into the air; he was sent to a Home for Boys where he learned to play the cornet, stumbling upon his new-found love for music. Upon his release in 1914, Armstrong set out for a life in music – studying under one of the greatest cornet musicians in New Orleans, Joe ‘King’ Oliver, he quickly earned the reputation as a charismatic stage performer and talented blues musician. 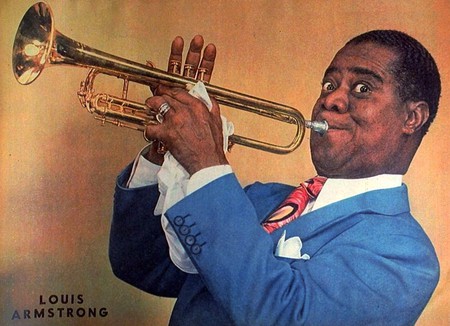 Throughout his career, Armstrong played in various bands: in 1918, he joined Kid Ory‘s band, one of the most popular bands in New Orleans at the time, where he played local parties, marches, dances, and at small bars called ‘honky-tonks.’ The next year, he played with a band led by Fate Marable, where he encountered many jazz legends while performing on riverboats in the summer. In 1922, he headed to Chicago to join King Oliver’s Creole Jazz Band, and by the following year, Armstrong recorded his first solo on the song ‘Chimes Blues’. Two years later, he headed to New York City to play with Fletcher Henderson’s Orchestra, a popular African-American dance band – he introduced swing music to the band, transforming the group into the first jazz big band. While in NYC, Armstrong recorded with many jazz stars like Sidney Bechet and Bessie Smith; however, he left in 1925, returning to Chicago to play with his wife’s band.

While in Chicago, Armstrong began recording under his own name as ‘Louis Armstrong and His Hot Five,’ producing over 60 records between 1925 and 1928 – these tracks are referred to as the most significant recordings in jazz history. With songs like ‘Cornet Chop Suey,’ ‘Heebie Jeebies’ and ‘Potato Head Blues,’ Armstrong introduced ‘scat singing‘ and incredible high notes, changing the course of history – jazz music had become a solo art. In 1926, Armstrong switched from the cornet to the trumpet, and continued to record some of the most influential recordings in music history, including ‘West End Blues’ (one of Armstrong’s best known works), ‘La Vie En Rose,’ ‘Mack the Knife,’ and ‘Star Dust,’ the latter changing American pop vocals and influencing artists like Bing Crosby, Billie Holiday, Frank Sinatra and Ella Fitzgerald. In 1967, he recorded ‘What a Wonderful World,’ a vocal-focused ballad that did not have the trumpet – the track, hitting No. 1 across the globe, became Armstrong’s longest lasting song. By the end of the ‘Swing Era’, Armstrong had scaled his group down to a six-member band called the All Stars, whom he remained with until the end of his career, and included jazz legends like pianist Earl ‘Fatha’ Hines and drummer Sid Catlett. 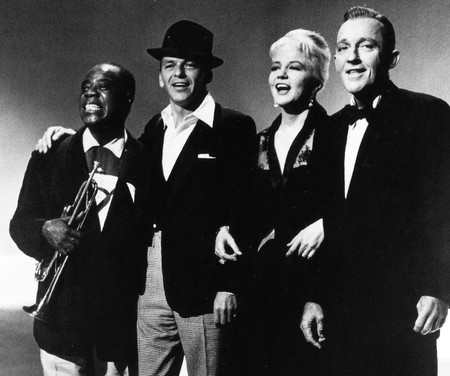