The Most Instagram-Worthy Treats in New Orleans 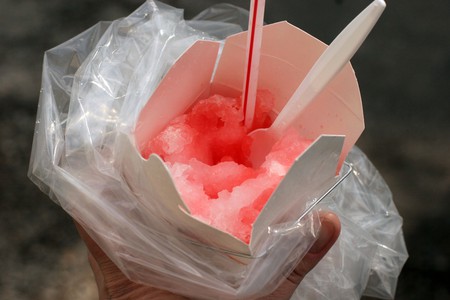 New Orleans is an ideal spot for the avid Instagrammer. As a city that’s known for delicious cuisine, it offers plenty of spots that are as tasty as they are photogenic. Here are some of our favorites.

Oysters (and a cocktail) at Seaworthy

Known for its creative and fresh seafood dishes, including raw oysters (when in season), Seaworthy is located in New Orleans’ trendy Ace Hotel. Situated in a building that was originally constructed in the 1830s, this restaurant gets bonus points for its elegantly rustic atmosphere. Not necessarily what most of the world would consider a “treat,” in the Big Easy seafood is always a prize.

The whole enchilada, or what have you. 📷: @atasteofkoko

A simple dessert consisting of perfectly textured shaved ice drenched in sweet syrup, snowballs are a New Orleans staple food. Offering a staggering amount of flavors, all brightly colored, Hansen’s is every New Orleanian’s summer savior with their sweet, cold and deliciously cheap snowballs. For those with a real sweet tooth, ask for it “stuffed,” so it comes with ice cream, or ask for a splash of sweetened condensed milk.

Boasting a massive collection of high-end, exclusive French candies and other sweets, La Riviere Confiserie is an Uptown candy shop with a colorful and inviting atmosphere. A must-see for any Francophile with a sweet tooth, the treats here taste as good as they look, and seriously, they look good.

In a mostly residential block of Mid-City, The Station Coffee Shop opened up last year, thanks to husband-and-wife team Jonathan and Megan Walker. Now, it satisfies the whole neighborhood’s need for fresh coffee, made-from-scratch pastries, sandwiches and decadent desserts, like the popular ginger-syrup-soaked sponge cake. Situated in a former gas station that had been abandoned for decades, the couple expertly renovated the place using mostly refurbished materials, and with a bright purple roof, it’s as photogenic on the outside as it is within.

This contemporary, popular restaurant draws upon local and international flavors, serving up the tagline “Southeast Asia by way of New Orleans.” Try one of their many delectable, seasonable entrees, but make sure to save room for the most important item on the menu, a refreshing ginger and lemongrass ice cream sandwich.

A trip to New Orleans isn’t complete without a stop at Angelo Brocato’s, the iconic, Sicilian-influenced confectionery shop that has been a favorite among locals for decades. Offering gelato in all flavors and colors, as well as cookies and cakes, it’s a picturesque little spot that will satisfy your sweet tooth and your followers.

With as much as I love coffee, it should come as no surprise that I’m a big fan of tiramisu. And this one from Angelo Brocato’s is top notch. I think I could eat this every single day. #neworleans #nola #nolafoodgramOTW #iheartnola #followyournola #amournola #nolaeats #tiramisu #cake #espresso #foodstagram #foodphotography #angelobrocato #dessert #sweets #sweettooth

This casual Magazine Street eatery specializes in – you guessed it, freshly baked donuts – sliders, and small-batch Stumptown coffee. Here, everything is made from scratch, even the sprinkles, and served daily on a rotating menu. A true one-stop shop, where a miso praline bacon egg biscuit and a cookies and cream doughnut is exactly what your feed’s been craving.

Shoutout to @districtdonuts for making this picture possible! I would also like to thank the guy behind the register who gave me the prettiest sangria donut, so I can post it on IG. You the real MVP! 🍩🤤 #followyournola