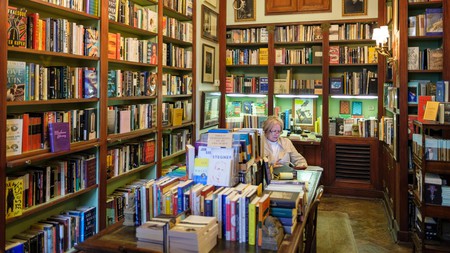 From William Faulkner to Anne Rice, literary culture in New Orleans runs deep. Our guide will help you to discover the important landmarks and bookstores, as well as the Louisiana city’s most famous resident authors.

From The Awakening (Kate Chopin, 1899) to Zeitoun (Dave Eggers, 2009), many great works of literature have been set in New Orleans. The boisterous city and its eclectic residents brighten up the novels they populate, and authors such as Truman Capote, Anne Rice, William Faulkner, Mark Twain and Tennessee Williams have mined its culture for inspiration. And in some cases, writers have imprinted their own mark on Louisiana’s culture. Below, we look at the noteworthy landmarks, bookstores, authors and books of the literary city of NOLA.

Hotel Monteleone and the Carousel Bar and Lounge

Hotel Monteleone, one of the three hotels in the United States recognized by the Friends of the Library Association as an official literary landmark (the other two are the Plaza and Algonquin in New York), and its Carousel Bar and Lounge have long served the writer community in New Orleans. Ernest Hemingway, Tennessee Williams and William Faulkner each took up residency here while visiting New Orleans, and appropriately each has a suite named after him. Truman Capote would tell the press that he was born inside the hotel – this is not exactly true: his mother was pregnant with him while staying there, but hotel staff got her safely to Touro Hospital, where baby Capote was delivered. Other notable visitors include Eudora Welty, Anne Rice, Stephen Ambrose and John Grisham.

At 1014 Dumaine Street in the French Quarter stands the only home Tennessee Williams ever owned in New Orleans. After growing tired of renting, Williams bought this property in 1962 and kept it until his death in 1983. Despite leaving behind a fortune of $10 million, America’s most famous playwright could still be spotted at the time washing his own socks at a laundromat on the corner of Burgundy and Dumaine. He didn’t get his wish, but Williams once said, “I hope to die in my sleep… in this beautiful big brass bed in my New Orleans apartment, the bed that is associated with so much love.”

Anne Rice grew up in New Orleans and set her most famous work, Interview with the Vampire (1976), the first part of her Vampire Chronicles series, in the city. The 1881 mansion she once inhabited would fit her Gothic-themed novels well. Rice no longer resides in the historic house at 3711 Saint Charles Avenue she purchased in the late 1980s, but it’s still a fixture on the Anne Rice tour. Sign up near Garden District Books.

Built in 1850, this four-story building on Jackson Square in the French Quarter was named a National Historic Landmark in 1974. Each year since 1986, the five-day Tennessee Williams and New Orleans Literary Festival is capped by the Stella and Stanley Shouting Contest, during which men and women alike embody Stanley Kawalski, the brutish protagonist of Williams’s A Streetcar Named Desire, to bellow out their loudest “STELLLAAAA!”

John Kennedy Toole wrote A Confederacy of Dunces in 1963. He killed himself six years later and after the tireless efforts of his mother, his debut was published 11 years after his death. In 1981, Toole became the first author to win a Pulitzer Prize posthumously. Dunces, which incorporates a bevy of characters including a local cop, a strip club owner and a Tulane professor, is said, through its use of local color, to be an accurate depiction of the Crescent City. The main character, Ignatius J Reilly, is a roguish, slovenly man-child filled with contempt and delusions of grandeur; he is immortalized as a bronze statue on the 800 block of Canal Street, the former site of DH Holmes Department Store, in a reference to the novel’s opening scene during which Reilly awaits his mother under the store’s clock.

For a brief six months in 1925, future Nobel laureate William Faulkner lived in a second-floor apartment on this Pirate’s Alley property along with artist William Spratling. There, the two indulged in drink and shot BBs out the window. Today, Faulkner House pays homage to its namesake by keeping plenty of books by the Southern Modernist in stock, along with books on Faulkner and his works. Established in 1988 by Joseph J DeSalvo Jr and his wife Rosemary James, Faulkner House Books also carries books on the American South, rare first editions and fine literature.

Octavia Books is tucked away in a neighborhood just off of the bustling Magazine Street shopping area in uptown New Orleans. Opened in 2000 by Tom Lowenburg and Judith Lafitte, this indie is dedicated to serving its community through frequent book signings and talks and by highlighting the breadth of local authors who call NOLA home. The staff is known to be friendly and knowledgeable, or, as the owners said, “We appreciate our customers, know our stock, and are able to match the two.”

In the heart of downtown New Orleans, across the street from the historic Roosevelt Hotel, lies Crescent City Books. Open since 1992, this neatly organized store specializes in antique, out-of-print and rare books from the past 400 years and maps, engravings and prints from the past 500 years. And, as every great bookstore should, Crescent City has a feline mascot, Wesley the cat.

Blue Cypress Books, opened in 2007, offers the largest selection of children’s books in the area, but even if you’ve outgrown Goodnight Moon, there’s something here for you. The store is known for its wide array of selections from classics to contemporary fiction, poetry, art, photography, science fiction, mystery and antiquarian works, as well as collectibles. Located on Oak Street in uptown New Orleans, Blue Cypress Books is open every day of the week except for Sunday and hosts a book club every third Wednesday of the month.

The historic property, the Rink, on which Garden District Bookshop lies was, at one time, a livery stable, mortuary, grocery store and gas station. But what made it famous was the skating rink, built in 1884, which its name retains. Originally a roller skating rink called the Crescent City Skating Rink, it was opened to entice visitors in town for the World’s Cotton Centennial Exposition. As a bookstore, GDB is known for its large selection of new and used regional titles, along with titles in fiction, non-fiction, children’s books and hundreds of signed first editions.

Peyton Burgess’s debut collection of stories, set in the aftermath of Hurricane Katrina, homes in on the lives of those who had to return to the ruin and militarization of New Orleans. The characters here get boozed up, attend lost mail auctions and navigate the bureaucracy of FEMA. Its tales are tinged with sadness and loss, but are told with humor. Written in vibrant prose, The Fry Pans Aren’t Sufficing offers a vivacious view of post-Katrina NOLA.

The House on First Street

When Katrina hit, not everyone was as lucky as writer Julia Reed. Reed’s home in the historic Garden District suffered a lone broken window, while four blocks away, a corpse lay in the street, a message on the sheet it was wrapped in reading, “Here Lies Vera… God Help Us.” Reed, who purchased her Greek Revival mansion after being drawn to New Orleans on an assignment, recognizes her privilege and orders more than 700 barbecue meals for the National Guard. Her memoir tells the story of buying a new home, fixing it up and getting married, only for a storm to come one month after she’s finished. Through her journalistic lens, Reed offers a unique view of NOLA class and compassion as the city comes together after Katrina.

One Drop: My Father’s Hidden Life – A Story of Race and Family Secrets

Born in New Orleans, Anatole Broyard, famed literary critic for The New York Times, confessed to his two adult children, on his deathbed, that he had secret Creole ancestry. This revelation, for which Broyard has been criticized, led daughter Bliss to explore her Louisiana Creole multiracial ancestry. Bliss Broyard tracks down previously unknown relatives in New York, Los Angeles and New Orleans to get a full picture of her background after growing up as a passable WASP all her life.

Author of The English Patient, Michael Ondaatje, began his literary career with this novel. The story is historical fiction that centers on the real-life figure Buddy Bolden, a cornetist whose improvisational New Orleans ragtime and blues made him a pivotal architect of the jazz genre. Bolden’s mind was troubled by mental illness and drink, and he spent most of his life in the Louisiana State Insane Asylum. With so little known today about Bolden’s life, Ondaatje weaves history and myth that reads at times like a hypnotic poem, and culminates in a tale that is both grand and tragic. Written in a prose that resembles the freewheeling nature of jazz itself, the novel uses a schizophrenic form to attempt to better understand its subject.

The Romanian-born novelist and National Public Radio correspondent Andrei Codrescu offers a selection of essays spanning from 1985 to 2005. They chart his love affair with his adopted home of New Orleans and end with an afterward about Katrina. In deft prose, Codrescu recalls learning to become a NOLAian, becoming acquainted with some of the city’s eccentric residents and taking a stint leading a Mardi Gras parade route.

Codrescu’s essays also warn of the city’s faulty infrastructure. It was built in 1718 by Jean de Bienville, who ignored his engineer’s concerns regarding building a city in a marsh, flanked by three bodies of water; the disaster, Codrescu felt, was nigh.

“The saving grace of New Orleans was its music, its food, its festivals and the poor,” Codrescu told NPR days after the storm hit. “We’ve been a generator of human and cultural energy for centuries. But all this bounty brought the city no careful engineering, no thought for its future, no worldwide cry for help for its inevitable demise.” He compares the city to Venice and mourns a New Orleans lost in the destruction, but nearly 15 years later, it has survived, just like the Italian city with which it shares a love of music and art.

This article is an updated version of a story created by Michael Barron. It also draws on existing listicles curated by Rebecca Trejo and Ann Marshall Thomas for Culture Trip.