Like most things in New Orleans, the restaurant businesses were completely destroyed when the city flooded. Now, the city’s restaurants have come back even stronger. Read on to discover our guide to the best fine dining options the city of New Orleans has to offer. 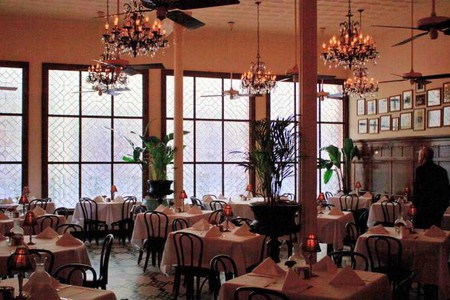 Coined the ‘Old Pink Lady’, Brennan’s legendary and distinct interior of pinks and greens has made this restaurant a hallmark of New Orleans. However, the food surpasses any décor with its Southern and Creole inspiration. Each dish is lavishly prepared,but Brennan’s is locally and nationally known for it breakfast plates. (Apparently, Brennan’s invented Bananas Foster).
Brennan’s, 417 Royal St, New Orleans, LA, USA, +1 504-525-9711

Restaurant, Cajun, $$$
Facebook
Email
Twitter
Pinterest
Copy link
Share
Galatoire’s is a fine-dining combination of French and Creole fare. It’s had a life of success having been open for over a hundred years. Sticking to Southern tradition and with an upscale nature, there is a dress code that requires sport coats.

Another fine dining restaurant located in the French Quarter, Arnaud’s is one of the few restaurants in the city that serves authentic French-Creole cuisine. The restaurant has been operating for almost a century, and its success and reputation have yet to be tainted. With extravagant dishes that function within French-Creole fare, Arnaud’s serves an authentic and lavish experience.
Arnaud’s, 813 Bienville Avenue, New Orleans, LA, USA, +1 504-523-5433

Restaurant, Contemporary, French, $$$
Facebook
Email
Twitter
Pinterest
Copy link
Share
Owner and former chef of August, John Bush presides over this and five other restaurants in the city. August was the first restaurant endeavor for Bush and it has obviously paid off (and even landed him a gig on the Food Network). August is a triumphant fine dining restaurant that works within French fare. Dishes range from French and Creole takes on poultry, seafood, and finer red meats. French taste at the core of its design, August’s presentation is executed flawlessly.
Give us feedback