The 8 Best Movies To Check Out Before Visiting New Orleans 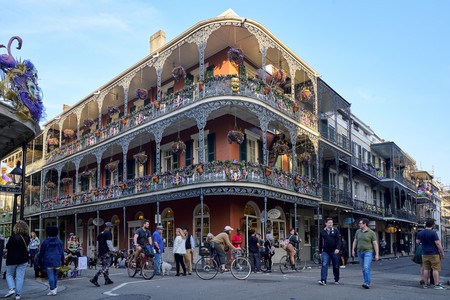 With its authentic Creole architecture, multicultural history, and unique old-world character, the city of New Orleans is like a real-life movie set. Luckily, Hollywood has sent its finest to the Crescent City to film some of the blockbusters we all know and love. If you’re heading to the Big Easy, download these eight films for the plane ride over.

Based on a 1976 novel by New Orleans native, Anne Rice, Interview with the Vampire is a dramatic horror film, produced by Irish film director, Neil Jordan. This film, which was nominated for two Oscars and won 19 awards independently, tells an epic vampire story where love, betrayal, loneliness, and hunger take Louis de Pointe du Lac, a young indigo plantation owner, played by protagonist Brad Pitt, on a haunting adventure through the south of New Orleans. The film chronicles Pitt’s character sharing his heartbreaking story—as he searches for redemption—with a San Francisco newspaper reporter, and how he became a vampire at the hands of the evil Lestat de Lioncourt, played by Tom Cruise, in the year 1791.

Based on a play by 20th-century playwright and author Tennessee Williams and with screenplay by Gore Vidal, Suddenly, Last Summer is a 1959 American Southern Gothic mystery film that takes place in New Orleans during 1937. Directed by Academy Award winner Joseph Leo Mankiewicz and produced by independent film producer Sam Spiegel, the plot centers on Catherine Holly, played by the iconic Elizabeth Taylor, being psychologically harassed by her wealthy aunt from New Orleans, Violet Venable, played by Katharine Hepburn, who tries to silence her with a lobotomy after she witnesses her only son’s death.

The Curious Case of Benjamin Button (2008)

Directed by Michael Curtiz and produced by Hal B. Wallis, the American film producer best remembered for his work on Casablanca, King Creole is the story of 19-year-old high school student Danny Fisher, played by Elvis Presley, who works tirelessly at a shoddy New Orleans joint as a busboy before and after school to help support his unemployed father and sister. One night, he gets a chance to perform as a singer and delivers unmatchable chords and style to the cheering crowd. Based on the 1952 novel by Harold Robbins A Stone for Danny Fisher, this movie takes place in the French Quarter and depicts a beautiful frame of 1958 New Orleans.

An American crime drama, directed by Jim McBride and written by Daniel Petrie Jr., The Big Easy is a movie set in New Orleans during the 1980s. The plot centers on a homicide lieutenant in New Orleans, Remy McSwain, played by Dennis Quaid, who’s caught accepting payoffs in an Internal Affairs sting. State District Attorney Anne Osborne, who also plays his love interest in the movie, follows the case closely from the DA’s office and finds out she has to prosecute him. The film, which was later adapted for a television series for two seasons, opens with an aerial shot of the bayou in New Orleans and the Cajun band BeauSoleil, playing Zydeco Gris Gris. The film also features well-known locations, including Tipitina’s, Antoine’s, and the French Quarter Strip, as well as Mardi Gras parade floats.

A Spike Lee documentary film, first aired on HBO during August 2006, When the Levees Broke: A Requiem in Four Acts, won three Primetime Emmy Awards, and is a four act depiction of the devastation suffered in New Orleans, following the levees’ failure during Hurricane Katrina. The film also explores the U.S. government’s role and response to the disaster. Described by Sheila Nevins, chief at HBO’s documentary unit, as one of the most important films HBO has ever produced, the documentary includes interviews with politicians, journalists, historians, engineers, and many residents of the flooded areas, who share first-hand accounts of their experiences during and after the levees’ failure.

Directed by American film director, screenwriter, and producer William Oliver Stone, JFK is a historical legal conspiracy thriller that examines how a DA in New Orleans, played by Kevin Costner, discovers that there are more details to the Kennedy assassination than the official story suggested. Adapted from the books On the Trail of the Assassins by Jim Garrison and Crossfire: The Plot That Killed Kennedy by Jim Marrs, the film resulted in controversy when major American newspapers accused Stone of taking liberties with historical facts, including President Lyndon B. Johnson’s implication in Kennedy’s murder. Earning $205 million in worldwide gross, the film won two Academy Awards and earned Stone a Golden Globe for best director.

An infectiously funny movie following the reunion of four college best friends during a trip to the real-life Essence Festival in New Orleans, Girls Trip was the first film produced, directed, written by, and starring African Americans to make over $100 million at the box office. Playing on the clichés of the city’s party culture, this film finds Queen Latifah, Jada Pinkett Smith, Regina Hall, and America’s favorite new actress, Tiffany Haddish, sipping hurricanes on Bourbon Street, zip lining across unsuspecting tourists (and then some), and inspiring the world to finally book that trip down South.