The French Quarter is New Orleans‘ oldest neighborhood. Buildings here are a mix of French Creole and Spanish influenced architecture and many of them are noted historical landmarks. The food here reflects the area’s history and culture, blending high-class cuisine, spicy and hearty Creole fare and Tapas-inspired dishes. If you’re thinking of exploring this historic area of New Orleans, we have selected the best restaurants for you.
The Court of Two Sisters © Gary J. Wood/Flickr

The Court of Two Sisters

Bistro, Restaurant, American, Cajun, Vegetarian, Vegan, $$$
The Court of Two Sisters’ history can be traced back to 1726, the year when Sieur Etienne de Perier became the second French royal governor of Louisiana. Once he left, the building was transferred to the next governor and became the home of the next five. In 1832, the building was restored and Jean Baptiste Zenon Cavalier, president of the New Orleans Bank, purchased the place for his family. Cavalier sold the place in 1886 to Emile Angaud. His daughter-in-law, Bertha, and Emma Camors started ‘The Shop of Two Sisters’. The shop sold Mardi Gras clothes, formal gowns, lace and perfumes. Sometimes, the sisters would sell cake and tea to their customers. This led to the place eventually becoming a restaurant after the sisters passed. The Court of Two Sisters is currently a small bistro popular among locals and tourists.
More Info
Open In Google Maps
613 Royal Street, French Quarter, New Orleans, Louisiana, 70130, USA
+15045227261
View menu
Visit website
Visit Facebook page
Send an Email
Give us feedback

Bar, Bistro, Restaurant, American, French, Seafood, Cocktails, Wine, Beer
Acme Oyster House | Ken Lund/Flickr
In 1918, Arnaud Cazenave, a wine salesman, opened Arnaud’s with the intention of serving authentic Creole cuisine. He believed having pleasurable meals was as important as having life goals. His restaurant was the place to be in the early days, visitors from all over the world feasted on nine oyster appetizers, 51 seafood entrees, and a rich variety of vegetables. The restaurant was abandoned after Cazenave passed on . However, in 1978, new owners Archie and Jane Casbarian restored the property and improved the cuisine. Because of their dedication, Arnaud’s became world renowned again and received widespread acclaim. Come and enjoy classic Creole cuisine at Arnaud’s.
More Info
Open In Google Maps
813 Bienville Street, French Quarter, New Orleans, Louisiana, 70112, USA
+15045235433
View menu
Visit website
Visit Facebook page
Send an Email
Give us feedback

GW Fins is the French Quarters’s main location for high quality seafood. Chef Tenney Flynn selects the finest quality seafood from around the world and creates dishes that enhance the wonderful flavors of the food. He doesn’t believe in masking the original flavors with heavy sauces and spices. Since their seafood is sourced from all over the globe, diners will be able to experience the unique tastes of King Crab from Alaska, Blue Nose Bass from New Zealand, and Halibut from Alaska. GW Fins’ spectacular menu includes dishes such as lobster dumpling with fennel and tomato, cold smoked oysters with a lemon butter sauce, wood grilled New Bedford sea scallops, and Chilean sea bass with sesame spinach. For its impressive menu, GW Fins was named one of ‘America’s Top 20 Best Restaurants’.
Address & telephone number: 808 Bienville St, New Orleans, LA, USA +1 504 581 3467

K-Paul’s Louisiana Kitchen was founded by Chef Paul Prudhomme and his wife in 1979. They never imagined it would become the sensation it is today. The building was built in 1834 and has a first and second floor. The second level is used for seasonal balcony dining, but guests can also use this level for parties and special occasions. Each floor has a kitchen, which allows guests to see how their meals are prepared. Chef Prudhomme uses dry spices, rubs, bottled sauces, and marinades in every dish. The unique ingredients create a magical dining experience for visitors.
Address & telephone number: 416 Chartres St, New Orleans, LA, USA +1 504 596 2530

Diner, Restaurant, French, $$$
In 1905, founder Jean Galatoire brought French recipes and traditions to New Orleans when he set up his restaurant. Galatoire’s has continued thriving with the help of his descendants. The restaurant remains true to the traditions put in place by Galatoire and has even opened two other restaurants, Galatoire’s Bistro and Galatoire’s 33 Bar and Steak. These expansions allow fans of the restaurant to dine at different locations in the same city and sample different meals. For its quality meals and the welcoming and casual atmosphere, the restaurant has received the James Beard Award.
More Info
Open In Google Maps
209 Bourbon Street, French Quarter, New Orleans, Louisiana, 70130, USA
+15045252021
View menu
Visit website
Visit Facebook page
Send an Email
Give us feedback

Restaurant, French, American, Cajun, $$$
Brennan’s site has an extensive history and is one of New Orleans’ landmarks. The building was constructed in 1795 and housed Louisiana State Bank. Once the bank closed, it became a secret place for President Andrew Jackson. Tulane University eventually bought the property and sold it to the Brennan family. In 1946, Owen Brennan opened Brennan’s restaurant to prove that County Arnaud Irish men can do more than boil potatoes. With time the restaurant became a popular spot in town. Locals come to eat, drink, enjoy themselves at this restaurant that serves superb Southern and seafood dishes in an intimate atmosphere.
More Info
Open In Google Maps
417 Royal Street, French Quarter, New Orleans, Louisiana, 70130, USA
+15045259711
View menu
Visit website
Visit Facebook page
Send an Email
Give us feedback

Muriel’s Jackson Square opened its doors in 2001 in a former grand home. Although the place has a rich history, there is one unique feature that makes Muriel’s Jackson Square stand out from other restaurants. There have been many rumours of paranormal activity since its beginnings. The restaurant is located near the Séance Lounge, which has constant knocks on the brick walls and a female voice has been said to be heard when there are no women around. Since the ghosts have proven to be harmless, come and discover this mysterious restaurant.
Address & telephone number: 801 Chartres St, New Orleans, LA, USA +1 504 568 1885 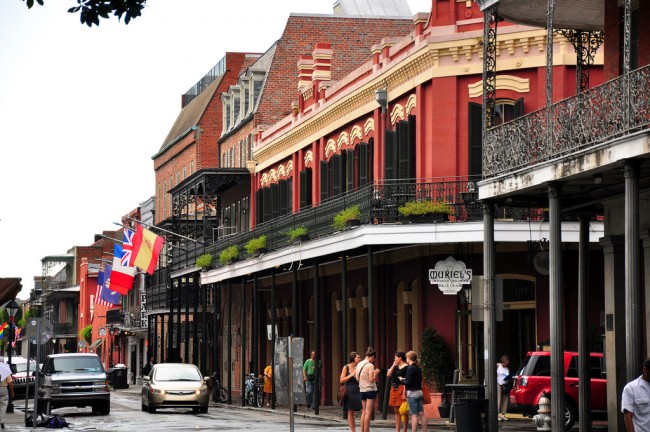 Restaurant, Bar, Steakhouse, $$$
Port of Call | © gwen/Flickr
Port of Call welcomes all visitors to enjoy wonderful steaks and burgers. Port of Call was originally a small, quiet,restaurant that only opened in the evening. Currently, Port of Call is an extremely popular burger restaurant that serves lunch and dinner daily. Their burgers are to die for, Zagat’s Surveys, Citysearch, and Gambit Weekly voted the restaurant’s burgers the best in New Orleans. Their half pound burgers are ground fresh daily.
More Info
Open In Google Maps
838 Esplanade Avenue, French Quarter, New Orleans, Louisiana, 70116, USA
+15045230120
View menu
Visit website
Visit Facebook page
Send an Email
Give us feedback

Casual, Cosy
Give us feedback