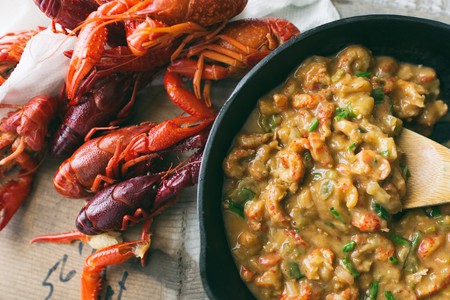 New Orleans is one of the few American locations with a cuisine very particular to the region. Visitors to the city are able to enjoy food that cannot be found anywhere else in the country or, if in some rare instances it can be, the flavors cannot compare to those of the original dishes. Here is a list of 10 foods that represent the truly unique culture and cuisine of The Big Easy.

Invented in Louisiana during the 18th century, the word ‘gumbo’ stems from the term ‘gombo’, an African word meaning okra. This southern dish takes the form of a soup or stew and can be made with a variety of meats or fish, although the base of asic roux, okra or filé powder remains consistent. Considered Creole cooking, the dish combines the traditions and ingredients of diverse world cultures including West Africa, France, Spain, Germany, and Choctaw – a Native American people originating from the land that is now Louisiana – and is representative of the diverse people that have come to form Louisiana tradition. Meat-based gumbo may include chicken, duck, squirrel, or rabbit, while crab, shrimp and oysters would be standard ingredients for the seafood variety. The extensive ingredients and preparation time required for the dish mean that many choose to make it in bulk, and thus enjoying a pot of gumbo is often a social occasion. 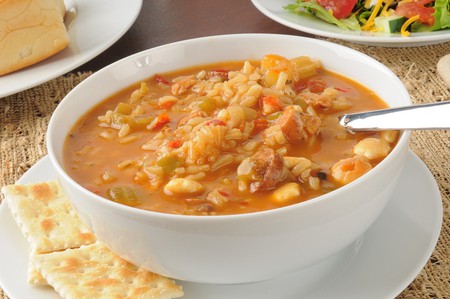 The origins of Jambalaya are linked to Spanish arrival in the New World. The high import tax on saffron led to the development of creative interpretations of paella, initially replacing the beloved spice with juicy tomatoes in the typical Spanish food. With the increased influence of French speaking groups in New Orleans, Caribbean spices were introduced to the recipe, distancing it from its Spanish ties and transforming it into its own dish. Like paella and gumbo, its rice base can be complemented with an array of ingredients; favorite options include beef, pork, chicken, duck, shrimp, oysters, crayfish and sausage. Creole Jambalaya, the version typically made in New Orleans, includes tomatoes, whereas Cajun Jambalaya, of Southwestern and Central Louisiana, does not. According to food historian John Eggerton, in Gonzales, Louisiana, the self-titled Jambalaya capital, the number of recipes is equal to the number of households in the city. 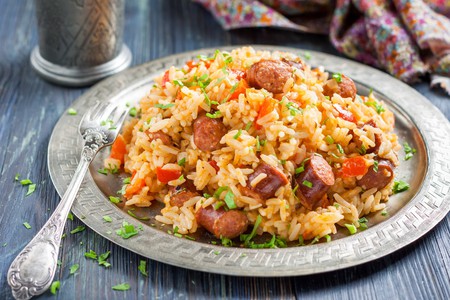 As with many prized New Orleans foods, accounts vary regarding the birth of the po boy sandwich. The predominant tale holds that the sandwich was first served by former streetcar drivers and brothers Clovis and Benjamin Martin who opened a restaurant in the 1920s. When the city’s streetcar workers went on strike in 1929, the brothers demonstrated solidarity by producing an inexpensive sandwich with spare bits of meat and gravy on a French roll. When unemployed workers would come to buy their lunch, kitchen staff would yell ‘Here comes another poor-boy!’, which soon became pronounced as po-boy. New Orleans’ most famous sandwich typically consists of meat, commonly roast beef, or fried seafood. Although many changes have been made to the early gravy and beef original, the po-boy remains the most inexpensive sandwich on the menu in restaurants that serve it. 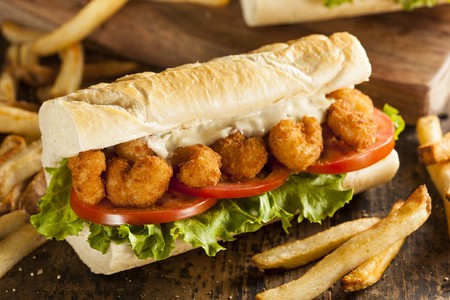 Within Creole communities turtle soup is frequently referred to as Caouane and is a great Louisiana delicacy. The dish has been a staple of New Orleans cuisine since the European settlement of the land. The popular use of tomatoes in Creole New Orleans cuisine distinguishes the city’s turtle soup recipe from those Cajun examples in the rest of the state. In New Orleans, although many variations can be found, consistent ingredients are: turtle meat, veal or beef stock, onions, celery, tomatoes, parsley, thyme, hard boiled egg, lemon and sherry. It has been said that few restaurants serving the soup actually use turtle, replacing the reptile with veal. With frozen turtle meat priced at around $30 for a two pound pack, it is easy to see why. 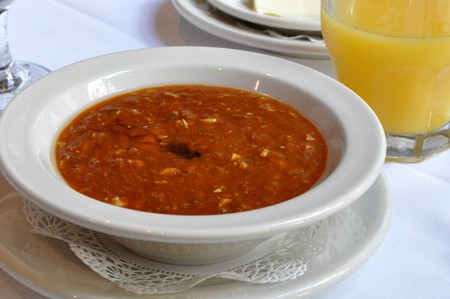 The muffuletta sandwich is named after the round focaccia-like Sicilian bread that serves as its base. Originating among early Italian communities in New Orleans, the bread is piled high with mortadella, salami, mozzarella, ham, provolone and olive salad. The first establishment to serve the muffuletta was Central Grocery, located in the French Quarter, who coined the name in 1904. Marie Lup Tusa, daughter of the founder of Central Grocery, recalls Italian farmers coming to sell their goods at local shops and stopping for lunch at her father’s store. These men would consistently order their sandwiches on either muffuletta or braided Italian bread, layered with all of the meats on offer in the deli. The muffuletta bread was soon recognized as the softer option, and so the sandwich was born. The original Central Grocery muffuletta is served cold, although other venues sometimes offer them toasted. 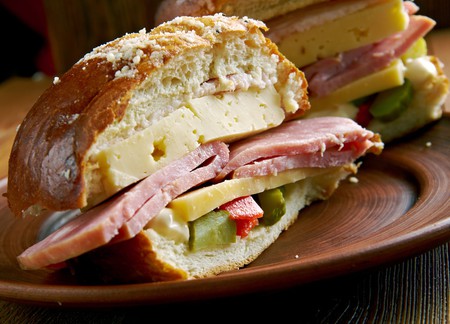 New Orleanians consider themselves to be oyster connoisseurs; enjoy them fried, chargrilled, or raw. Those in the know ask that raw oysters be opened in their presence, preferably while seated at a marble counter. Opinions are mixed on whether these should be consumed plain or topped with a mixture of ketchup, pepper sauce, horseradish and lemon juice. Other recipes include Oysters Bienville, oysters on a half shell covered in a shrimp, cream and cheese sauce, or Oysters Rockefeller, flavored with absinthe and covered in spinach. 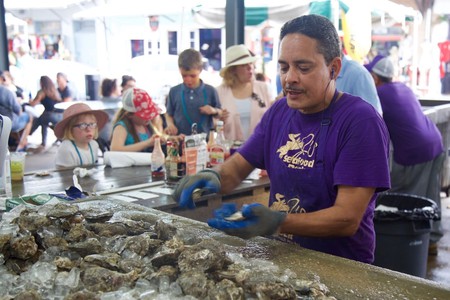 These fried dough squares, dusted with a healthy sprinkling of powdered sugar, are a New Orleans staple and a precursor to the doughnuts of today. The word beignet is both a Celtic term meaning ‘to raise’ and the French word for ‘fritter’. The sweet treat has been connected to Mardi Gras in France since at least the 16th century, and the recipe was brought to New Orleans by French colonists in the 1700s. Cafe du Monde in the French Quarter is the most famous place offering these puffy treats, which are historically served with a cafe au lait. 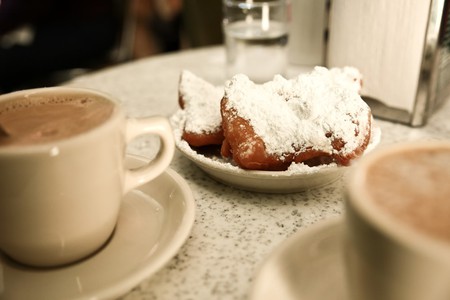 Red beans and rice has a long history as the quintessential New Orleans Monday meal. In a previous era, Mondays were typically a day for cleaning house and women would prepare this simple dish by letting the beans stew while they tended to the laundry and other chores. Beans were usually flavored with the hambone of the previous night’s meal. Although this Monday cleaning tradition has long since expired, many families and restaurants continue to observe the first day of the work week with this tasty and easy to prepare dish. Today red beans and rice are usually accompanied by sausage or pork chops. 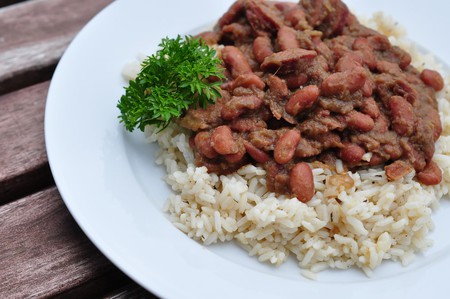 Crawfish are a celebrated crustacean at many New Orleans gatherings, known to the Louisiana crowd as ‘mudbugs’. The word étouffée derives from the term ‘to smother’ which perfectly describes this stew like dish. Engulfed in a season roux, this meal bears similarities to gumbo, although the lack of tomatoes gives it a lighter colour. Étouffée was originally popular in the Bayou backwaters of Louisiana and thus a very popular Cajun meal. Around 25 years ago a waiter working in a Bourbon St. establishment brought the dish in to work to serve to his boss who became very fond of the meal. Étouffée was thus introduced to the city and has since proved a popular food.

Created at Brennan’s restaurant in honor of Owen Brennan’s friend Dick Foster in 1951, Bananas Foster is comprised of bananas and a sauce made from butter, brown sugar, cinnamon, rum and banana liqueur, set aflame and accompanied by ice cream. The process of flambé is frequently turned into a tableside performance. The dish has since spread and today is served at many establishments both in New Orleans and around the world. Brennans New Orleans is still in operation and continues to serve up the classic dish which put it on the map. 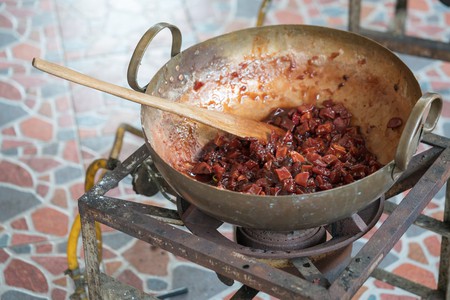 Bananas Foster being prepared | © aSuruwataRi/Shutterstock
Give us feedback