How to Spend a Long Weekend in New Orleans 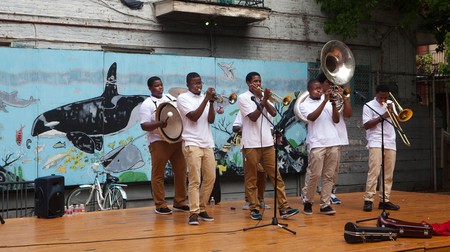 New Orleans is a city to slow down, eat, dance and laugh in. As a city caught somewhere between the US and Caribbean, New Orleans likes to defy convention. Let yourself slow down in NOLA, and know it’s better to laugh longer in one place than see 10.

New Orleanians, past and present, have made New Orleans what it is today. As one of the oldest port cities in the South, New Orleans has always been a melting pot, where wealthy free people of color, native people, French creoles, Irish immigrants and modern-day bohemians all have made their mark. It’s the home of Mardi Gras – the slogan of which is “the biggest free party on earth” – and jazz music. It’s a city where art is done for art’s sake, where beautiful handmade floats and costumes are made to be shown for one day only and completely recycled for the next year. It’s a city that’s fiercely local, where a hometown band will often have a bigger crowd than a headliner. If you make as much effort to talk to people as you do to see places, you’ll begin to see what New Orleans is all about.

You can now travel to New Orleans with Culture Trip and discover the city with a local guide leading the way from the French Quarter all the way to the Louisiana Bayous. However, if you’d rather do things at your own pace, the itinerary below will ensure you make the most of your trip.

Begin your day just behind the French Quarter in St Louis No 1 Cemetery. New Orleans likes to do things a little differently, and that’s true even when they bury their dead. Inside you’ll see the graves of the queen of Voodoo, Marie Laveau, and Homer Plessy who fought against racism during Jim Crow. You may even learn what Easy Rider (1969) has to do with the Catholic Church’s ban on filming in the cemetery. You have to visit the cemetery with a tour guide, of which you’ll find many just outside the gates. You can also go on a walking tour of the French Quarter and cemetery, which gives you the basics of NOLA history as well as access to the cemetery. 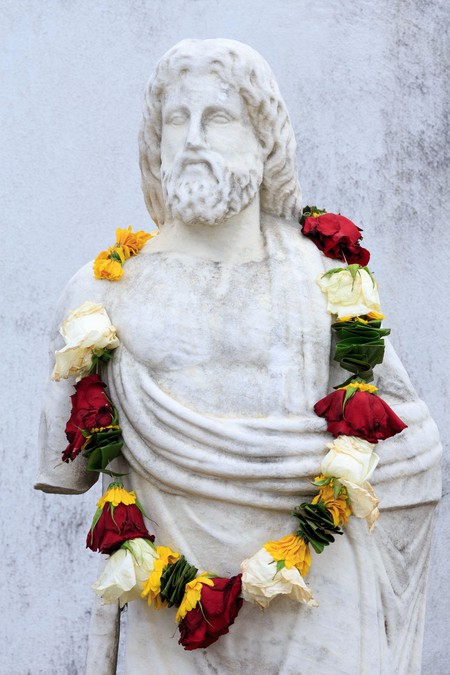 The best thing to do in the French Quarter is to get a little lost. Meander along Royal Street for world-class galleries, like Myth Gallery, and cute boutiques, like Fleurty Girl (which was once Tennessee Williams’s residence). Detour to Bourbon Street and grab a hurricane from the oldest continuously operated bar in the US, Lafitte’s Blacksmith Shop (New Orleans is rather unique in that its bars were never closed during prohibition). Visit Madame John’s Legacy, a 1700s creole cottage which is free to visit. If St Louis Cathedral is open, pop inside to see one of New Orleans’ most iconic buildings from the 1700s. Wander around Jackson Square to see the various artists who set up shop around the square. Eat the original muffuletta (New Orleans’s yummy cousin of an Italian sub) for lunch from Central Grocery along the riverwalk overlooking the Mississippi River. (Skip the lines at Café Du Monde to save its deliciousness for day three.) 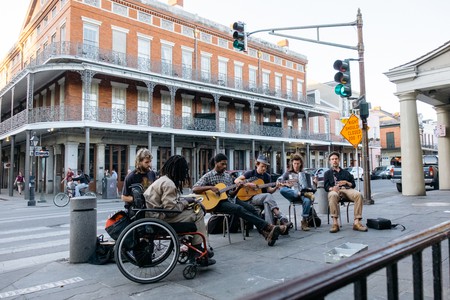 Stroll Through the Mansions of the Garden District

After grabbing breakfast at Ruby Slipper or lighter fare from Still Perkin’, begin your Garden District stroll by peering inside Lafayette Cemetery No 1 and admiring the vibrant turquoise facade of Commander’s Palace, founded by famed New Orleans restaurateur Ella Brennan (check out the documentary, Ella Brennan: Commanding the Table (2016), about her life). Then, stroll towards Jackson Avenue at the opposite end of the cemetery. Make a stop at Toby’s Corner, the oldest home in the Garden District, on Prytania Street across from the Louise S McGehee School. Make a point of wandering towards the Buckner Mansion, the largest pre-Civil-War-era home in the Garden District, on the corner of Jackson Avenue and Coliseum Street. 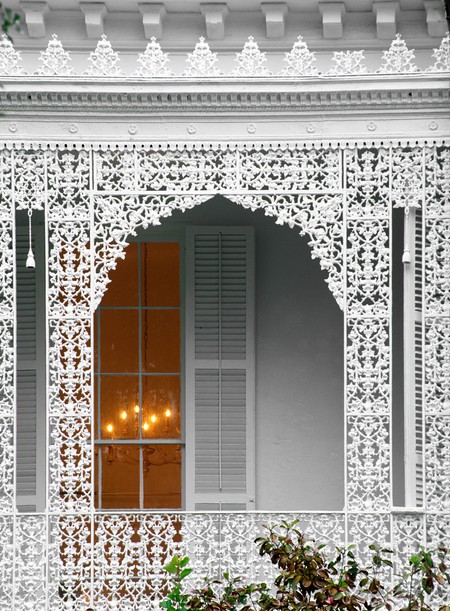 From Buckner Mansion, head towards Turkey and the Wolf (Bon Appétit’s Best New Restaurant of 2017), Stein’s Deli (an old-school, no-frills deli with the best pastrami sandwich – try the Rachel), or Lilly’s Café (a New Orleans favorite for Vietnamese food) for lunch. Then, wander around Magazine Street for cute boutiques and dive bars, or pay a visit to The Great American Alligator Museum. Be aware that Magazine Street is 6 miles (9.7 kilometers) long, so don’t stress yourself out trying to see everything. When you’re done wandering, grab a rideshare or take the St Charles Streetcar uptown to Saba for the best Mediterranean in New Orleans for dinner. Be sure to make reservations well in advance! 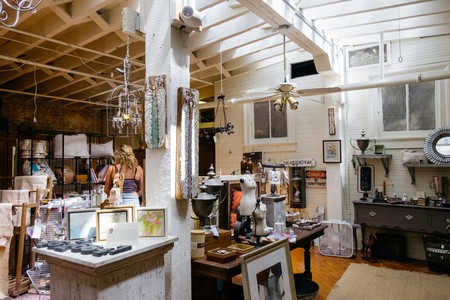 From Saba, hop in another rideshare towards Frenchmen Street. for some live music. Stroll along, and let your ears lead you into the various bars along the street. You’ll find everything from classic jazz at Snug Harbor to electronic dance music at Dragon’s Den. One of the biggest misconceptions about the New Orleans’ music scene is that it’s all jazz. New Orleans is home to a vibrant and varied music scene that’s given birth to bands like The Givers, Galactic, The Revitalists and Sweet Crude, among many others. WWOZ publishes a list of what music is going every night. 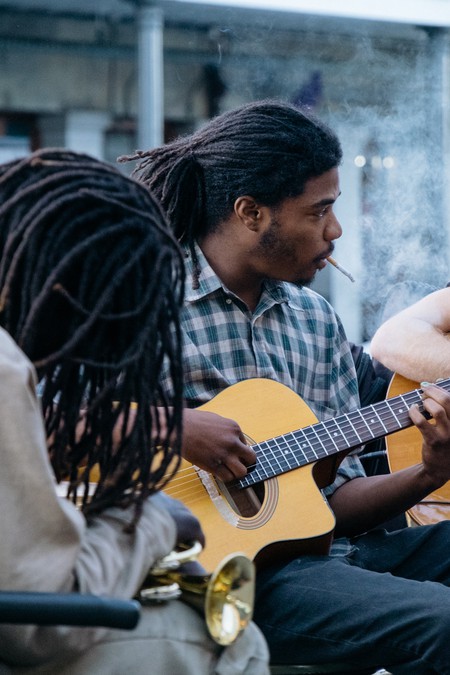 Beignets in the Park

It’s beignet time! In the morning, head to Café du Monde in City Park for beignets and café au lait – it’s more picturesque and less crowded than Café Du Monde’s other location in the French Quarter. Then wander through the New Orleans Museum of Art’s Sydney and Walda Besthoff Sculpture Garden in the city’s largest park, and escape inside one of its fabulous museums. There’s the newly renovated Louisiana Children’s Museum, the New Orleans Botanical Garden and New Orleans Museum of Art to choose from. Walk along the bayou to Parkway Bakery & Tavern to grab their legendary poor boys for a late lunch. 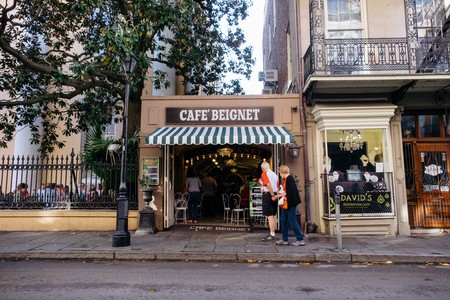 For dinner, head to Bacchanal Fine Wine & Spirits for world-class wines, mouth-watering food and live music all served in one of New Orleans’ most beloved outdoor wine gardens. If you want to extend your evening, head to the intersection of St Claude and Marigny Street for some of the best dive bars in New Orleans. There’s Kajun’s Pub with nightly karaoke and AllWays Lounge & Cabaret with burlesque, alternative plays and live local bands. Across the street, you’ll find the Hi-Ho Lounge, a great live music bar with Fry & Pie in the backyard serving up gourmet French fries and mini dessert pies. 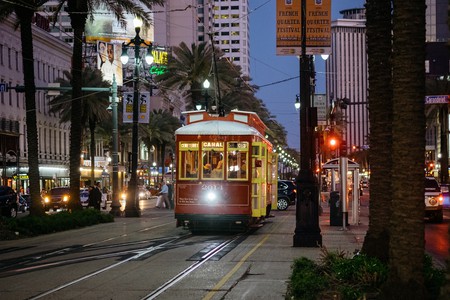