A Guide To New Orleans' Cemeteries

Built atop historic burial grounds, New Orleans is an eerie territory where century-old cemeteries are considered must-see tourist destinations while still on this side of life.

Dating back to the late 1700s, the historic ‘Cities of the Dead,’ as they are known, fill the natural landscape with elaborate stone crypts, ornate tombs, beautiful sculptures, and mausoleums. These mysterious necropolis, which are assembled above land because the city is built on a swamp, are popular among travelers because they house and honor some of NOLA’s most iconic (and infamous) characters. So grab some sturdy walking shoes and perhaps some sage, then check out the city’s most iconic cemeteries. 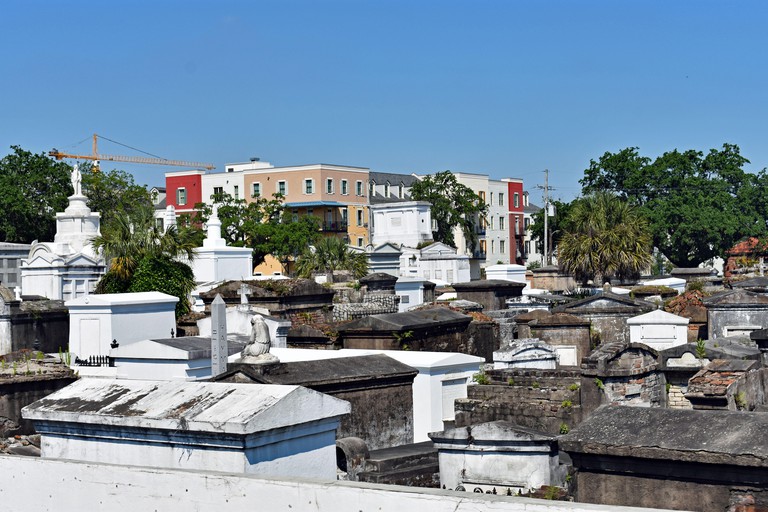 © Joe Eldridge / Alamy Stock Photo
Sure to offer a few goosebumps, St. Louis Cemetery No. 1 is the oldest and most famous city of the dead in the Big Easy. Opened in 1789, the cemetery houses over 600 fascinating above ground tombs and beautiful monuments throughout its crumbling, maze-like “streets.” Many of the city’s most notable dead are entombed in this one square block, including Voodoo Queen Marie Laveau and Homer Plessy. The site is also home to the future tomb of actor Nicolas Cage who purchased a 9-foot white pyramid tomb inscribed “Omnia Ab Uno” (Everything From One). And since the line between past and present feels thin while navigating the narrow walkways, visitors must be accompanied by a tour guide to make sure guests don’t slip from this life into another. 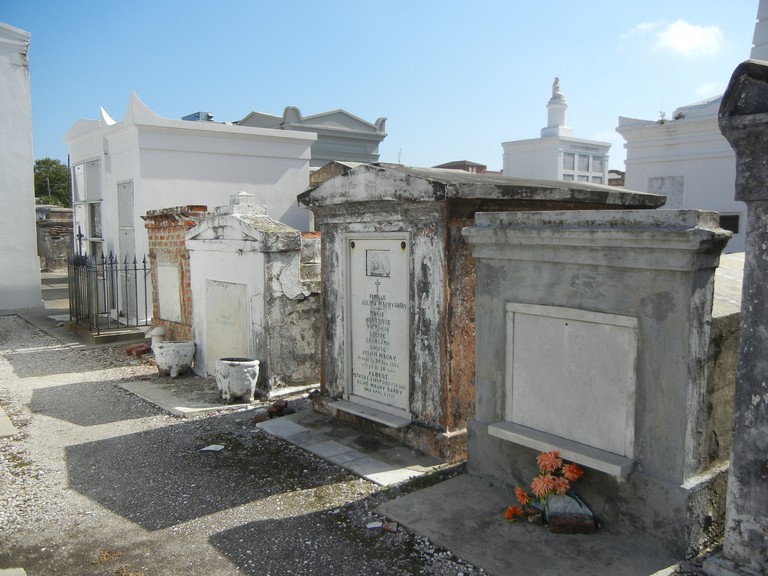 St. Louis Cemetery No. 2 | © jc99301 / Pixabay
When the New Orleans’ City Council thought the miasmas, or bad air, from the city’s central cemeteries was causing an outbreak of yellow fever and cholera, they decided to build a new cemetery in 1820 to combat the issue. Surrounded by wall vaults, ornate ironwork and Greek revival-style tombs, an eerie necropolis was created and simply called St. Louis Cemetery No. 2. Placed on the national register of historic places in 1975, this cemetery is the final resting place of jazz and R&B legends Danny Barker and Ernie K-Doe. Another famous inhabitant inside the St. Louis Cemetery No. 2 grounds is Andre Cailloux, an African American Union hero who was killed in combat during the American Civil War. 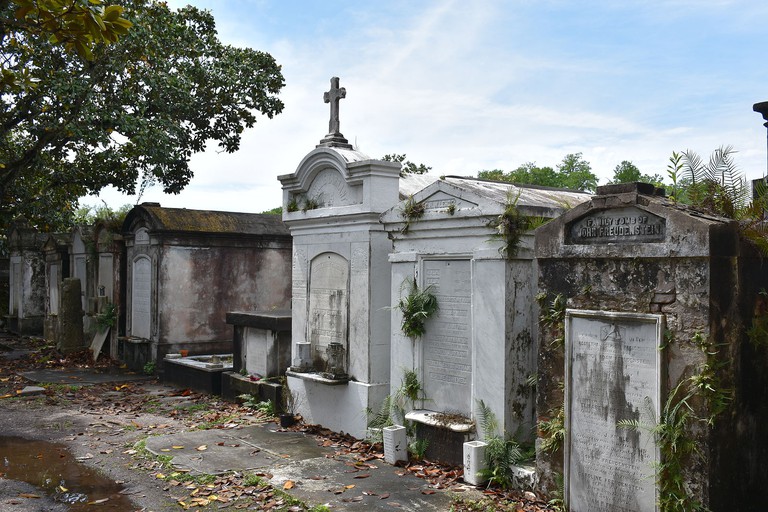 Tombs at Lafayette Cemetery No. 1 in the Garden District, New Orleans | © MusikAnimal / WikiCommons
Located in the Garden District, Lafayette Cemetery No. 1 is a non-denominational, non-segregated burial ground shaded by groves of lush greenery and opulent homes. Built in 1833, the cryptic land, which exudes a strong sense of Southern gothic, is the oldest of seven municipal, city-operated cemeteries in New Orleans. Named after the city of Lafayette, this cemetery is the final resting place of some of the city’s outcasts, including the Independent Order of Odd Fellows, the German Presbyterian Community, the Home for Destitute Orphan Boys, and the New Orleans Home for the Incurables. However, the most popular residents of the graveyard are fictional, considering author and native New Orleanian, Anne Rice, used the place as inspiration for burying The Mayfair Witches and viciously evil vampire Lestat. 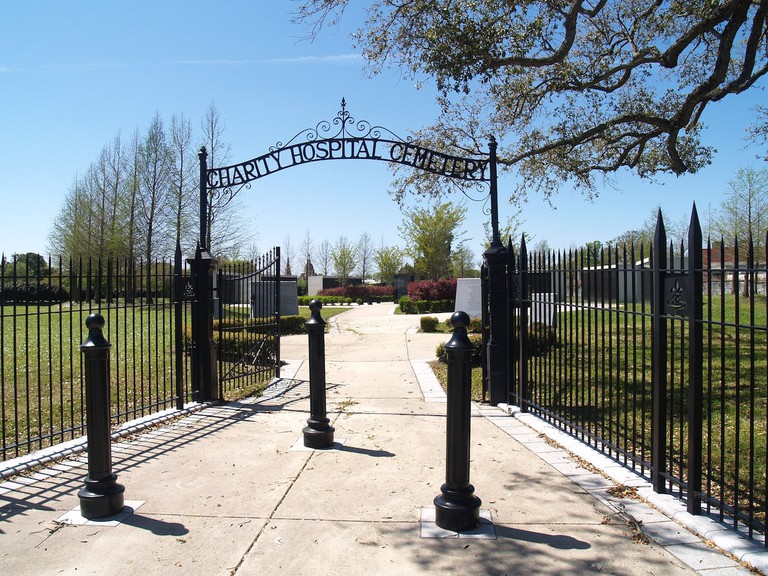 Charity Hospital and Katrina Memorial Cemetery | © Michael Homan / Flickr
Located on Canal Street, 5056 is the graveyard where thousands of unfortunate indigents claimed by yellow fever were laid to rest. The Charity Hospital, which received 87 corpses in the span of four days in 1847, closed permanently after Hurricane Katrina made its historic landfall. The Katrina Memorial, built on the site of the vanished hospital, opened in 2007 to honor the storm’s unclaimed victims. 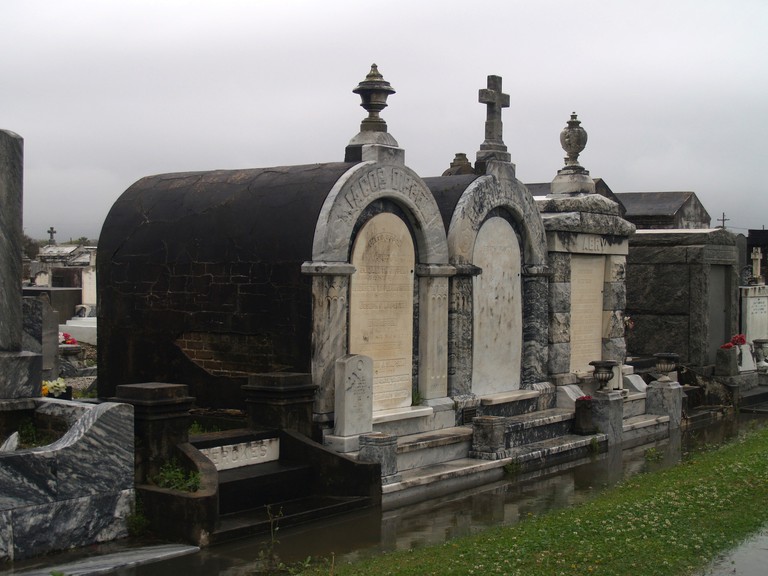 Established by the Firemen’s Charitable and Benevolent Association, the Greenwood Cemetery was founded in 1855. Greenwood is one of New Orleans’ largest cemeteries in volume, housing over 20,500 lots. Even though the entrance is adorned by five beautiful memorials, tombs in this cemetery are arranged to create maximum capacity. The memorials include the Firemen’s monument, a neo-gothic design inspired by Sir Walter Scott’s Monument in Edinburgh, the Elk’s tomb, erected in 1912 by Weiblen as a symbol of fraternity, and the tombs of Michael J. Mckay and John Fitzpatrick.