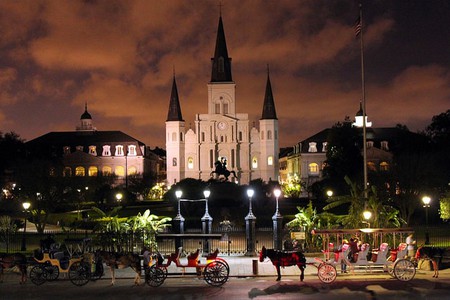 New Orleans, throughout its history, has proven to be a place of resilience and revolution. Here is a brief retelling of some of its most important historical events that have shaped its identity today.

Before it was even an official city, the first Mardi Gras celebration in the United States reportedly took place in 1699, when explorers Iberville and Bienville landed at the mouth of the Mississippi River on the day that actually coincided with Fat Tuesday. They nicknamed it “Point du Mardi Gras” and celebrated. Historical accounts differ over the next several years, but it was already a holiday observed by the French, and it’s believed that the holiday gained more momentum in what’s now New Orleans by the 1730s.

In the beginning, what is now New Orleans was a swampland filled with mosquitoes, other problematic bugs, snakes, rodents, sweltering heat and lush overgrown plants. Yet a bold Frenchman saw its potential, particularly because of its strategic location along the Mississippi River. Thus, New Orleans (known as “La Nouvelle Orléans”) was founded by Jean-Baptiste Le Moyne de Bienville on behalf of the Duke of Orleans.

In 1763, France, Spain and Great Britain signed the Treaty of Paris, a 37-year rule. It put an end to the French and Indian War and turned New Orleans into a Spanish-ruled outpost and trading partner for Cuba, Haiti and Mexico. This period also reflected Spain’s views on race, which fostered a class of free people of color. However, France eventually regained control of the colony before it was sold to the United States in the course-altering Louisiana Purchase.

In the final days of the Spanish reign, two massive fires broke out and torched a majority (more than 850) of the young city’s buildings on Good Friday that year. It would not be the first time New Orleans would have to rebuild itself and prove its resilience. Incidentally, six years after it was reconstructed, another fire broke out and burned more than 200 buildings in the process.

The Haitian Revolution was pivotal to New Orleans’ development, as refugees of both black and white backgrounds arrived in New Orleans post-revolt, often bringing slaves with them. The New Orleans governor wanted to keep out free black men, but French Creoles in the Crescent City were proponents of this migration, in part because it increased the French-speaking population of the city.

When the United States purchased more than 8.2 million square miles of territory from the French, it doubled the size of the developing nation. It was a strategic move for the third president of the United States, Thomas Jefferson, as well as one by French statesman and military leader Napoleon Bonaparte, who partially made the deal because he needed to fund the French military prior to the prospect of renewed warfare between France and the United Kingdom.

The state of Louisiana became officially admitted into the Union as the 18th state in 1812. New Orleans was initially the capital city, but now that honor goes to Baton Rouge, about an hour and a half away. Louisiana briefly seceded from the Union in 1861 during the Civil War to join the Confederate States of America and was re-admitted back into the Union in 1868.

In 1905, a massive yellow fever outbreak spread from the lower French Quarter, quickly afflicting more than 3,000 people and killing more than 400. According to sources, the virus that triggered the epidemic was believed to have arrived via a passenger, or through mosquitoes that had traveled from Central America in a load of bananas unloaded from a freighter.

The dawn of the Jazz Age – late 19th century

In the late 1800s, jazz began to emerge as a revolutionary way to combine ragtime, blues, African spiritual songs and the American songbook. Improvisational with a nod to distinctive styles, what is known as “trad jazz” (traditional jazz) of New Orleans combines brass-band marches, ragtime and blues and French quadrilles. The music is a staple of today’s music scene in the city and beyond, and it is widely viewed as one of the city’s greatest contributions to society as a whole.

Many events that contributed to the Civil Rights movement took place in the city of New Orleans. In the 1950s, segregation was in full effect across the city. According to the Global Nonviolent Action Database, the city’s black population was at 40 percent. All the white-owned shops on Canal Street had segregated facilities and didn’t serve black people at lunch counters; meanwhile Dryades Street was a predominantly black-serving shopping area, though African Americans weren’t allowed to actually work in the shops. GNAD reports, “late in 1959, Rev. Avery Alexander…and Dr. Henry Mitchell organized the Consumers’ League of Greater New Orleans, an all black organization, to fight employment discrimination.” Sit-ins, boycotts and arrests continued, culminating in a Freedom March in 1963. Slowly, public facilities were desegregated.

Before there was Katrina, Betsy struck the city in 1965 and caused massive, citywide damage.

The day after Halloween, November 1, 1967, the city adopted its new football team, the New Orleans Saints, founded by John W Mecom Jr., David Dixon and the city itself. The team’s name is both an allusion to November 1 being All Saints Day and its large Catholic population. For decades, the team experienced ups and downs, yet its fanbase remained mostly loyal (if not mocking of the team). The team’s and its fans’ efforts and loyalty finally paid off when the team advanced to, and then won, the Super Bowl in 2010, which caused a citywide celebration of unity and also elevated morale in the wake of Katrina.

It started off as a small celebration and is now one of the city’s biggest attractions. In the beginning, though, the New Orleans Jazz & Heritage Festival was founded by the New Orleans Motel Association along with George Wein (who had produced the Newport Jazz Festival and the Newport Folk Festival years before). Wein curated the first festival with the help of artistic advisers, including a young Quint Davis – then an intern – who is now the CEO and director of the whole operation. The festival now lasts for seven days and draws in both local and international acts.

The most deadly of all U.S. hurricanes, Hurricane Katrina made landfall on August 29, 2005, damaging the levee system and causing citywide flooding that killed more than 1,500 people in Louisiana and Mississippi and left 2 million people displaced or homeless. While the city continues to rebuild and gain a significant amount of the population back, many homes are still left in disrepair more than a decade later.